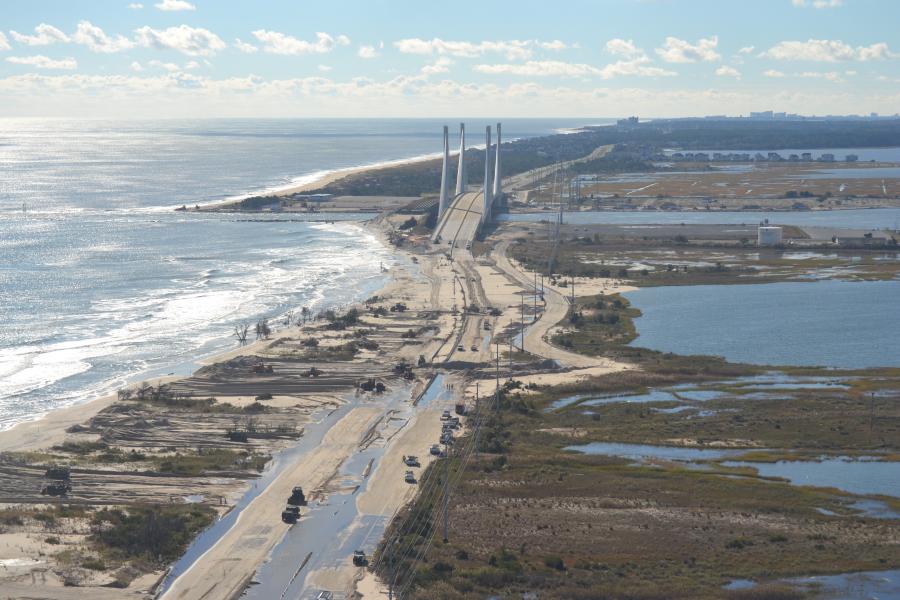 Delaware Department of Natural Resources photo Hurricane Sandy caused overwash and flooding at the north shore of the Indian River Inlet. Route 1 was closed for several days. The U.S. Army Corps of Engineers Philadelphia District helped restore the north shore by pumping more than half a million cu. yds. (382,000 cu m) of sand from the inlet onto the beach and constructing a dune.

As storms go, the one in late January was hardly worth a footnote in coastal weather history.

There wasn't much beach erosion. It didn't last very long. The waves weren't monsters. The tide wasn't even that high.

But if you tried to drive from Rehoboth to Bethany Beach, it was a big deal. The road flooded — like many others in the state — and was closed for hours, cutting off the fastest, most direct route between Delaware's beaches and neighboring Ocean City, Md. It also shut down a major north-south evacuation route.

No one is sure why such a minor storm caused so much disruption.

Gray said his own backyard, which backs up to Dirickson Creek, had a severe high tide from the Jan. 23 storm. But it was worse, much worse, in Superstorm Sandy.

Some suggest it is a signal of a stormy weather pattern — part of a normal cycle that may follow larger climate drivers like El Niño and La Niña events. Others believe flooding and water levels are increasing because more water is flowing to the Inland Bays through Indian River Inlet.

In reality, there are dozens of factors that influence coastal storm damage and flooding — how long the storm lasts, wind speed and direction, whether the worst of the storm hits at a high or low tide. Even the lunar cycle can play a role.

Throughout the state, scientists and planners are trying to get a better handle on the variables that make one storm destructive and another a non-event. They want to be able to use a growing body of data and technology such as real-time cameras and sensors to predict when roads and communities will flood.

Gray said he will ask state transportation officials to take a close look at the coast highway.

“The bridge is beautiful,” he said of the new structure over the Indian River Inlet. But the highway flooding on both sides of it may mean state officials have to invest more money to keep the road open.

One option, he said, would be to raise the road. “That's a huge expense, too,” he said. “I don't know if it's an anomaly [with the weather-related flooding], but I'm concerned about it for an evacuation route.”

State transportation officials have elevated one flood-prone road, Del. 54 just west of Fenwick Island. It, too, is an evacuation route and before the improvements was frequently closed by flooding.

Gene Donaldson, an operations manager at the Delaware Department of Transportation's Transportation Management Center, looks at these flood events just like a traffic crash or a gridlock situation.

Donaldson said he believes his team can use existing technology and real-time weather data to predict when roads such as Del. 1 will flood.

Traffic problems are simply a matter of “demand exceeding capacity,” he said. The same scenario might be said for flooding. Once the marshes fill, for instance, there is no other place for water to go.

Donaldson is part of a team that includes transportation officials and experts from the University of Delaware, the U.S. Geological Survey and the state Department of Natural Resources and Environmental Control that is working toward parameters that can better predict when flooding will occur.

When Del. 1 closes south of Dewey Beach, that means a 45-minute detour to travel 7 or 8 mi.

Donaldson said he tried to do flood predictions for Del. 1. Before the storm, he gathered elevation data from the road edge and the crown of the road — where the road surface is at its highest.

Then, throughout the storm, he monitored tide gauges and water levels.

He also installed a temporary camera on the highway near Key Box Road, one of the chronic flooding spots.

“We were pretty good at determining when water would be over the road,” he said. “My goal is we want to be more predictive. Technology will allow us to do it.”

For the last year or so, Assistant State Climatologist Kevin Brinson has been gathering data from 13 sensors around the Inland Bays.

Brinson helped develop the real-time Delaware Coastal Flooding Monitoring System. That lets coastal residents from New Castle south to Lewes to use a slider to see the impact of forecast tides on the Delaware Bay and River communities.

Brinson said the predictive data was pulled from a National Oceanic and Atmospheric Administration model, but a similar model for Delaware's Inland Bays is still five to six years away.

The sensors will help gather the data that can be used to develop a similar flood monitoring tool for Rehoboth, Indian River and Little Assawoman bays.

Harder to determine, Brinson said, is why the floods are happening. There is some evidence, based on work done by the National Oceanic and Atmospheric Administration's National Ocean Service, that more frequent nuisance flooding — the higher-than-normal flooding we see during smaller storms or lunar events — is caused by rising sea level.

In Delaware, there could be another factor. During Hurricane Irene, Steve Callanen's dock washed away at his home at Quillens Point on the south side of Indian River Bay.

“It helps immeasurably,” he said. “The other docks will be submerged” during a higher-than-normal high tide.

He's lived in the development for 20 years, and he's seen a steady rise in the base tide levels from the bay.

Callanen attributes the rise to more water than ever flowing in through Indian River Inlet.

“I have been extremely frustrated trying to bring this to the attention of state officials and officials in the federal government,” he said.

The Center for the Inland Bays 2016 State of the Bays report also raised the question of whether a deeper inlet — when it was originally stabilized by the federal government in the 1930s, it was 500 ft. (152.4 m) wide and 14 to 15 ft. (4.3 to 4.6 m) deep — has contributed to higher high tides and wetland drowning in the inland bays.

“It seemed to me it was so logical,” Callanen said. “You're going to have more water getting into the bays with every tide cycle.”

Jeffrey Gebert, a coastal planner and oceanographer with the Army Corps of Engineers in Philadelphia, said he doubts Del. 1 floods more because of the inlet.

He blames the overall rise in sea level.

“It's clear, regardless of what the cause is, sea level has risen a foot in the last century,” he said. “There has been a real measurable rise in sea level.”

That means if you had identical parameters to a storm that occurred a century ago, the impact of the same high tide would be greater today, he said.

That flood, he said, would be about a foot higher.

“Sea level rise makes everything worse when you are talking about a storm,” Gebert said.

Flooding pinch points change over time. During the March Storm of 1962, much of the roadway was inundated and covered with sand during the storm that lasted 96 hours over five consecutive high tides. The ocean and inland bays met during the worst of the storm and the coastal dunes were flattened.

Before beach renourishment, the ocean typically broke through the dunes at Dewey Beach. During a fast-moving storm in January 1992, a storage shed was lifted off its foundation and blocked part of Del. 1 through Dewey Beach.

The north side of Indian River Inlet was also a trouble spot until post-Superstorm Sandy repairs were made in 2013.

During Nor'Ida, a hurricane that merged with a nor'easter in November 2009, the ocean broke through the dunes at the north side of the inlet and a car was nearly submerged in the water.

And then there was Superstorm Sandy, where the ocean destroyed parts of the old inlet bridge approach. Del. 1 was closed for days while state road crews removed as much as 5 ft. (1.5 m) of sand.

But the tide gauge data, alone, may not tell the whole story.

Callanen said he believes the persistent higher tides are impacting the marshes, which help absorb water during major storms.

“There's no question whatsoever that water levels have risen,” Callanen said. “What exacerbates that are the winds.”