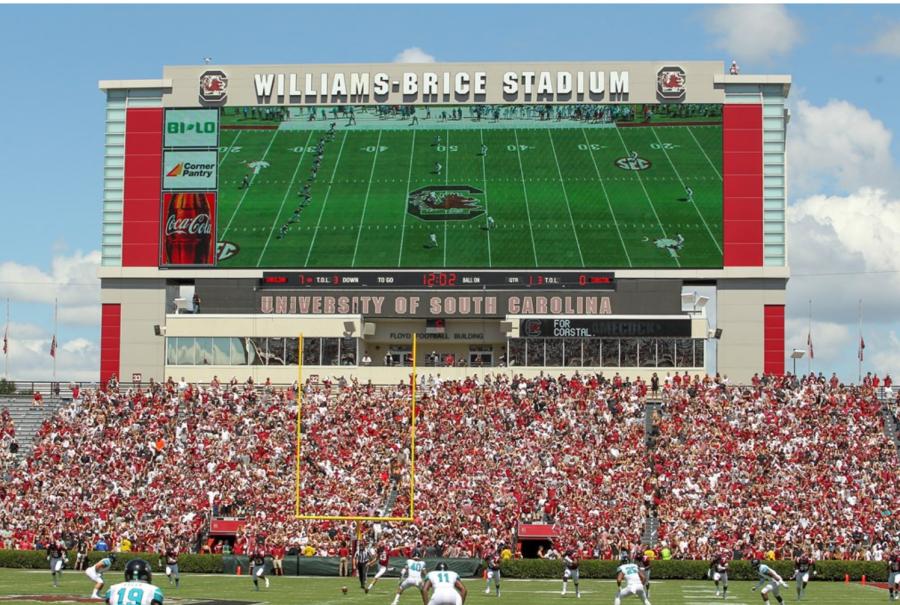 The 77,559-seat stadium is set to showcase a slew of enhancements to its football gameday setup this fall. (Gamecock football photo)

The University of South Carolina's Williams-Brice Stadium in Columbia is debuting a handful of improvements in 2022, but it might not be the last set of upgrades in the not-too-distant future.

At the recent Southeastern Conference (SEC) spring meetings, USC Athletic Director Ray Tanner told Columbia's The State newspaper that the school has not closed the door on further changes to the football stadium. Rather, it is kicking around new ideas even as the latest round of renovations to the facility enter their final stages.

"We've talked about other things we could do," he explained. "I don't want to get into too much detail, but yes, we're having conversations about ... the future Williams-Brice, and things that we can continue to do to provide a greater fan experience."

The 77,559-seat stadium is set to showcase a slew of enhancements to its football gameday setup this fall, The State reported June 11, adding another layer of excitement for those anxiously awaiting Head Coach Shane Beamer's second season in charge of the USC football program.

A new lighting system — examples of which have made the rounds on social media in recent weeks — are atop the list of shiny new toys being added to the facility. USC also is adding ribbon boards to the interior of the stadium.

Other updates to Williams-Brice for this year include expansions to the west main concourse, the installation of two new 200-level elevators, improvements to concessions stands and building more restrooms.

An October 2021 university news release announcing the projects estimated the west main concourse renovations would cost $2.3 million, while the additions of the 200-level elevators will cost another $2.4 million. Those elements of the upgrade are expected to be funded by donors.

The improvements come on the heels of the recent debut of four renovated club level lounges in 2020 amid the COVID-19 pandemic. They were part of a $22.5 million premium seating project that lowered stadium capacity by almost 3,000 seats.

"We're still fighting the challenges to COVID presented us," said Tanner. "We're still trying to play catch-up as hard as we can. That starts with the excitement that Coach Beamer has created. We need to … sell tickets. It's no secret that football is [our] bellwether and we're on a pretty good pace right now."

Tanner also noted that hope remains to build a permanent home for the USC Athletics Hall of Fame — a longstanding wish — although he added that nothing is pending.

A facility dedicated to honoring outstanding USC athletes down through the decades has been discussed for years, according to The State. However, with the school still recovering financially from the pandemic and further construction on Williams-Brice Stadium potentially on the horizon, that project might have to continue to wait.

"We haven't identified an area or space yet where we would do it," Tanner explained, adding that if an athletic hall of fame were built, "Ideally, I think [it would have] to be somewhere in proximity, if not in Williams-Brice, to the [stadium] grounds."

A building there, he said, would be an ideal stop for fans in town during football weekends.

USC operated at a more than $750,000 loss during the 2020 fiscal year, according to documents obtained by The State. The school also reported less than $5 million in profit between its total operating revenue and total operating costs during the 2021 fiscal year, marking the third consecutive year it has done so after hitting that mark every year between 2015 and 2018.

Despite that, Tanner is willing to fight to upgrade USC's athletic facilities to bring them on par with the school's SEC competitors, including the national powerhouse programs at the University of Georgia and the University of Alabama.

"Despite going through the pandemic, despite all the things that you have to fight through, you can't throw up your hands," Tanner said defiantly. "You've still gotta plow ahead. We're in the Southeastern Conference. We're not looking at each other like, ‘Y'all slowing down?' We're trying to do the very best we can, and I don't think you get to be the best conference in the country if you take it any other way."