A multi-million dollar project in Texas, will result in the world's first ultra-accessible splash park. 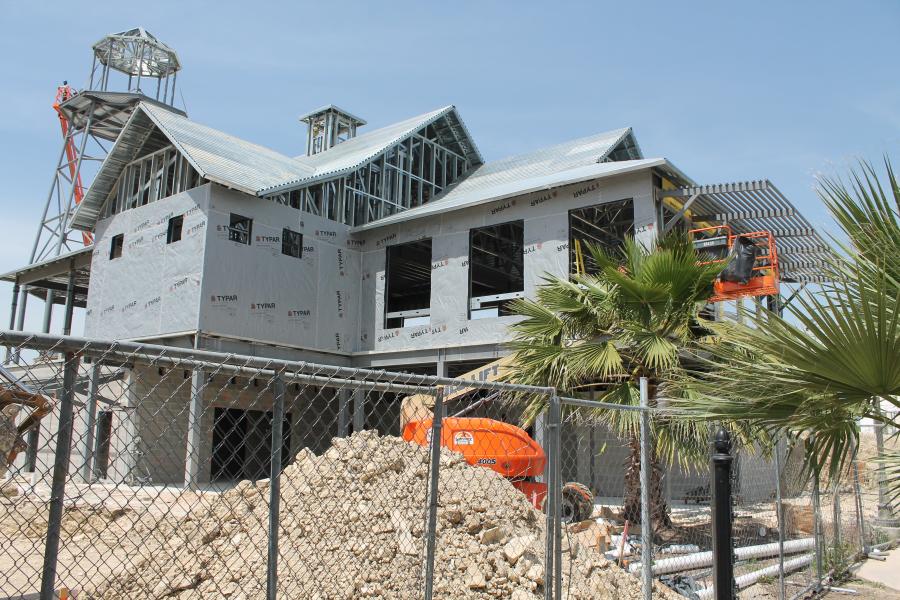 morganswonderland.com/ photo. A $13 million project in San Antonio, Texas, will result in the world’s first ultra-accessible splash park, set to open in the spring of 2017.

“It's hard to describe, it's such a neat place,” said Bob McCullough, communications director of Morgan's Wonderland. “Because of its success, we want to expand and offer a water-based experience. It can get pretty warm in Texas in the summertime, and we got a lot of comments from guests that it would be nice to have a place to go to for splashing and playing, so we're now creating Morgan's Inspiration Island, and it's going to be located adjacent to Morgan's Wonderland.”

Morgan's Wonderland is built in what at one time was a limestone quarry, and one of the holdover features of that quarry is an eight-acre lake, which has been incorporated into the park. Morgan's Inspiration Island is immediately opposite Morgan's Wonderland on the other shore, so it offers a beautiful panoramic view overlooking the lake toward Morgan's Wonderland.

“It will be tropically themed, and it will include one water ride and a number of tropically themed splash pads where folks with and without disabilities can get wet and have fun and really enjoy themselves,” McCullough said. “Since this is the world's first splash park designed to accommodate individuals with physical and cognitive special needs, the challenge is to make sure that it's ultra-accessible, i.e., a splashy place without barriers so everyone can have fun.”

Gordon Hartman, the driving force behind Morgan's Wonderland, also is supervising construction of Morgan's Inspiration Island, using the expertise he gained during many years of building homes in the Greater San Antonio area. He sold his homebuilding business in 2005 to devote his energies to helping those with special needs. His inspiration is his daughter, Morgan, 22, who has dealt with cognitive and physical issues all her life.

Hartman describes himself as “a bricks and sticks guy,” and basically served as the general contractor for both parks.

“Morgan's Wonderland opened in the spring of 2010, and thus far has had approximately a million guests from all 50 states, and 65 other countries, so the word is definitely getting out that this is a tremendous place for accessibility,” McCullough said. “We accommodate both those with and without special needs, and inclusion is the focal point of Morgan's Wonderland; it will also be the focal point for Morgan's Inspiration Island. Gordon's premise is that you bring together those with and without disabilities in a fun atmosphere, and they learn about each other — they respect each other and come away with a better understanding of each other.”

McCullough stated that negotiations are under way with a university to create special waterproof wheelchairs.

“If a guest comes in their own wheelchair and it can't be dampened or gotten wet or anything like that, we'll have facilities for transferring these individuals into our own waterproof wheelchairs so there won't be any damage done to their personal wheelchair,” he said. “We're hoping to make some announcements along those lines a little bit later on this fall, but it's not quite ready yet.”

The dominant theme element in the park is a lighthouse towering 77 ft. 6 in. (23.6 m). Clustered around it are splash pads, a water ride, areas to sit and relax and snack areas.

The River Boat Adventure ride will twist and turn more than an eighth of a mile through a jungle setting with bird and animal sounds in the background. Five water play areas — Hang 10 Harbor, Rainbow Reef, Shipwreck Island, Castaway Bay and Calypso Cove — will offer a variety of splashy elements such as raintrees, falls, pools, geysers, jets, water cannons and tipping buckets.

Just like Morgan's Wonderland, every element will be wheelchair-accessible. Waterproof wristbands with RFID technology will be available so parents can go to a location station and easily ascertain the whereabouts of their children and other members of their party.

“This has never been done before, just like Morgan's Wonderland had never been done before,” McCullough explained. “Actually, the element, the design, the amenities — this is all done from brainstorming by parents of special needs individuals, by doctors, by therapists, — just a whole range of folks who have a great affinity for the special needs community, and they came up with lots of great ideas that were transformed into Morgan's Wonderland, and the same process has gone on with the creation of Morgan's Inspiration Island.”

He noted that they have had lots of visitors from not only across the country but from around the world wanting to know how they did things. They willingly share information because they hope that other parks will be created across the country and the world that will be of benefit to individuals with special needs.

The parks are nonprofit and anyone with a special need, whether it be physical or cognitive, gets in free of charge. Therefore, fundraising is ongoing, to contact generous individuals, companies, family foundations and other groups in order to raise the money necessary for operation and maintenance for the long term.

According to Hartman, the splash park has been designed with water conservation in mind. Water used in the various play elements will be continuously filtered and recirculated, and it will be stored in huge underground tanks when the park is not in operation.

Construction equipment currently in use at the three-acre site includes excavators, loaders and man lifts.

Sizes for the attractions are: