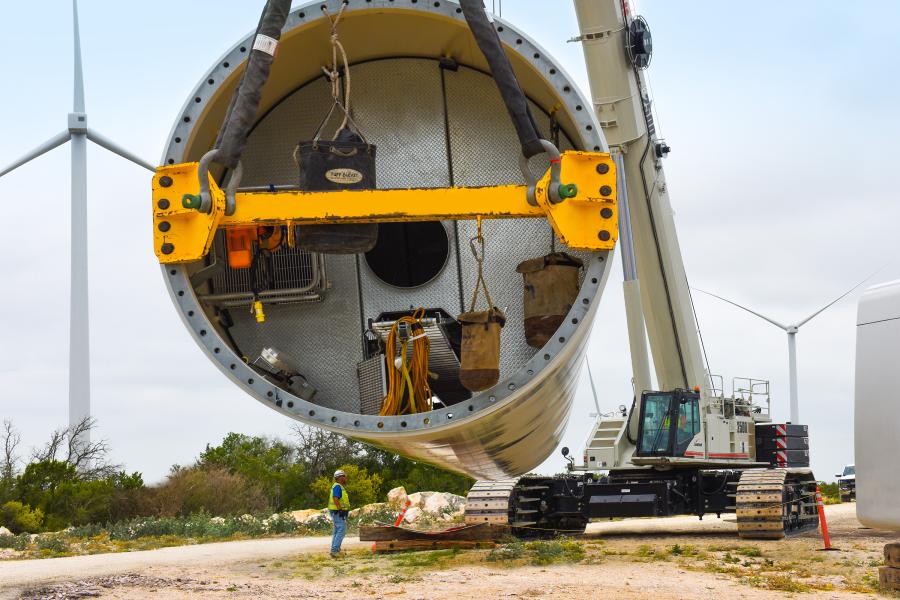 A TCC-2500 telescopic crawler crane was brought on site as an assist crane for building and constructing 262 ft. (80 m) wind turbines with rotors (hub plus blades) weighing up to 146,000 lbs. (66,224 kg) in difficult ground conditions. 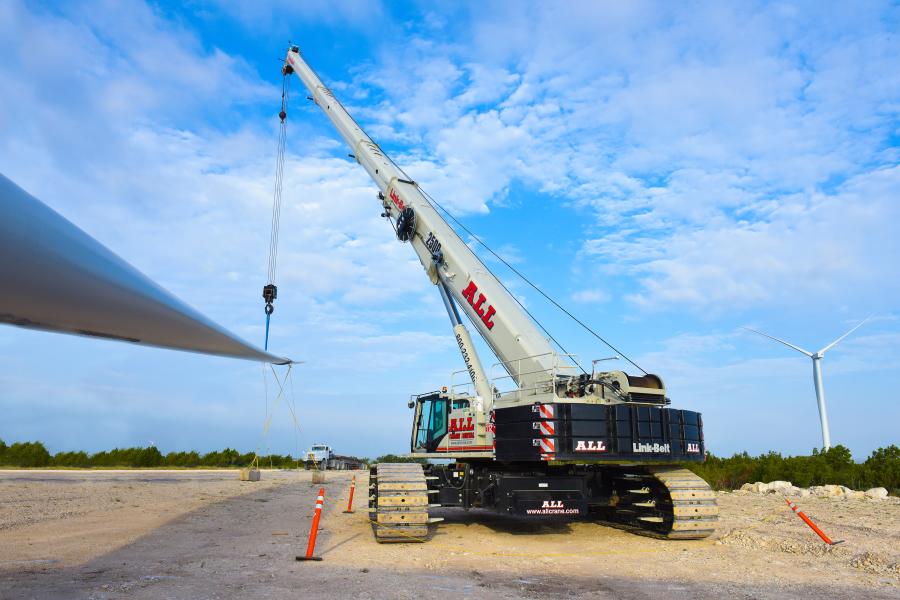 A 250-ton (230 t) TCC-2500 telescopic crawler crane was brought on site as an assist crane for building and constructing 262 ft. (80 m) wind turbines with rotors (hub plus blades) weighing up to 146,000 lbs. (66,224 kg) in difficult ground conditions. The TCC-2500 proved to be a valuable asset on the project lifting top can sections weighing up to 47,000 lbs. (21,318 kg), tailing rotors, building hubs or assisting with lifting the boom of the larger lattice crawler cranes.

“Up front Mortenson reached out saying that they had a site in Texas that was more challenging than normal,” said Scott Jerome, senior branch manager at Dawes Rigging and Crane Rental.

The network of roads connecting each of the 69 wind turbines was one major challenge.

According to Rick Paullus, Mortenson TCC-2500 operator, “Usually these wind jobs are on a grid, this one we started on one end and basically had to go all the way around on string roads. So the TCC-2500 travelled close to 70 miles on this job, over the most uneven terrain possible. We've gone close to three miles in a single day.”

“Mortenson explained that they were going to need a telescopic rig of some sort, with larger capacities than even a 130 to 150-ton class rough terrain crane. The crane would assist in picking and carrying the boom assembly on the big 600 metric ton top out cranes for numerous wire ducks in some difficult terrain. The first thing that came to mind was our new TCC-2500,” said Jerome.

“It [TCC-2500] handled the wire duck really well, then as we went along, sometimes the large lattice crane couldn't get to the blades to build the rotors, and so we had a few rotors that had to be built with the TCC-2500,” said Paullus.

Paullus has been a crane operator for six years, but this was his first telescopic crawler crane to operate.

“When I heard that we were getting the 2500 I was really excited, mainly because it was a new crane. My only concern was because of the terrain, not because of the load chart, I was just anxious to see how it worked out and it has exceeded all of my expectations,” said Paullus.

“The site in Kansas is supporting a couple other wind farm projects that are going up in the plains states. RJ Corman's project team loves the crane. In short, we are quite pleased with our entrance into the large tele-crawler market with the TCC-2500s,” said Jerome.