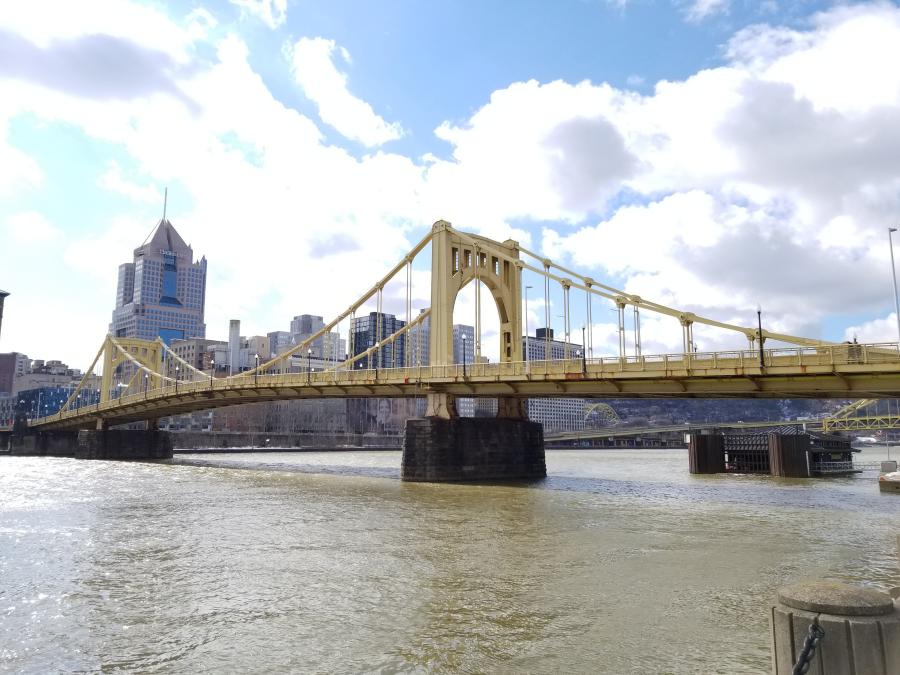 The Roberto Clemente (Sixth Street) Bridge in Pittsburgh, Pa., is undergoing a $34.4 million bridge rehabilitation project for the Department of Public Works.

The contract was awarded to Mosites Construction and Development Company of Robinson, Pa., for a total amount of $34,477,777. Funding comes from the Federal Highway Administration (FHWA), Pennsylvania Department of Transportation (PennDOT) and Allegheny County. 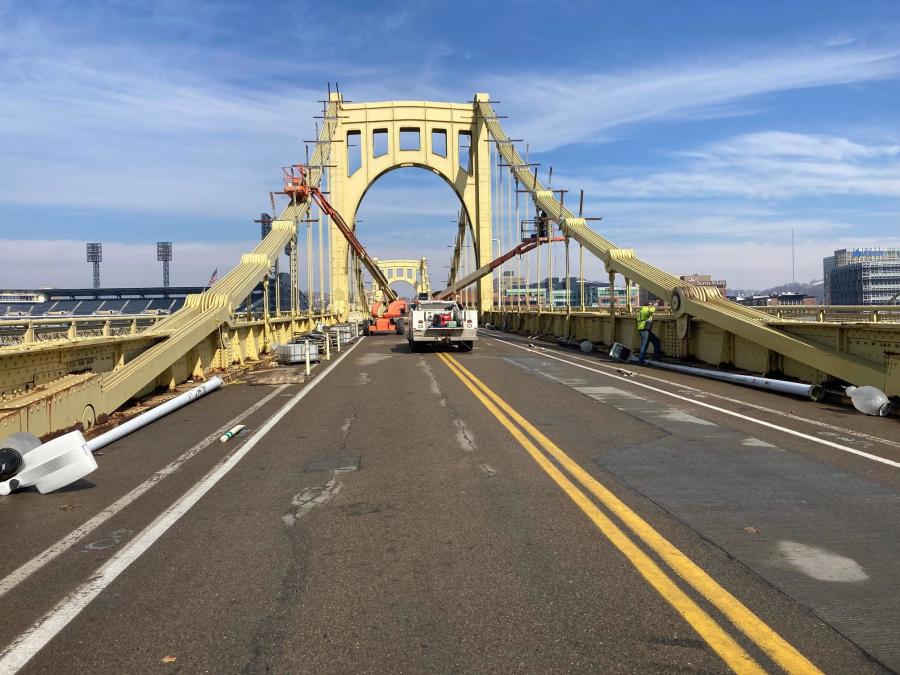 Other work, including the cleaning of the exposed masonry surfaces on the Roberto Clemente, Andy Warhol and Rachel Carson Bridges, will be done along with placement of rock scour protection around the Roberto Clemente Bridge and Rachel Carson Bridge piers in the Allegheny River. The handrails on the bridge side of Fort Duquesne Boulevard also will be repainted Aztec Gold.

"We are required to maintain a 39-foot clearance for Allegheny River traffic within the 180-foot navigation channel beneath the bridge's midspan," said Brent Wasko, public information officer of the Allegheny County Department of Public Works.

"During construction, we will be installing and using an underdeck platform that can sag with heavy loads, and river water levels change. So, river navigation coordination with the U.S. Coast Guard and Waterways Association of Pittsburgh as well as maintaining marine radio contact is crucial to the safety of our contractors' workers and those on passing river vessels."

Another challenging aspect noted is the fact that the Roberto Clemente Bridge is near PNC Park, Heinz Field and downtown entertainment venues.

"So, we will need to coordinate traffic during many special events, especially during Pittsburgh Pirates games," Wasko said.

During the project, coordination also is required with local utility companies as they remove their old lines and install new ones.

"During the construction, we will need to install temporary bridge tie-downs at Piers 2 and 4 to resist uplift at the existing bearings with enough anchorage capacity to replace the existing eye-bar anchorage system," Wasko said.

He reported that the Roberto Clemente Bridge design is rarely used today. In fact, it is one of just five self-anchored suspension bridges still in use in the United States.

Wasko explained that the existing bearings consist of two eye-bars embedded through the concrete and stone piers using the weight of the pier to help hold the end of the bridge down on both ends. Those embedded eye-bars are then pinned to an articulating arm connected to the ends of the stiffening girder. During this project, all four sets of bearings will be replaced with new bearing assemblies that will have drilled rock anchors to increase the tie-down capacity.

According to Wasko, the bridge's concrete deck is still functioning with an original, non-composite deck design resting on steel buckle plates.

"That outmoded concrete deck type has had cracking issues that have needed extensive repairs," he said. "During this project, the deck will be with a new composite deck by adding shear studs and channel-type shear connectors across the stringers, increasing the deck's overall flexural strength capacity."

As part of preserving the historic appearance of the Roberto Clemente Bridge, Wasko said that more than 15,000 tension control bolts will be installed during this project to simulate the look of rivets.

He noted that the Roberto Clemente Bridge's original primary contractor, American Bridge Company, came up with the pioneering approach to construct the bridge without using falsework in the river. They converted the eye-bar chain and girder system into a truss by adding temporary diagonal members to cantilever the bridge over the river on both sides, allowing construction toward the midspan. 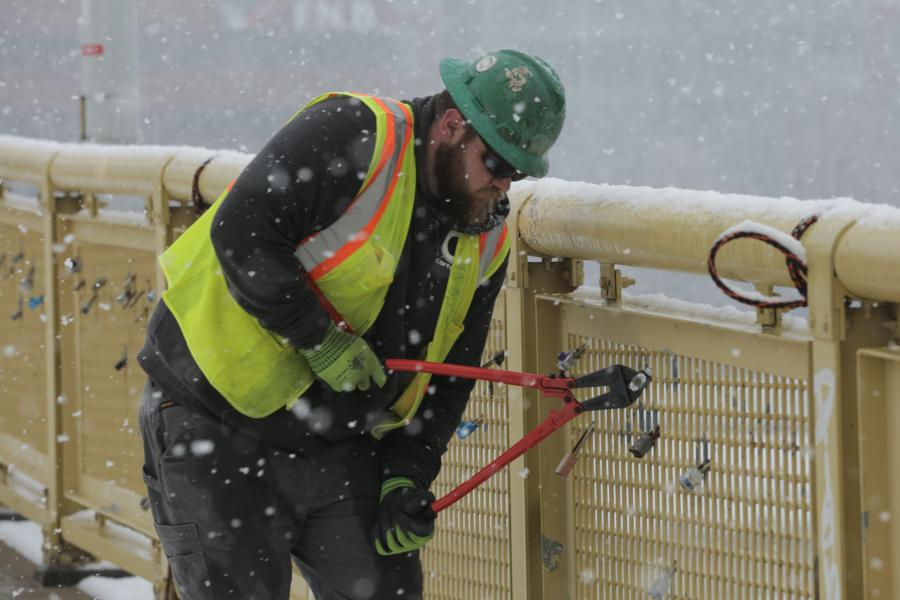 One unusual aspect of the project was the removal of approximately 11,000 locks that had been placed on the bridge over time by citizens. They were donated to the Industrial Arts Workshop of Hazelwood, a nonprofit organization that teaches students of all ages about sculpture creation and artistic literacy, including the fundamentals of welding, design, engineering principles, and safety standards. The school also promotes collaboration and teamwork, career readiness, as well as community service and engagement.

"The Clemente Bridge is an iconic symbol of Pittsburgh, and one that visitors and residents alike are familiar, but it too needs some love," said County Executive Rich Fitzgerald. "This significant infrastructure investment will complete the rehabilitation of the third Sister Bridge and also allows the opportunity for a unique, sustainable reuse of the many locks that have been added to the bridge over the years."

It will be up to Industrial Arts Workshop Executive Director Tim Kaulen to determine what will be created using the locks and where the art will be displayed.

"I am excited for the opportunity to receive the locks, which are individual expressions from so many people who placed their thoughts and wishes in public," said Kaulen when the project began. "It doesn't take much imagination to visualize the web of connections between these locks and the journeys they took to reach such a special place in our community. I look forward to using the locks in a future public artwork that pays tribute to their origins and what brought them together on the Roberto Clemente Bridge."

Residents and visitors who placed locks on the Roberto Clemente Bridge were encouraged to remove them before the start of construction. The locks that remained after construction began were cut off of the bridge's handrails.

The current railings on Roberto Clemente Bridge were installed in 2000 and are still in good condition. Plans were made for them to be removed, repainted and reinstalled as part of the project. When the railings need to be replaced during a future project, Public Works plans to explore designs that discourage both graffiti and lock placement.

Public Works requests that residents and visitors stop placing locks on the Roberto Clemente Bridge and other county-owned bridges. The locks can damage bridge railings, add extra weight to the railings than they were designed to hold, and are expensive and time-consuming to remove in bulk.

"Unlike those projects, the Roberto Clemente Bridge rehabilitation project will not result in a new lane configuration," he said. "It will continue to have two lanes — one in each direction — for vehicle traffic and two bicycle lanes." 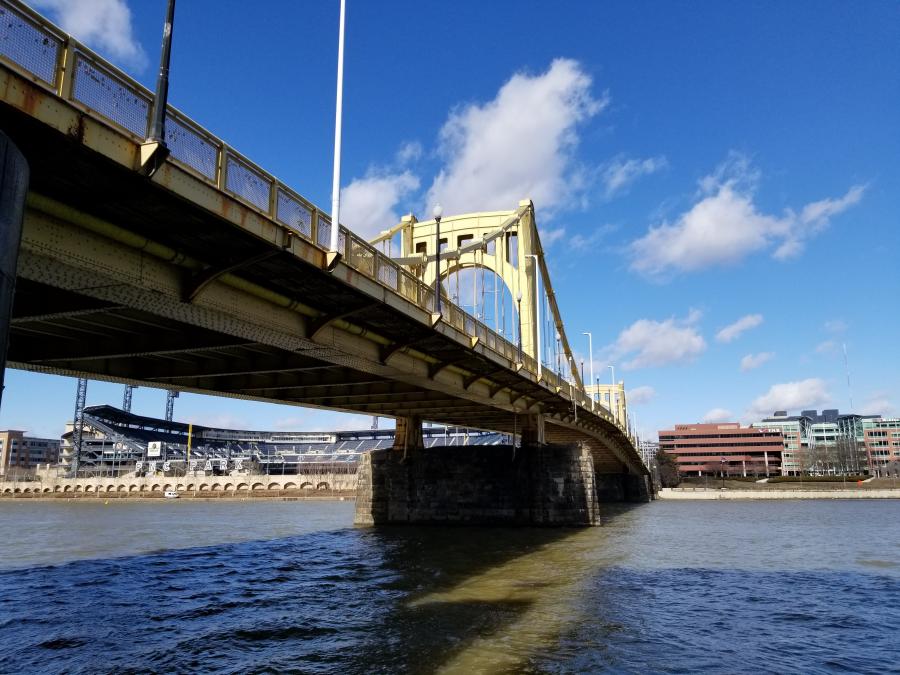 The Roberto Clemente Bridge opened in 1928. It carries 7,895 vehicles daily across the Allegheny River. The Sister Bridges are the only trio of identical bridges in the world and the first self-anchored suspension bridges in the United States.

Shanley reported that the bridge was last inspected in 2021. The deck, superstructure, and substructure are all rated 5, or in "fair" condition. The report states that the bridge's "… primary structural elements are sound …" CEG