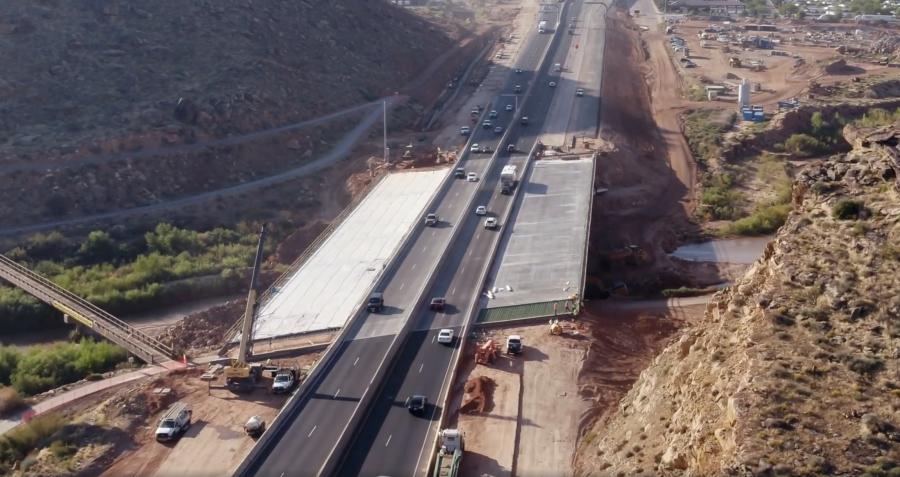 UDOT has 169 construction projects statewide that are currently in progress or scheduled to start this year, with a combined value of $2.1 billion.

The Utah Department of Transportation (UDOT) announced its list of Top 10 Construction Projects for 2019. Topping the list is the extension of Mountain View Corridor from 4100 South to S.R. 201 in Salt Lake County. This 4-mi. stretch of brand-new highway will provide a critical link for western Salt Lake County drivers by connecting this important north-south highway to an existing freeway.

UDOT has 169 construction projects statewide that are currently in progress or scheduled to start this year, with a combined value of $2.1 billion. Each year the department works to meet current and future growth by adding lanes and building new highways, trails, and bridges, while at the same time focusing on an aggressive maintenance program to keep the transportation system in good condition. Projects within the Top 10 include two brand-new highway extensions; new lanes added to freeways and highways; interchange redesigns; bridge maintenance and replacements; and several miles of trails and new pedestrian crossings.

I-15 Express Lanes — Davis and Weber counties, $169 million: This project will widen I-15 to four lanes in both directions by adding Express Lanes between Hill Field Road and Riverdale Road. Once complete, UDOT's Express Lanes will be 80 mi. long — the longest continuous Express Lanes in the country. Construction starts in May and will extend through 2020.

I-15 Northbound — Salt Lake County, $165 million: A new collector/distributor ramp system (similar to the ones from 900 South to 2100 South in Salt Lake City) will be added to northbound I-15 from 9400 South to I-215. In addition, a new northbound travel lane will be added from Bangerter Highway to 9400 South. Major construction starts later this year, with the project scheduled for completion in 2020.

I-15 Technology Corridor — Utah County, $415 million: UDOT is in the second year of this three-year project to widen I-15 from S.R. 92 to Main Street in Lehi. The freeway is being expanded to six lanes in both directions, and the interchanges at S.R. 92 and 2100 North are being reconstructed. A new bridge over I-15 at Triumph Boulevard, and new one-way frontage roads east and west of I-15, are already open. This project is scheduled to wrap up in late 2020.

I-15 Southbound — Salt Lake County, $180 million: Work continues on the I-15 Southbound widening project. Crews have already opened a new southbound lane on I-15 from 7800 South to 12300 South. This year, crews are extending the new lane from 2100 South to 12300 South, and reconstructing southbound ramps at the I-15/I-215 interchange in Murray to reduce delays and help traffic flow more efficiently between the two freeways. Construction is scheduled through 2020.

U.S. 40 — Wasatch County, $37 million: UDOT is extending the westbound passing lane on U.S. 40 by 5 mi. near Strawberry Reservoir, and repaving an 18-mi. section of the highway from Daniel's Summit to Soldier Creek. Crews will also add a wildlife crossing to reduce collisions between vehicles and animals. Work begins this month and is scheduled for completion in summer 2020.

I-80/S.R. 36 Bridge Replacements —Tooele County, $37 million: This project is replacing the S.R. 36 ramp bridge over I-80, and two I-80 bridges over the Union Pacific railroad tracks near the S.R. 201 junction. Work continues from last year and is scheduled to be complete in 2020.

I-15 Exit 16 — Washington County, $29 million: UDOT is rebuilding the I-15 interchange at S.R. 9, including widening I-15 and S.R. 9, as well as the on- and off-ramps, to improve access to northern Washington County and Zion National Park. Construction started in February and will be finished this fall.

I-80 Joint Repairs — Salt Lake County, $3 million: This bridge maintenance project will repair and replace bridge joints at several locations along I-80 between State Street and 1300 East. Drivers should plan for moderate to heavy delays during nights and weekends, as several lanes will be closed on I-80 while work is underway. Construction starts later this spring and will wrap up in late summer.