Moving the City: A New Dawn for Kiruna 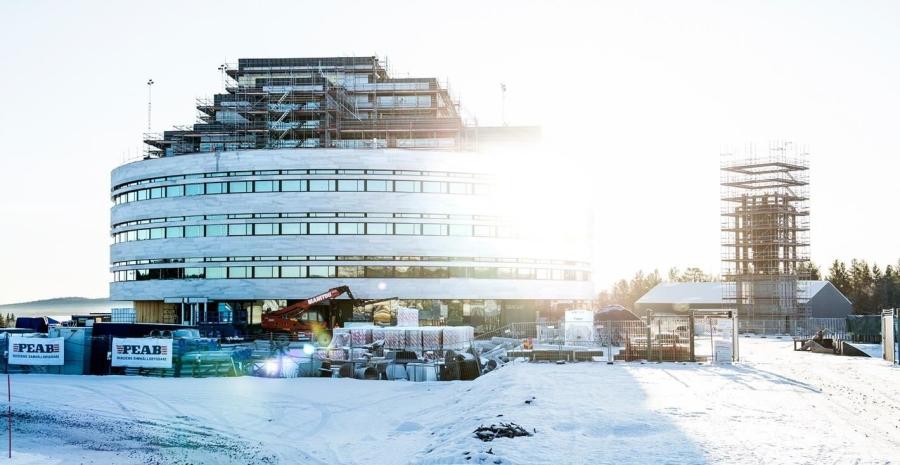 The new Kiruna City Hall in the making.

Every night, just over an hour after midnight, a rumbling arises from the ground under Kiruna. Most people living here are so used to the sound that they don't even react. LKAB's nightly explosions are a part of the everyday life of this city, located 145 kilometres north of the Arctic Circle.

“The mine and the city are mutually dependent, and this is how it has been since the very beginning. The community was established thanks to the mine being founded here. And that's still the way it is today," said Land and Development Manager Eva Ekelund of Kiruna Municipality.

Author Jens Karrman interviewed Ekelund in Kiruna's City Hall, one of the city's true landmarks. The building was designed by architect Artur von Schmalensee, and it's considered one of Sweden's most beautiful public buildings. Kiruna City Hall is also an important meeting place for locals.

“It serves as a living room for residents, and is used for a wide variety of activities. Even though it dates from the 1960s, it's still going strong today,” Ekelund said.

Now, however, its era is over. Next summer, the politicians and civil servants will leave the classic brick building and move to the new City Hall, a round building known as 'Kristallen' ('The Crystal').

But why leave a fully functional and well-liked city hall?

The windows of Kiruna City Hall offer a view over the mine. The problem is that every year, that view creeps a little closer. Slowly but surely, the nightly blasts are eating away at the rock below the city.

The mining company LKAB first made the announcement that cracks were forming faster than previously thought 14 years ago. The next year, the municipality issued a historic press release. The title, "We are going to move a city," immediately drew global attention.

The orebody that LKAB is mining slopes under Kiruna, and is slowly but surely claiming the land the city stands on. If mining is to continue, large parts of the city must be dismantled. It is an enormous project.

In total, the project encompasses 3,000 apartments, the city's commercial centre in its entirety, 800 hotel beds and key infrastructure. In addition to this, several historic buildings, such as Kiruna's beautiful wooden church, will be moved. LKAB estimates that as much as 6,000 people, half of the city's population, will have to move to new homes.

“But, of course, all residents of Kiruna will be indirectly affected in one way or another,” said Ekelund.

Three kilometres north of the old City Hall, its replacement is well on its way to completion. The new building will be ready for use next summer. If everything goes according to plan, Kristallen becomes a meeting place for Kiruna residents, just as the current City Hall is.

To make that easier, a little bit of the old has been combined with the new. In October, the old City Hall's beloved bell tower from 1963 was transported from the old site to its new home, next to Kristallen.

The project to move the city has been underway for almost a decade. The railway was moved five years ago, and the last residents of the Ullspiran district – the first neighborhood to be affected by the extended mine – moved out in 2015.

But for many, the city move has gone more or less unnoticed, with the majority of residents so far unaffected by the transformation in their day-to-day lives. This is set to change in the coming years.

Over the course of 2017, the move has gained momentum in a big way. During the year, many of Kiruna's most historical buildings have been moved to a new area close to the city's slalom slope. Hundreds of people accompanied Hjalmar Lundbohmsgård, the home of the first manager of the mine and the founder of Kiruna, as it was moved in three pieces on trailers.

At the same time, the embryo of the new city center is starting to take shape around the new City Hall.

However, one of the year's most important events cannot be seen with the naked eye. In summer 2017, a date was set for shop owners to move to the new city center. During the fourth quarter of 2020, in good time before the Christmas shopping period, Kiruna's new city center will be opened for business.

“By then, it must be ready. No restaurants will want to open their doors if they find themselves alone on a construction site, so it's important that everyone moves in at the same time,” said Göran Cars, professor of Urban Planning at the Royal Institute of Technology in Stockholm.

Since 2013 he has been spending a great deal of time in Kiruna to help municipal leaders with the move. Creating a city from the ground up is every urban planner's dream.

Kiruna offers the opportunity to correct the mistakes many cities made in the 1960s and 70s.

Instead of building a spread-out city where people live, work and shop in different places, the aim is now for Kiruna to have a small, dense center. When the shops and restaurants move to the new city center, half of the new Kiruna will be completely finished.

“It will be a mix of homes, offices, hotels and shops. This is important,” said Cars.

Over the next decade, Kiruna's current center will be dismantled. This also means that several thousand residents will need to move in the space of just a few years.

“We have to be constantly one step ahead. The new homes have to be ready several years before people need to move. People need time to think about what kind of living arrangements they want,” Cars stressed.

Kiruna's transformation project is not by any means just about building housing and business premises. All infrastructure, both above and below ground, must also be replaced. Next year the construction of a new stretch of European Route E10 will begin.

This means plenty of work for construction companies and contractors, primarily in northern Sweden. Volvo CE having a major market share in Sweden will place growing demands on the local organization.

“The challenge of being a large company is that service demands are high, too. Customers expect machines and equipment to be serviced quickly if something goes wrong, so it pays to be on your toes,” said Urban Widell, local manager in Kiruna for Swecon, Volvo CE's retailer in Sweden.

Kiruna has a decade of upheaval ahead of it. The magnitude of the changes means that Kiruna residents sometimes need to remind themselves that it's not all work. A whole new city being paid for by LKAB is, after all, something other municipalities can only dream of.

“Even though it's a major upheaval for the city, we have to remember that this is a significant opportunity for us to create a new, modern and sustainable community,” said Ekelund.