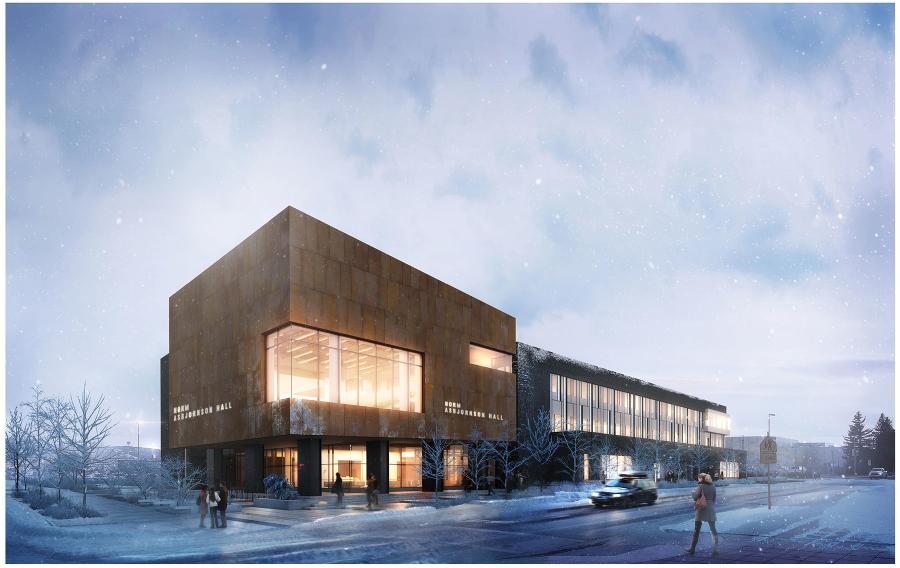 Design plans for Montana State University’s new Norm Asbjornson Hall have been finalized, and construction of the new facility is scheduled to begin this fall.

Design plans for Montana State University's new Norm Asbjornson Hall have been finalized, and construction of the new facility is scheduled to begin this fall.

The approximately 110,000 sq.-ft. building will house parts of the MSU College of Engineering and the MSU Honors College. It will feature nine classrooms, 17 laboratories and a presentation hall called “Inspiration Hall” that will seat approximately 300 people, according to Walt Banziger, director of MSU Campus Planning, Design and Construction. It also will feature an “Innovation Alley” where engineering projects will be on display, as well as large windows overlooking Grant Street to let in natural light.

“We are thrilled about this building's design and look forward to beginning construction this fall,” said Brett Gunnink, dean of the College of Engineering. “Norm Asbjornson Hall will be a game-changer for our growing student body, for engineering education and for research and economic development in Montana.”

The building has been carefully designed to promote dynamic interdisciplinary engagement, meaningful student-faculty interaction, and accelerated innovation that responds to and anticipates emerging trends in education, industry and society, Banziger said. For example, he noted that the classrooms will be able to be configured in multiple ways to address the needs of different classes and students. And, informal gathering spaces located throughout the hall — such as large stairs where people can sit down and talk — will also provide opportunities for students and professors to discuss ideas, work on projects and otherwise collaborate outside of class.

“Innovation thrives in a collaborative environment, and we also know that diverse, inclusive teams promote innovation,” Gunnink said. “With this building we strive to create a place where teams of students, faculty and staff will create the innovations necessary to improve the human condition for future generations.”

With record enrollments at MSU and in the College of Engineering, Norm Asbjornson Hall also will help the university continue its work to address a much-needed backlog of classroom and study space, Gunnink said. He noted that the building's classrooms and auditorium will simultaneously accommodate approximately 415 students, while informal study spaces scattered throughout the building will provide room for approximately another 400 students. The building also will include three computer labs that are dedicated to classroom work.

Norm Asbjornson Hall and the university's new South Campus Project — which will include a 550-space parking garage that is currently under construction — is being funded by a $50 million pledge from MSU alumnus Norm Asbjornson and an additional $20 million match.

Asbjornson, who is a native of Winifred, a town of approximately 200 people in north-central Montan, announced the pledge in March of 2014. It is the largest private gift in the history of the state.

“I am excited to see the amazing growth of MSU and the College of Engineering,” he said during a 2014 press conference announcing the pledge. “I hope my gift challenges and inspires others who are in a position to advance the university that has given us so much. MSU needs our support now and this is the time to give back.”

Asbjornson, 80, is the founder and president of AAON, a NASDAQ-traded heating, ventilation and air conditioning (HVAC) manufacturer based in Tulsa, Okla., which has reported annual revenues in excess of $300 million and more than 1,300 employees. Asbjornson earned a degree in mechanical engineering from Montana State in 1960. He also received an honorary doctorate in engineering from MSU and the Montana Board of Regents in 2004.

Since the pledge was announced, MSU has worked with A&E Architects of Billings, Mont., ZGF Architects of Seattle, Wash., and Martel Construction of Bozeman, Mont., to plan and design Norm Asbjornson Hall. Throughout the planning and design process, MSU officials have met with students, faculty, staff and community members in meetings and open forums in order to obtain input on the project and present design concepts.

Groundbreaking for the new building is scheduled Sept. 22. More information about the groundbreaking will be shared closer to that date.

Currently housed in Roberts Hall, Cobleigh Hall and portions of Barnard Hall (formerly the Engineering and Physical Science Building), the MSU College of Engineering offers 10 degrees and is home to some of the university's most successful research groups, centers and institutes in terms of student involvement, discovery and economic development. The College of Engineering also has been one of the fastest growing colleges at MSU in recent years, and from fall 2010 to fall 2015 grew 57 percent, or 1,311 students.