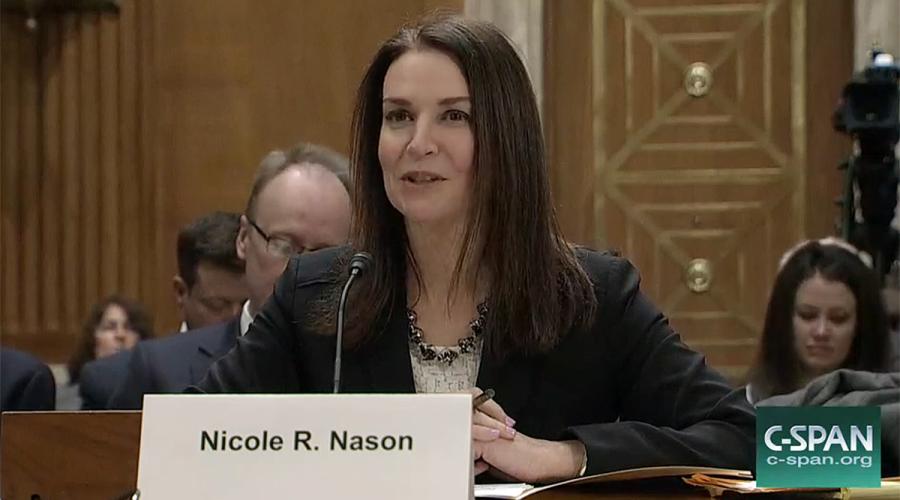 “My priority is safety on all roads, but we must recognize and address some of the unique safety challenges faced by rural communities,” Nason said in her testimony.

During a hearing before the Senate Committee on Environment and Public Works on Jan. 29, Nicole Nason said that, should the committee confirm her nomination as administrator of the Federal Highway Administration, she plans to place a special focus on rural roadway safety.

"My priority is safety on all roads, but we must recognize and address some of the unique safety challenges faced by rural communities," she said in her testimony.

In 2017, Nason said 37,133 people lost their lives in U.S. highway crashes. Yet, as an example of how rural communities are "disproportionately" affected by road safety issues, 17,216 of those fatalities occurred on rural roads, representing 47 percent of total fatalities for 2017 – even though only 19 percent of the U.S. population lives in rural areas.

"This is not acceptable. The only acceptable number is zero," she said. "If confirmed, I will tirelessly support FHWA's leadership role in providing safety-related assistance and resources to our stakeholders as we work towards a common goal of zero deaths on our nation's roads."

Other issues Nason plans to focus on if confirmed as the FHWA's next administrator include:

Jim Tymon, executive director of the American Association of State Highway and Transportation Officials, voiced his support for Nason's FHWA nomination and urged the committee to approve her.

"The Trump Administration made a wise choice with its nomination of Nicole Nason as the next FHWA Administrator. Given her nomination hearing today which was well-received by both sides of the aisle, we ask for a speedy approval by both the Committee and the full Senate," he said in a statement. "Not only has Nason served as administrator of the National Highway Traffic Safety Administration, she has also held the position of assistant secretary of government affairs at USDOT. We look forward to working with her to advance our nation's transportation infrastructure goals through a strong partnership between FHWA and our state transportation departments."

"I applaud President Trump's nomination of such an accomplished and dedicated public servant," Sen. Barrasso said in his opening statement. "She brings impressive, meaningful experience in federal transportation policy to this critically important position."

He added that the authorization of federal highway programs "will expire in September of next year," with the Congressional Budget Office projects the Highway Trust Fund will become insolvent sometime in 2021," Sen. Barrasso said.

He also stressed that America's transportation infrastructure "faces a lot of challenges" and that for "far too long" FHWA has lacked Senate-confirmed leadership.

Ranking Member Sen. Tom Carper, D-Del., made a special note of the HTF's revenue issues in his remarks at the hearing.

"Last year, we spent about $13 billion more from the Highway Trust Fund than we collected in revenues. Next year, that deficit will be even greater," he said. "To pay for the FAST Act, we took $70 billion from the general fund and other programs. For the next five-year transportation bill, we will need to find an additional $85 billion just to keep our programs at the current funding level. Despite spending more than we collect, we still aren't even spending enough [as] the backlog of money needed to rehabilitate and improve highways and bridges has grown to $800 billion."

"That's why we must work together in this committee to write and pass a bipartisan highway bill that upgrades America's roads and bridges in a fiscally responsible manner, and do it in this Congress," Sen. Barrasso explained. "We successfully worked together to pass comprehensive, bipartisan water infrastructure legislation. Now let's come together to fix our highways, roads and bridges."