The Block Island Wind Farm will reportedly supply most of Block Island, R.I.’s power while reducing air pollution across southern New England for years into the future. 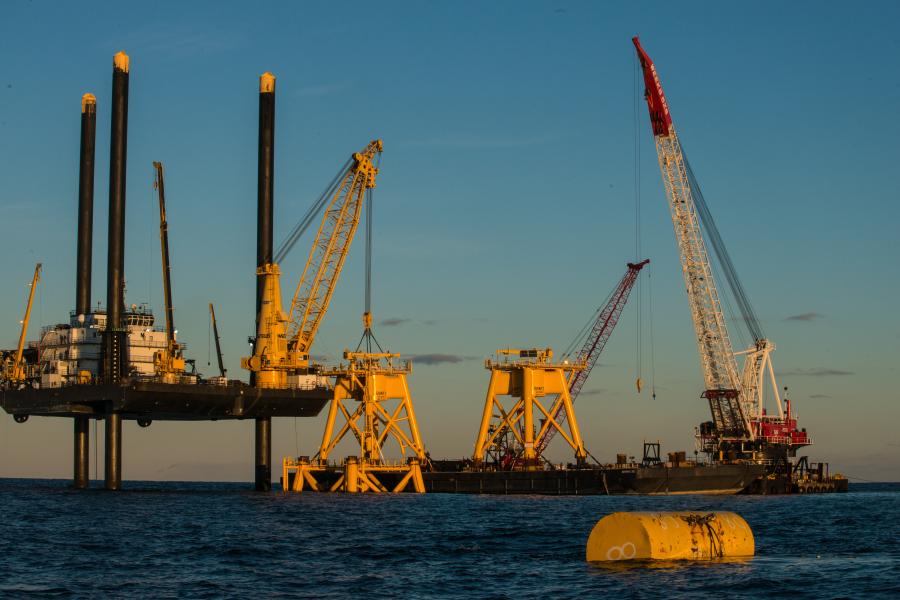 The construction of a 30-megawatt, five-turbine offshore wind farm, the first of its kind in the United States, is on schedule for completion later this year, at a reported cost of $290 million. The Block Island Wind Farm will reportedly supply most of Block Island, R.I.'s power while reducing air pollution across southern New England for years into the future.

The farm is located approximately 3 mi. (4.8 km) southeast of Block Island. The first offshore construction season was completed at the end of 2015, when all five steel jacket foundations were fully installed at site.

“From the first 'steel in the water' in July to the last deck lift in November, we've completed a season of firsts — not only for the Block Island Wind Farm but also for the launch of a new American offshore wind industry,” said Jeffrey Grybowski, Deepwater Wind CEO. “We are proud of the work we've accomplished so far, but we've only just begun — and 2016 will be a year to remember.”

“With this project, we're putting hundreds of our local workers to work at-sea and at our world-class ports to build a project that will help diversify Rhode Island's energy mix and protect our environment. I applaud Deepwater Wind for their successful first offshore construction season, and I look forward to seeing the project fully operational and generating renewable energy in 2016.”

During the 18-week construction period last year, approximately 200 workers (100 of them local) and a dozen construction and transport barges, tugboats, crew ships and monitoring vessels were active at the project's port.

In all, more than 300 local workers will be involved with building the Block Island Wind Farm. Deepwater Wind is utilizing four Rhode Island ports, Block Island, Galilee, Quonset Point and the Port of Providence, to complete construction and staging.

According to Deepwater Wind, all construction activities have been completed in accordance with strict environmental rules set by state and federal government agencies. In 2013, Deepwater Wind voluntarily agreed to a series of protective measures to minimize potential underwater noise impacts on North Atlantic right whales during wind farm construction.

“We are especially proud that our work was done while upholding very high environmental standards,” Grybowski said.

Deepwater Wind and General Electric established a new temporary manufacturing facility at the Port of Providence for the assembly of turbine components. GE (which recently completed its acquisition of Alstom's offshore wind unit) is supplying the 6-megawatt Haliade 150 offshore wind turbines for the Block Island Wind Farm. Approximately 60 local workers will be involved in this aspect of the project.

GE's work will include the installation of the electrical, mechanical, and safety equipment within the bottom tower sections now at ProvPort, with the remaining tower sections arriving in Rhode Island next year.

Some construction and staging work also is being completed at Quonset Point, in North Kingstown, R.I. Fabrication of some of the foundation components was completed by local welders at Quonset's Specialty Diving Services in early 2015, and the port continues to host construction work and vessel staging for the wind farm. Quonset also will host the project's long-term operations and maintenance facility.

The project is scheduled to be in-service and generating power in the fourth quarter of 2016.