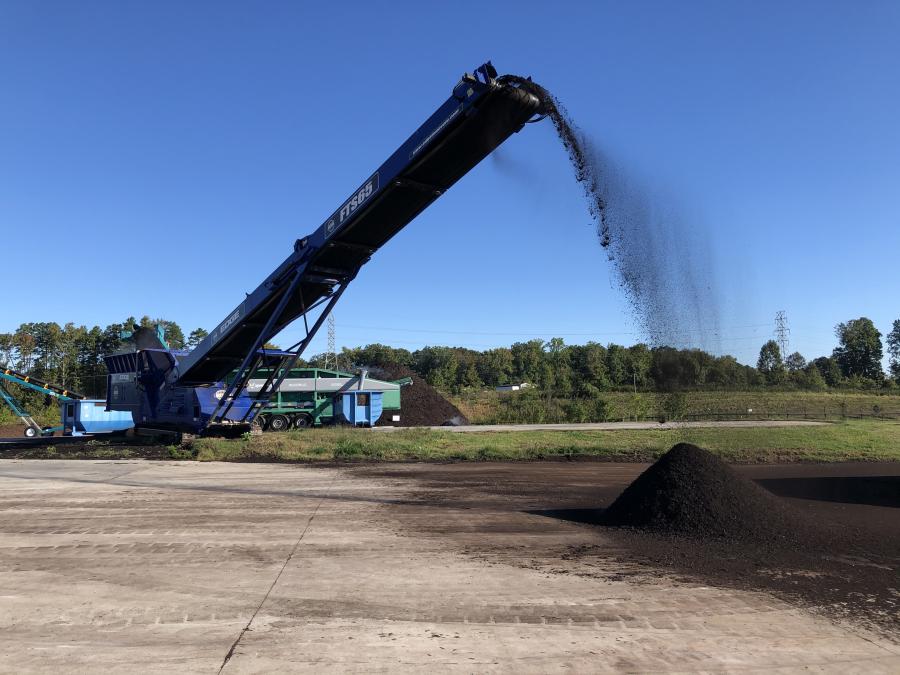 The county relies on a pair of EDGE FTS65 Mulch Master machines to help produce its composting product.

North Carolina's Mecklenburg County is the state's largest in terms of population with just more than 1.1 million residents. Along with its county seat, Charlotte, Mecklenburg is one of the South's major urban centers.

Charlotte-Mecklenburg has epitomized the exponential growth of the New South over the past several decades. Fifty years ago, for instance, the county's population was just more than 354,000 people, meaning that it has more than tripled in size since 1970.

That growth has helped generate a lot of infrastructure building in and around Charlotte with new roads, interstates and bridges needed to handle the influx of people and transport of freight.

But it also has generated much more solid waste than in years past, and with an emphasis on disposing trash and debris in an environmentally friendly manner in 2020, Mecklenburg County has stepped up its efforts from those of the past. 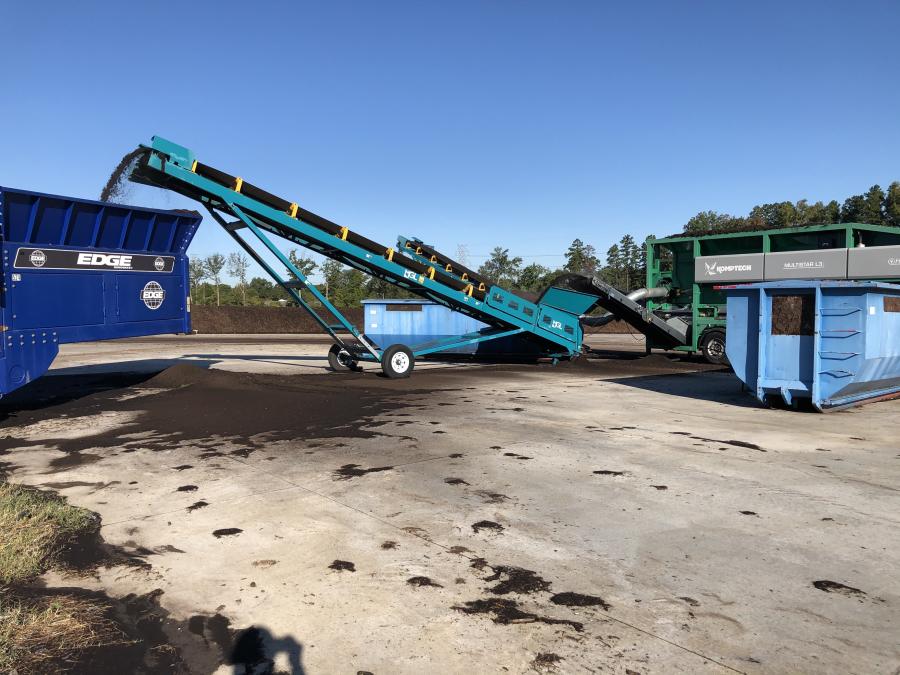 Among its several landfills and waste facilities, the county maintains four full-service recycling centers. Among them is the Compost Central and Recycling Center at 140 Valleydale Road in Charlotte, which processes the majority of the county's estimated 132,000 tons of yard waste each year. That material is then turned into a mulch and compost product.

"What we get comes from commercial customers, as well as residential and municipal customers," said Steve Hoffman, operations manager of Mecklenburg's Solid Waste facilities. "We'll receive the material at our scale, they pay the fees associated with the amount of material they have — we charge $27 per ton. The material is then brought to the drop zone, where it is pushed to be ground, then placed into windrows."

Hoffman spoke from the 42-acre Valleydale Road center where his crews were busy moving tons of autumn leaves and tree waste through the entire recycling process. The large site is completely paved, with 25 acres being concrete and the rest having an asphalt surface.

On hand to help move that debris along the processing line at the facility are an array of different pieces of equipment, he said.

"We've got a Vermeer 7000 tub grinder here, which is among six grinders we use county-wide," he described, "plus we have two Diamond Z's, a second Vermeer, two Tana shredders, and we are renting a Haas slow speed shredder right now."

The county also relies on a pair of EDGE FTS65 Mulch Master machines to help produce its composting product.

Purchased from the Charlotte location of Hills Machinery, both EDGE Mulch Masters are used at the Valleydale Road site to process environmental waste, at the same time aerating and adding moisture to the debris through the machines' large, 10-cu.-yd. hoppers before the resulting compost is moved into piles.

"The EDGE machines are reliable, serviceable and fairly priced," Hoffman added. "And they are unique, too, because we haven't seen anything like the EDGE Mulch Master out there prior to visiting with Hills Machinery and EDGE."

Prior to utilizing the EDGE line, he said the county's processing of yard waste each fall was always more difficult and costly because the materials picked up at street-side are stuffed into plastic bags by homeowners. 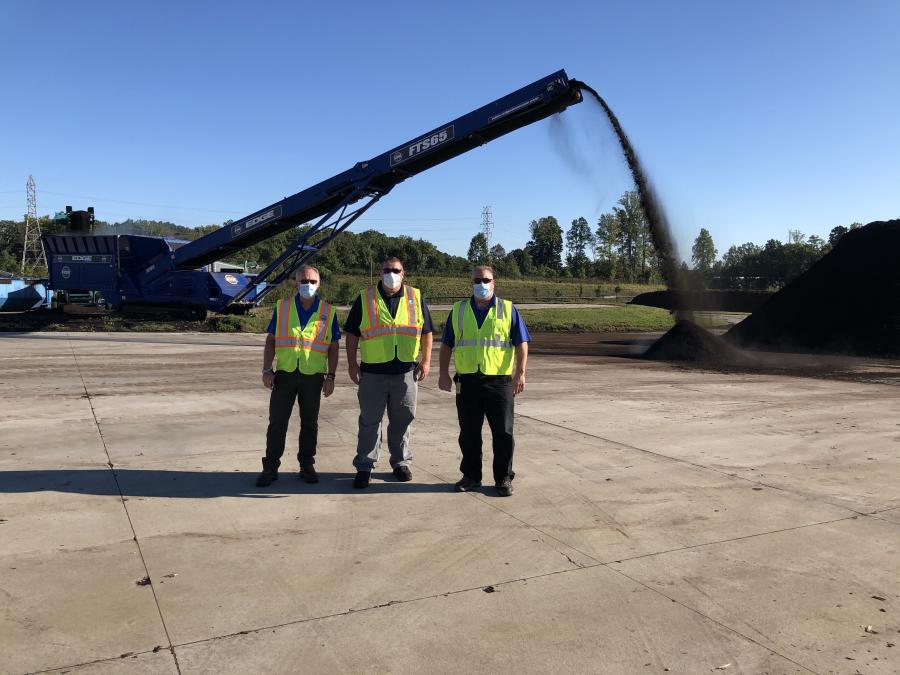 "During leaf season in Mecklenburg County, we collect roughly 15,000 to 20,000 tons of leaves in plastic bags and we have to separate the bags from the leaves for us to process [the natural waste] in a compost or mulch product we can sell," Hoffman said. "For 15 years, we hired temp agencies to send people to us to cut open the bags with razor blades to separate out the leaves."

Again, Hoffman and his department turned to EDGE and Hills Machinery to help the county find another more efficient product for dealing with bagged yard waste.

"We spoke to a lot of people over the years with hopes of finding a machine that could do that for us and we were not able to until we met with EDGE and Hills," he said. "EDGE designed and built a trommel screen equipped with cutting knives that separates the plastic from the leaves — something that was done for our specific needs."

Hoffman said the crews at Valleydale Road now send the bags through a slow screen shredder first before depositing them and their contents into an EDGE TRM622 mobile trommel. As the bags tumble, the plastic gets caught on the knives, and lets the debris pass through a pick station and onto an EDGE MS80 stacker for placement into windrows.

He added that the EDGE trommel, in tandem with the stacker, allows the recycling center to do twice the volume of work in half the time. Whereas before, the compost center was taking in 10,000 tons of leaves in plastic bags and spending four months to sort through the waste, Hoffman said the operation now processes 20,000 tons of natural detritus in two months with the EDGE equipment.

"The stackers are extremely helpful, and we're looking to get another one," he continued. "[Having one] takes a loader out of the operation, which allows us to reduce our fuel consumption, save money on labor and eliminate the risk of a backing incident with a loader. At this facility, the grinding was coming off from a discharge belt and we would have to move that material with a wheel loader back and forth several times. Near misses on the conveyor were regular occurrences, so if you put an EDGE 80-foot stacker in the process, it is much safer."

A 23-year veteran of working for Mecklenburg County Solid Waste, Hoffman and his colleague, Doyle Tyson, the county department's environmental supervisor, have obviously become big fans of EDGE products. Part of Tyson's role is the purchasing and maintenance of the equipment used at its waste-handling sites.

But they also have come to rely on and remain impressed with the continued good service and attention they get from Hills Machinery and its environmental sales representative, Frank Murphy. Hills has carved itself a prominent niche in the market by consistently offering outstanding equipment brands and timely service to folks across the two Carolinas.

"In Mecklenburg County, we have 70-75 pieces of equipment, and the EDGE products have performed as good, if not better, than anything else we have in use out there," Hoffman said. "Plus, the service from Hills Machinery has been great when we have needed it, but I will say we haven't needed it a lot due to their durable products.

"Of course, machines with moving parts do break and Hills has been fantastic in its response time and getting us any parts we need to get a machine up and running again."

Hills Machinery (and its environmental division) has eight locations across North and South Carolina, including branches in Charlotte, Raleigh, Greensboro, Asheville and Greenville in the Tarheel State. In the Palmetto State, Hills Machinery operates stores in Charleston, Columbia, and Greenville. The full-service equipment dealership's website can be found at www.hillsmachinery.com. CEG