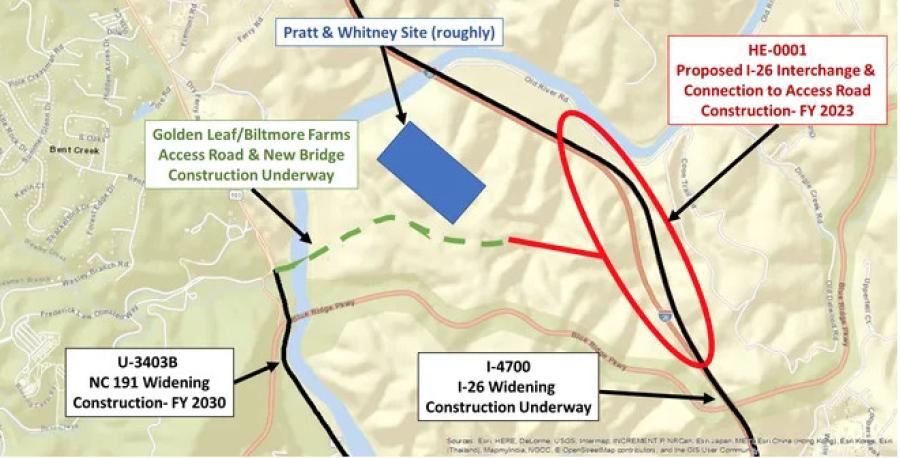 The North Carolina Department of Transportation has proposed a new interchange on Interstate 26 between Brevard Road and Long Shoals Road. The proposed area lies in the red oval at right. The interchange would serve the new Pratt & Whitney plant and provide all motorists will better access to Brevard Road, the DOT said. (NCDOT photo)

The new interchange is proposed to be built in Buncombe County on I-26 between Brevard Road at Exit 33 and Long Shoals Road at Exit 37, according to McCray Coates, division project manager of NCDOT's Asheville office. The interchange will connect to a road under construction for the Pratt & Whitney site, which also connects to a new bridge over the French Broad River.

The Asheville Citizen Times reported that NCDOT is still working to design the interchange, but when built, the crossing will serve the public as well as the new aircraft engine parts manufacturing plant.

"The key there is it will provide that direct access over to the [Pratt & Whitney] facility and over to NC Highway 191 [Brevard Road], so it definitely promotes connectivity throughout the area," he said.

A 1.2 million sq. ft. factory is now being built on Pratt & Whitney's 100-acre site in southern Buncombe County. The defense contractor said in June it plans to start production at the plant, which will manufacture high-tech airfoils that work inside civilian and military jet engines, in late 2022.

The parts maker also stated that its new western North Carolina facility will employ 800 people, with an average salary of $68,000, although that includes engineering and other white-collar positions. Most of the factory's jobs will be in production.

Due to Pratt & Whitney's timeline, NCDOT considers the freeway interchange to be a "time-critical job creation opportunity," project, according to Coates.

Asked by the Citizen Times if Pratt & Whitney is the primary driver for the interchange's construction at the proposed site, Coates responded, "It is an economic development project there. That is a big factor, and the connectivity will definitely be a benefit."

The estimated cost to build the I-26 interchange will be "up to $35 million," he said.

NCDOT hopes to advertise the I-26 interchange project for construction contracts in the fall of 2022, with some clearing of trees and undergrowth possibly starting that winter and into early 2023.

"We're anticipating somewhere around an 18-month time frame on the project," Coates said. "As we get further on [in the] design, we can be tighter on that number, but I think that's a good target right now."

"I firmly believe that our state's commitment to building the interchange is what pushed us across the finish line to win the project for North Carolina," Edwards said, noting that the Tarheel State had competed with another state to attract the manufacturer. "We knew of several economic and infrastructure hurdles we had to overcome to win the project.

"One of those hurdles was that Pratt & Whitney needed to be sure they could suitably move a large number of employees, vendors and deliveries on and off their site," he continued. "Since we expected to draw jobs from seven western counties, it would have been unproductive to add to employee commute times had we not addressed inevitable congestion issues. We were also concerned with adding congestion for our local traffic along I-26, which the current widening would otherwise eliminate."

New Interchange Was the Solution

Biltmore Farms LLC, which sold a 100-acre tract to Pratt & Whitney for $1, is developing the road to the facility and a bridge over the French Broad River to Brevard Road.

"We understand the potential of an interstate interchange was an important component to Pratt & Whitney's decision to locate in Buncombe County over other competing sites," Ben Teague, Biltmore Farms' vice president of strategic development, told the Citizen Times via email. "Pratt & Whitney is building a world class advanced manufacturing facility which will draw talent from many western North Carolina counties, in addition to Buncombe County."

Asked about the project, and if Pratt & Whitney, based in East Hartford, Conn., requested the interchange as part of its agreement to locate here, company spokesperson Heather Summerer provided a general statement to the Asheville newspaper.

In it, she noted the aerospace company's sizable investment in the factory and will "make commitments to the county and state regarding hiring and investing in the local community, colleges and schools to help make this partnership a success."

"The interchange is a very important part of the project," Summerer wrote in her email. "Access to the area will help Pratt & Whitney recruit from a broad and diverse pool of candidates from within the region."

"Sites and infrastructure are something we always struggle with in western North Carolina," Duncan remarked to the Citizen Times. "Those investments are necessary to attract the kind of jobs we aspire to have in the community."

He said that highway infrastructure serves a public purpose by helping with traffic congestion, but it also can attract more industry.

"It makes the next economic development, the next job creation project that commits to those acres all the easier, because we've invested in this infrastructure like we have in other industrial parks in the past 40 years in Buncombe County," Duncan noted.

Chris Joyell, director of healthy community at MountainTrue, the Asheville-based environmental advocacy nonprofit, told the Citizen Times that the interchange is "not a surprise." His organization realized it was part of an economic incentive package.

While an interchange certainly could have environmental impacts, Joyell said it was difficult to comment on until firm plans emerge, according to the Asheville news source.

He said his organization will wait to see which building options emerge as frontrunners.

Between the ongoing widening of an 18-mi. stretch of I-26 between the Brevard Road interchange in Buncombe County and Four Seasons Boulevard in Henderson County, and the upcoming I-26 Connector project, Joyell is concerned about I-26 becoming home to ever-burgeoning traffic counts.

N.C. State Sen. Edwards has previously worked to secure $30 million in additional funding for the new I-26 interchange. It is currently in a bill making its way through the General Assembly.

"We are awaiting approval from the Federal Highway Administration [FHA] for authorization to move forward with the interchange," Edwards replied to the Citizen Times via email. "NCDOT had to submit to FHA seven plans ranging in size and scope."

NCDOT also is pursuing federal grant monies, particularly those from the Rebuilding American Infrastructure with Sustainability and Equity (RAISE) program. In addition, NCDOT will look to the Appalachian Regional Commission and the U.S. Economic Development Administration, Coates said.

If NCDOT successfully secures federal money, it would defray the amount needed from the state, he added. Currently, $10 million in state economic development funding, Coates said, has "been committed from the highest levels of the NCDOT to the project."

If passed by the state House, Edwards' proposal would need Gov. Roy Cooper's signature to finalize it.