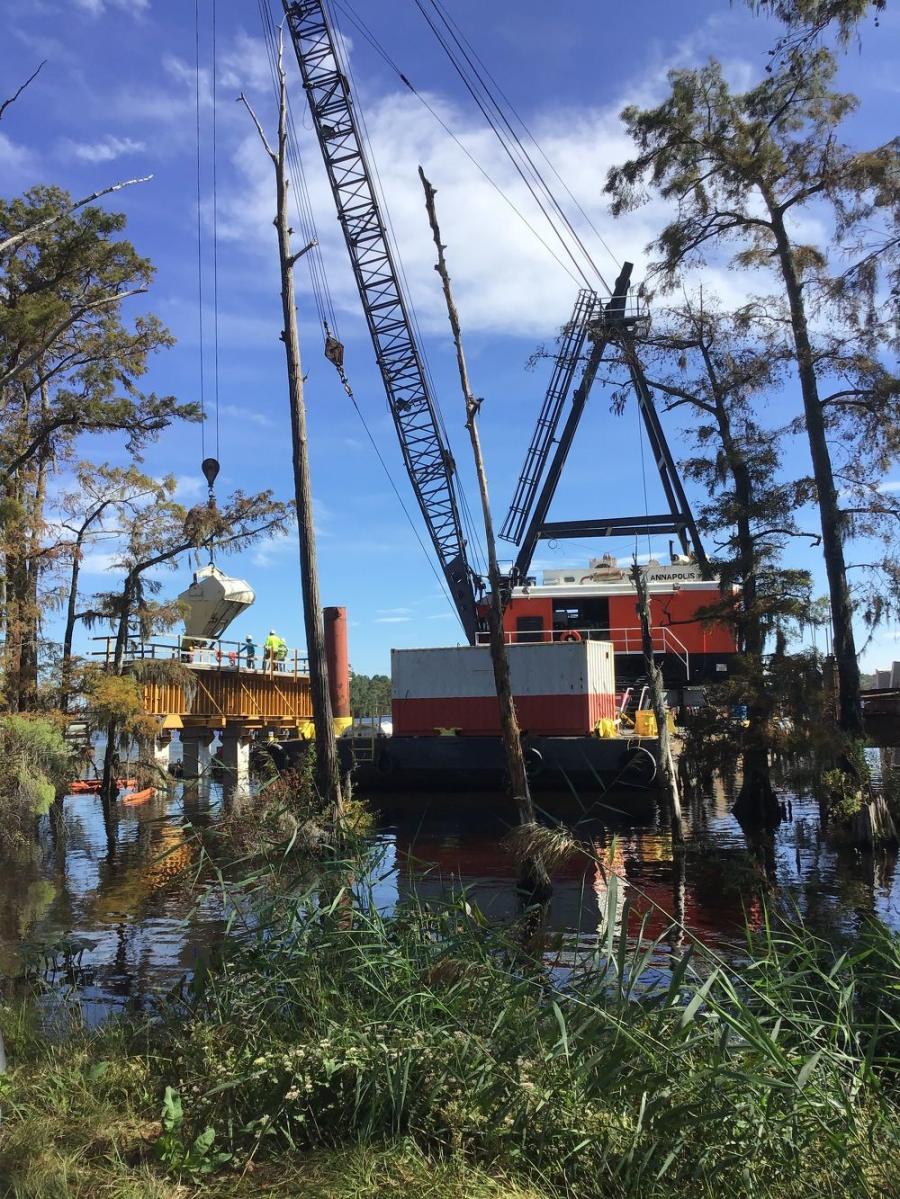 Construction crews in North Carolina are replacing the Perquimans River Bridge in Perquimans County. The work is part of a $57 million project that will improve U.S. Highway 17 Business/N.C. Highway 37 between Hertford and Winfall. (NCDOT photo)

Construction crews in North Carolina are replacing the Perquimans River Bridge in Perquimans County. The work is part of a $57 million project that will improve U.S. Highway 17 Business/N.C. Highway 37 between Hertford and Winfall.

"The aging swing span bridge over the Perquimans River has become structurally obsolete," said David B. Otts, district engineer of the North Carolina Department of Transportation (NCDOT). "Although still safe to traverse, the high costs of maintaining a 91-year-old structure make it financially prudent to replace it with a new, low maintenance bridge. 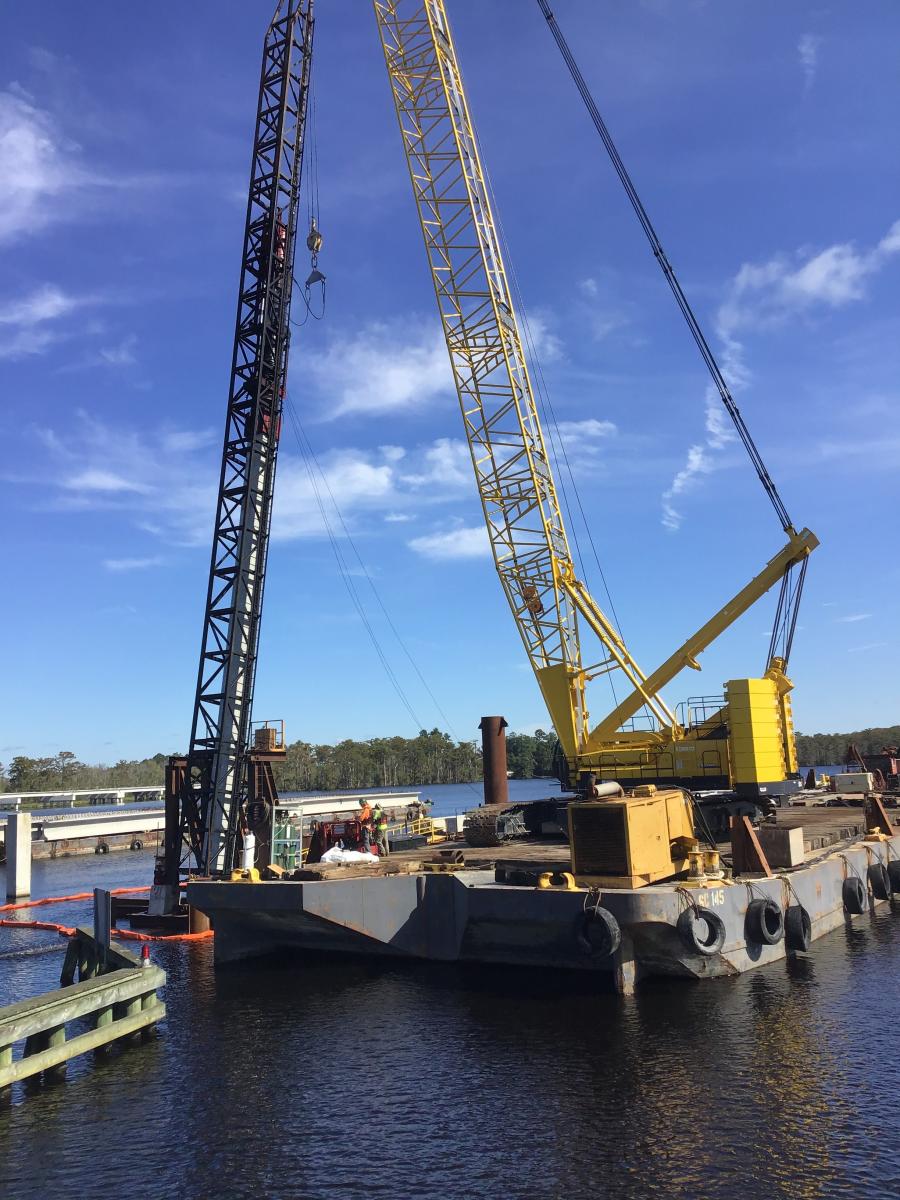 "The adjacent causeway connecting Hertford to Winfall has its share of geotechnical issues, which can cause rapid settlement forcing periodic road closures. This section of roadway is now being bridged to ensure a dependable link between neighboring towns. In Winfall, the intersection of NC 37 and U.S. 17 Business will be realigned to allow the higher AADT primary route [NC 37 at 3800 vs. U.S. 17 Business at 2600] to flow straight through without stopping."

The current structure, known as the "S-Bridge," is nearly 650 ft. long, while the replacement will be 2,700 ft. long. The existing bridge is narrow, with two 10-ft. travel lanes. The new structure will have 12-ft. travel lanes with a 4-ft. paved shoulder each side. A 5.5-ft.-wide sidewalk also will be incorporated on the northeast side.

Work began in mid-2019, and is scheduled to be completed in December 2021. For now, area motorists are doing their best to deal with the construction.

"We require periodic lane closures, mainly to facilitate material deliveries," said Otts. "These closures cannot be in place between the hours of 7:00 a.m. to 9:00 a.m., and 4:00 p.m. to 6:00 p.m. Additionally, phasing will require a full shutdown of the bridge for approximately eight months. It should be noted that the contractor's design drastically reduced this time, as it was initially anticipated the bridge would be closed for two years. The detour will be approximately 4 mi. in length."

The project is a state-funded design build contract awarded to McLean Contracting Company of Baltimore, Md.

"McLean is a mid-Atlantic based heavy civil contractor founded in 1903," said Otts. "McLean has a good track record and strong relationship working with NCDOT, and has demonstrated its ability to complete a project of this nature numerous times throughout the region. McLean has a knowledgeable workforce, many of whom are based in close proximity to the project in northeast North Carolina and southeast Virginia."

According to Tom Bettcher, McLean Contracting superintendent, one of the main challenges on the project involves access for floating equipment.

"Two factors which were greatly scrutinized at the beginning of the project and played a major decision in the planning process was the limitation of barge sizes, due to the channel width of the downstream Catfish Hunter U.S. 17 bridge and the water depths," said Bettcher.

In order to perform a project of this magnitude, cranes with up to 300 tons of capacity are required. Construction of a bridge over water typically requires the installation of trestle, which is expensive, or the use of barge mounted cranes.

"While McLean Contracting has manufactured and owns several cranes capable of making the heaviest lifts which are permanently fixed to barges, the barges are too wide to access the project because of the downstream bridge," he said. "Because of this, McLean is utilizing crawler cranes sitting on barges. Before placing and using these cranes, the barges needed to be analyzed for the weight of the cranes and for stability while making heavy lifts." 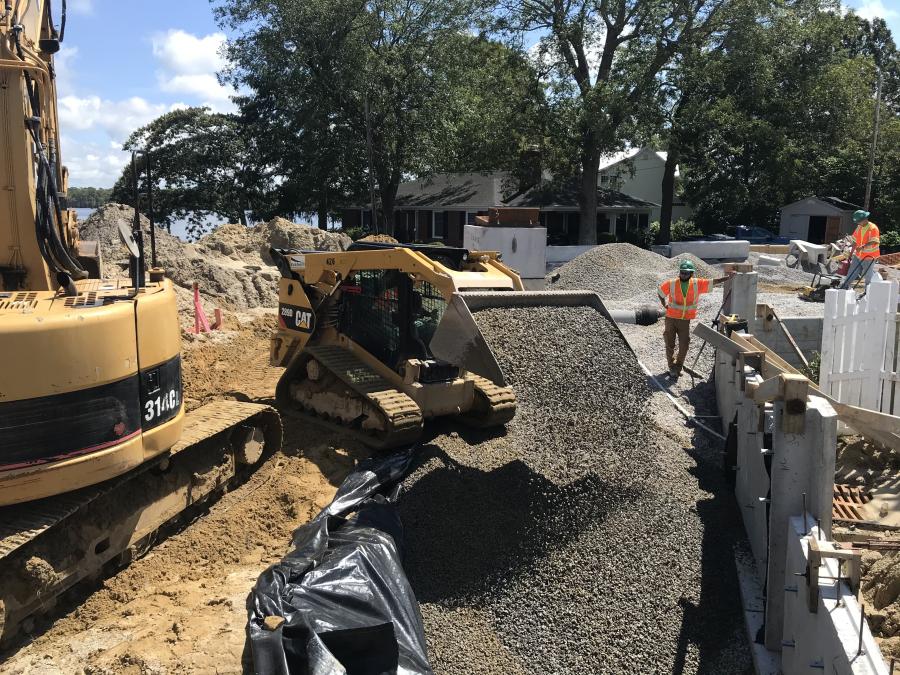 The water depths in some areas of the project are relatively shallow, which prevents these areas from being accessed by a barge-mounted crane.

"In these areas trestle was installed; the crawler cranes walk off the barge onto the trestle to access the work. In one area located in jurisdictional wetlands, McLean Contracting worked with various regulatory agencies to get approval to install a temporary stone causeway for access to the work," said Bettcher.

Delivery of concrete and other components of the bridge also has been a concern.

"In order to get concrete to various locations where it was not possible to use conventional methods, such as pump trucks or concrete buckets, Mclean is utilizing concrete buckets placed on a barge and then pushed by tug buckets to the discharge location," said Bettcher. "In order to get the concrete to the barge, a trestle has been installed on a nearby property, which McLean is utilizing as a laydown yard. This same trestle will be used for the structural steel and various mechanical components for the swing span."

Bettcher noted that replacing the Perquimans River Bridge is no small task.

"The existing bridge and roadway consists of a much shorter swing span bridge and causeway. In addition to issues with the bridge due to age, the causeway also has required significant maintenance work over the years, due to its location. The new structure will be a much longer bridge, eliminating the causeway. The fixed bridge will consist of 30-inch pre-stressed concrete piles; cast-in-place pile caps; Florida I-Beam girders; 4-inch-thick precast deck panels; and a 5-inch-thick cast-in-place riding service.

"The swing span also will be supported by 30-inch piles and have cast-in-place piles caps. A steel structure will be assembled to mimic the looks of the existing historic bridge and a light-weight concrete riding service will be cast. The movable bridge will incorporate a state-of-the-art operator's house located on the south approach to the bridge. The bridge will be protected from marine traffic by a fender system consisting of fiberglass piles, composite lumber and fiberglass handrails."

Bettcher explained that bridge construction is inherently one of the more dangerous aspects of civil construction, making the safety of McLean's employees and employees of the trade contractors the top concern. In addition, native species of aquatic life are protected by an in-stream moratorium, which extends from mid-February through the end of June each year. 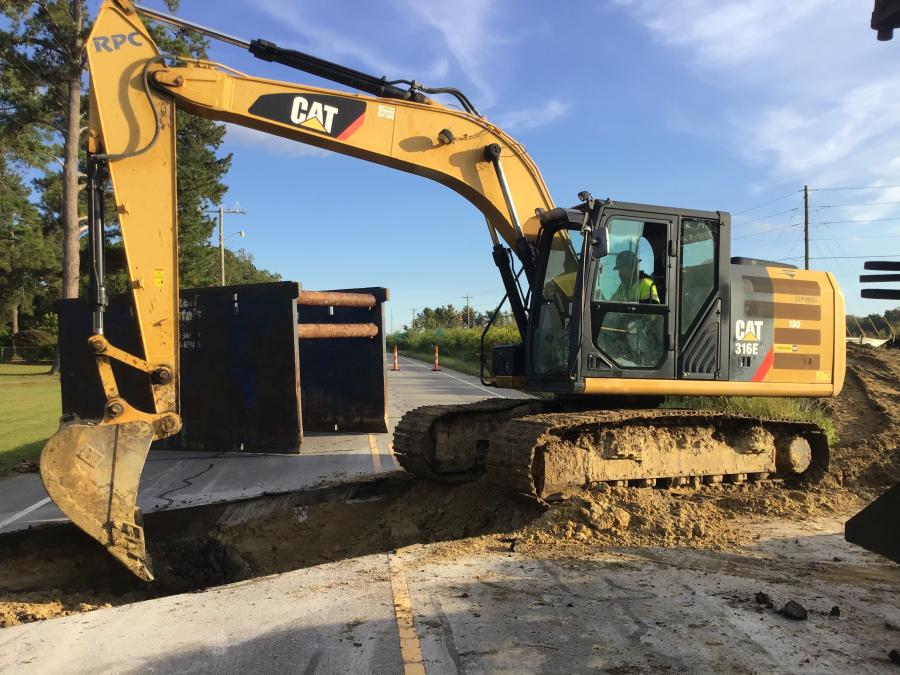 Regarding road improvements, both the north and south approaches involve some realignment from the existing conditions. Approaches on each end will be supported by MSE walls up to the abutments. On the Winfall side of the bridge (north approach), a newly-designed traffic pattern will allow for continuous traffic to flow onto and off of NC-37. Along with the new roadways, drainage improvements and utility improvements are being made.

Construction began onsite in July 2019 with a test pile program. That was followed by the installation of a new sheet pile bulkhead with cast-in-place concrete cap on the south approach. After receiving approval of the various submittals and permits, pile driving commenced with 172 of the total of 185 piles driven. A total of 23 of 25 of the pile caps for the fixed bridge have been completed. One of two rest pier pile caps has been completed.

Precast FIB girders have been erected in 19 of 27 spans, while deck panels have been placed in seven of 27 spans. Four spans of cast-in-place bridge deck concrete have been placed. The operator's house structure (piles, concrete floors and walls) has been completed. Much of the south approach fill has been placed, and the MSE walls on that approach are constructed.

Work has been ongoing for the second rest pier pile cap, as is bridge deck construction with the placement of FIB girders, deck panels and CIP deck slabs. Fabrication of the swing span structural steel and machinery is taking place offsite. Roadwork for the realignment of the Winfall Boulevard/Creek Drive intersection is continuing. Buildout of the operator's house continues, including installation of the roof exterior siding and interior framing.

In January 2021, all of the substructure, with the exceptions of the last two bents and second abutment, were completed. The assembly of the swing span began and the fender system will be installed in spring 2021. The roadway work related to the realignment of Winfall Boulevard and Creek Drive also will be completed. 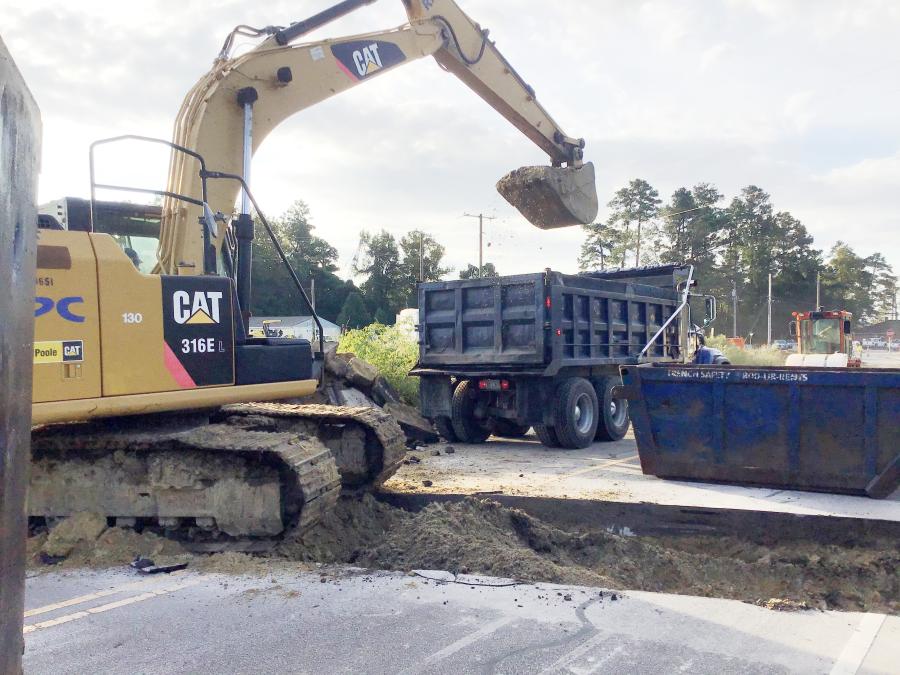 Although there are many weather events which could have an effect on the project, the greatest threat likely comes from hurricanes. The project is located in an area of North Carolina which has been hard hit by multiple hurricanes in the past.

The project is a design-build job administered by NCDOT. Prior to bidding, the design-build team submitted their qualifications to NCDOT to be approved for bidding. A technical proposal phase occurred during which the numerous teams prepared proposals and presented them to NCDOT. After being chosen, the design build team completed design of the project, initiated the process for acquiring permits and started right-of-way acquisitions. In addition, the general contractor began material acquisitions.

"Moveable bridges are rare, so the opportunity to oversee construction is exciting," said Otts. "Additionally, the project team takes pride in knowing we are providing a dependable link between Hertford and Winfall that will also be seen as a landmark throughout the state." CEG