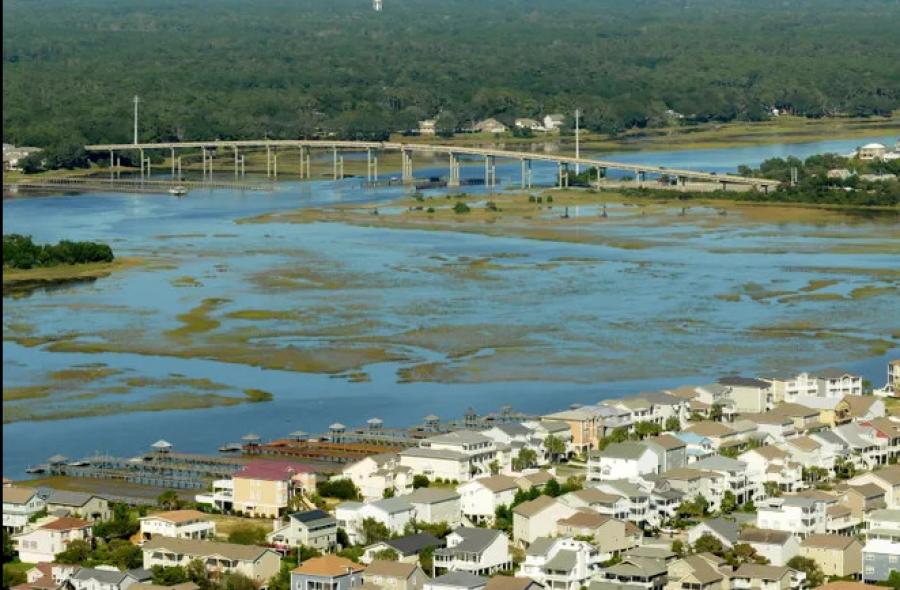 In the two days before Christmas, the North Carolina Department of Transportation (NCDOT) played Santa Claus by presenting Tarheel drivers and out-of-state motorists with several upcoming road improvement projects statewide as well as an upgrade to a coastal bridge.

Brunswick County Span to Be Preserved

At Ocean Isle Beach, a decades-old bridge will get improvements to lengthen its lifespan after the NCDOT awarded a contract earlier in December. Work to preserve the 36-year-old bridge on Causeway Drive (N.C. Highway 904) over the Intracoastal Waterway is set to begin in mid-March.

Repairs, which include resurfacing, concrete repair and installation of a taller pedestrian and bicycle safety railing, will keep it in good condition for the next 35 years.

The contractor, Freyssinet Inc., of Sterling, Va., won the project bid for $2.8 million. Crews may reduce the bridge down to one lane on weekdays during the spring, fall and winter.

Construction is expected to be complete by May 2022.

Due to a new contract awarded by the NCDOT, nearly 21 mi. of area roadway will be resurfaced near the state's capital city.

Under a $3.94 million contract, Fred Smith Company of Raleigh will mill and resurface pavement and improve shoulders on 46 sections of state-maintained roads in western Wake County.

This work can start as soon as March 15 and must be complete by the end of July 2022.

Charlotte-Area Roads to Be Upgraded

A $3 million contract awarded by the NCDOT will bring improvements to several primary and secondary roads in Charlotte and Mecklenburg County.

The contract includes milling, resurfacing, and shoulder reconstruction of 14.9 mi. throughout the county, including sections of these primary roads: N.C. 16 (Providence Road) between Queens Road and Ferncliff Drive; N.C. 24/27 (Albemarle Road) between Interstate 485 and Cabarrus Road; and U.S. 21 (Statesville Road) between Sunset Road and Lakeview Road.

More than 100 mi. of southeastern Tarheel highways and roads will be improved after the transportation agency awarded four contracts to two companies. The work for all four projects can begin as early as mid-March and includes milling, resurfacing and grading the shoulders on sections of highways and secondary roads in Pender and Sampson counties.

In Pender County, a pair of contracts were awarded to S.T. Wooten Corp., of Wilson, to improve more than 57 mi. of roadway. The first is worth $2.6 million and will upgrade a section of U.S. 17, N.C. 210, three sections of N.C. 53 and three secondary roads. Under another agreement, valued at $3 million, S.T. Wooten will focus on improving parts of N.C. 210, N.C. 53, and seven sections of secondary roads.

Both contracts are expected to be complete in the spring of 2022. The other two contracts were awarded to improve about 40 mi. of Sampson County roads. One, worth $2.3 million, was awarded to Rocky Mount-based Barnhill Contracting Co. and will tackle 18 secondary roads throughout the county that need fixes. The other contact, awarded to S.T. Wooten, will improve a section of N.C. 50 and 17 sections of secondary roads, totaling more than 29 mi. That agreement has a value of $3.5 million. The Sampson County upgrades are expected to be complete in June 2022.