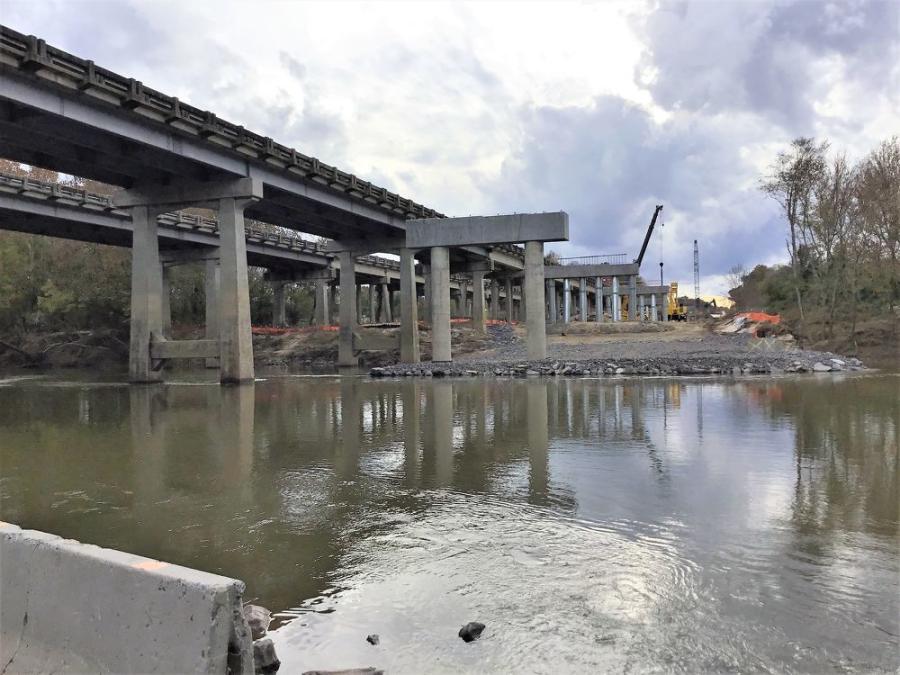 The North Carolina Department of Transportation is replacing an aging pair of bridges over the Yadkin River in the west-central part of the state.

A pair of aging interstate bridges over the Yadkin River are the centerpieces of a $72 million road improvement and replacement project now under way in a gorgeous part of west-central North Carolina.

The two bridges carry traffic east and west along I-40 between Clemmons and Bermuda Run, two fast-growing suburban communities southwest of Winston-Salem. The river forms the dividing line between the two towns and their respective counties, Forsyth and Davie.

One half of the 3.3-mi. project stretches from a half-mile east of the intersection of I-40 and Harper Road in Clemmons, then west across the historic river, best remembered as the waterway used by mountain man Daniel Boone in the mid-1700s. Boone spent his early adult years living just a few miles north of where crews are today working on the road/bridge project. 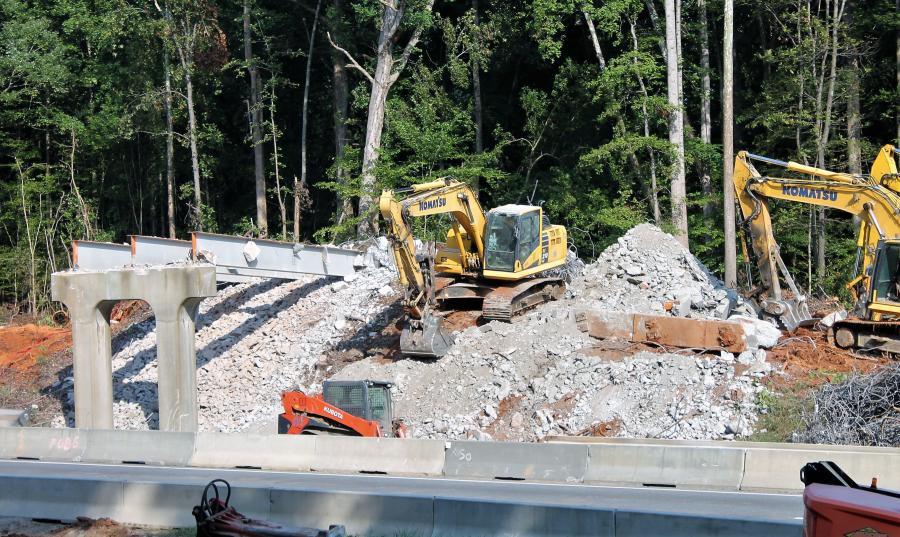 From the river crossing, the work continues southwest and up a slight grade to the next interstate exit at NC Highway 801 in Bermuda Run. Work finally ends about a mile west of that point.

Due to the influx of new suburbanites in western Forsyth County and eastern Davie County over the past 25 years, traffic moving through the area has become more congested on Interstate 40.

Davie also has become one of the state's top locations for new industry, including the massive Ashley Furniture manufacturing and distribution plant just a couple miles south of the interstate.

Time for Something New

But as more people and goods move across the Yadkin River crossing, more lanes in each direction are needed and the twin bridges have inched closer to the end of their working lives. 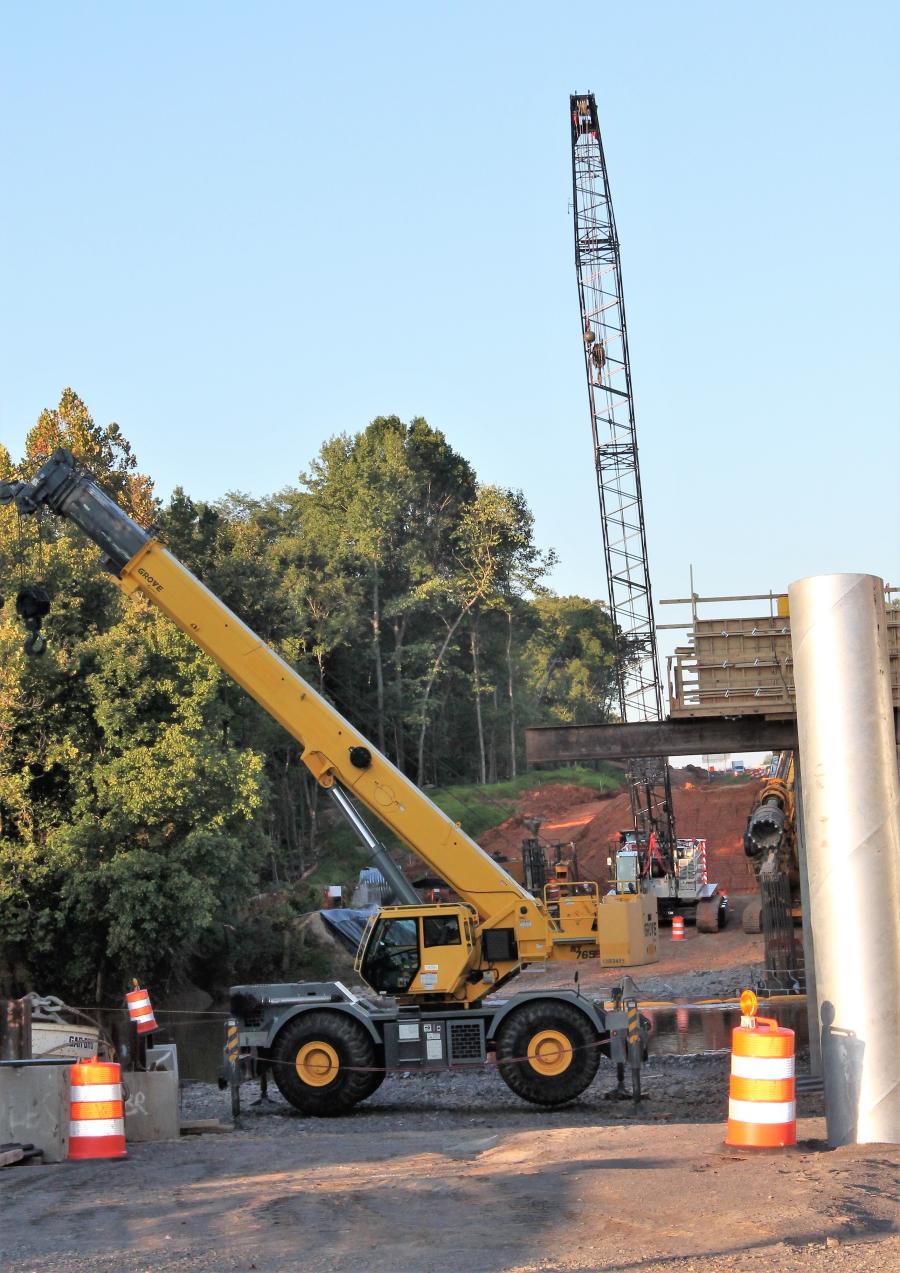 That is not to say that the spans pose an imminent danger to motorists, said Jordan Scott, a resident engineer with the North Carolina DOT. Rather, in the summer of 2017, the state began a proactive, step-by-step process to replace the structures and expand the roadway while also maintaining vehicle traffic through the corridor.

"The new bridge is really the driving force behind this whole project," said Scott, who helps oversee the work from the NCDOT's Division 9 offices in Winston-Salem. "The new single structure will be an eight-span bridge that is 120 feet wide and 1,100 feet long."

The bridge plans call for three lanes in each direction of I-40, as well as wider inside and outside shoulders and a concrete median barrier.

"We will also build median barriers throughout the entire length of the project," Scott said.

The upgrade will replace two narrow lanes and shoulders along the current roadway that becomes even more constricted on the old bridges, built decades ago with no shoulders at all.

When work is completed in November 2020, I-40 will then comprise six lanes from just east of Winston-Salem to the project end west of Bermuda Run. At that point, the highway once again becomes two lanes in a largely pastoral part of Davie County.

The I-40/Yadkin River bridge project is being performed as a joint venture between Flatiron Constructors and Blythe Development Co. The two companies also are reshaping Business 40 through downtown Winston-Salem, just a few miles to the east.

Since last fall, most of the clearing, earthmoving and bridge support installation has been along the north side of westbound I-40. 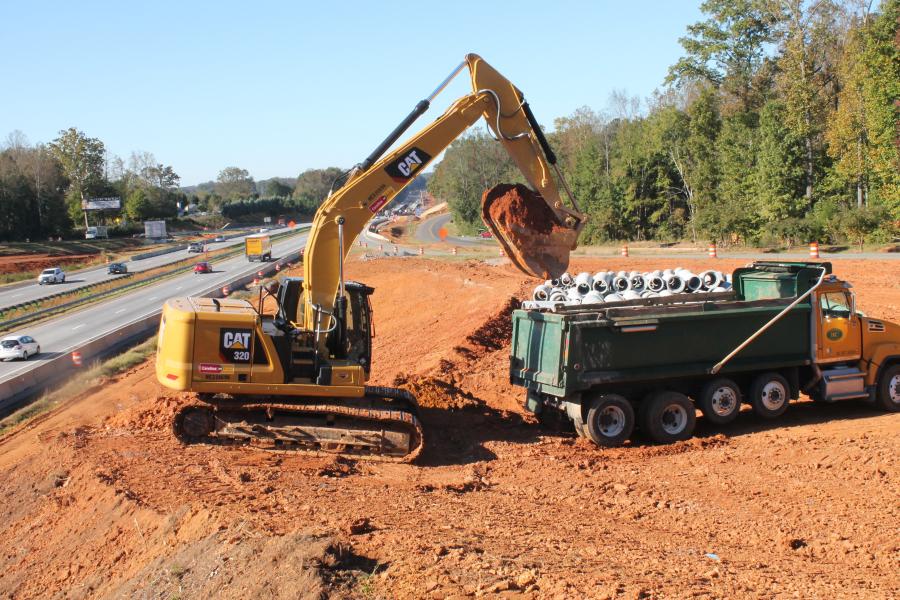 "We are incorporating the phasing of the work while maintaining the flow of traffic on this busy stretch of highway, and that means we need to build around the traffic," Scott explained. "If you can envision it, the work we are doing now on the north side of westbound I-40 is being done to anticipate a shifting of traffic from Harper Road to the first part of the new river bridge, then we will work in the median on that section of the bridge, before shifting the eastbound traffic to the median and work our way southwest past NC 801."

He added that any lane closures and detours will be in force during the nighttime hours, but the contractors will maintain the existing flow of traffic during the day. Drivers can expect some median crossovers, but daytime traffic patterns will be along the shifts.

"We are working to get ready for that first-phase shift onto the new structure and getting the roadway facilities caught up," Scott said Nov. 2. "There is some paving and milling happening now. We are also trying to take advantage of the moderate temperatures, because we are pushing to get that shift onto the new bridge around the first of the year. That's our next big milestone."

Blame It on Rain

The temperatures may be ideal for the project, but wet weather in August, September and October, sometimes severe, has impeded the pace of the work, Scott admitted. Indeed, the remnants of Hurricanes Florence and Michael each moved through the I-40/Yadkin River bridge work site, resulting in thick mud and flooding. 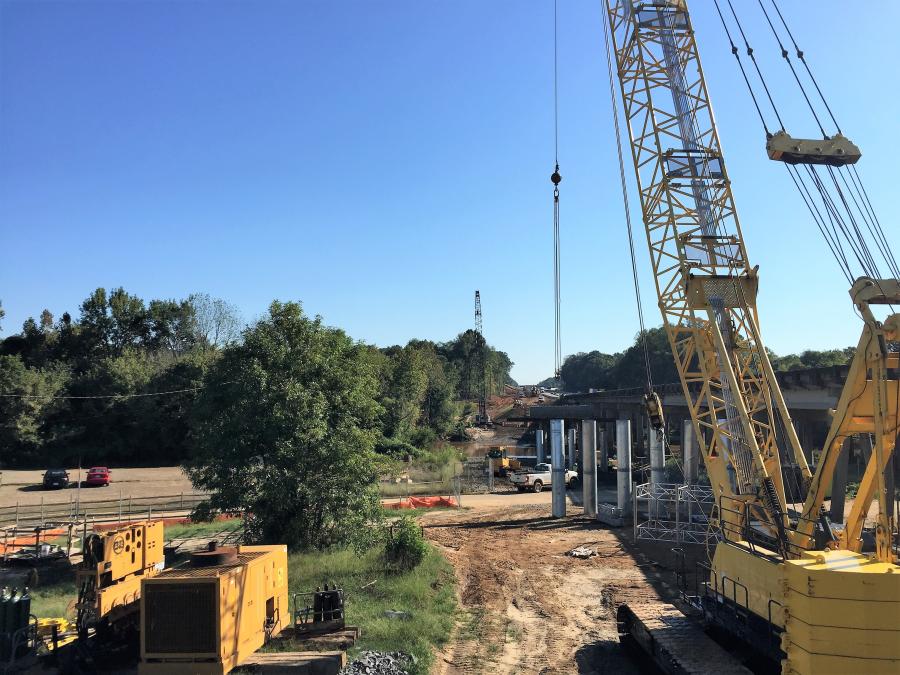 "That has really killed us this year," Scott said. "We had a very wet August, which, as you know, is a prime time for grading and earthwork operations. Then we were dealing with two hurricane events and we lost several weeks just because of them. The mud will just get dried out from one storm before it rains again."

The bridge work passes directly over an access road that leads to the popular BB&T Soccer Park, a large set of fields along the Yadkin. Beside one of the fields closest to the river is the equipment yard and staging area for the road/bridge project. In anticipation of the hurricanes, some of the machines were secured there, but the unexpectedly high flooding that crested down the river from the west still took a toll.

"We just didn't get them high enough as the river overflowed its banks, and we lost a few small pieces, such as light plants," Scott explained. "It was 10 to 12 feet deep in some spots, and the Yadkin stayed outside its banks for almost a week, so there wasn't a lot you could do on the structure. The cleanup took us several days."

Work Goes Back on Track

Despite the weather, much has been accomplished in 2018 and, according to the NCDOT progress report, the work is ahead of its predicted pace, with clearing and grading nearly complete along the north side of westbound I-40. 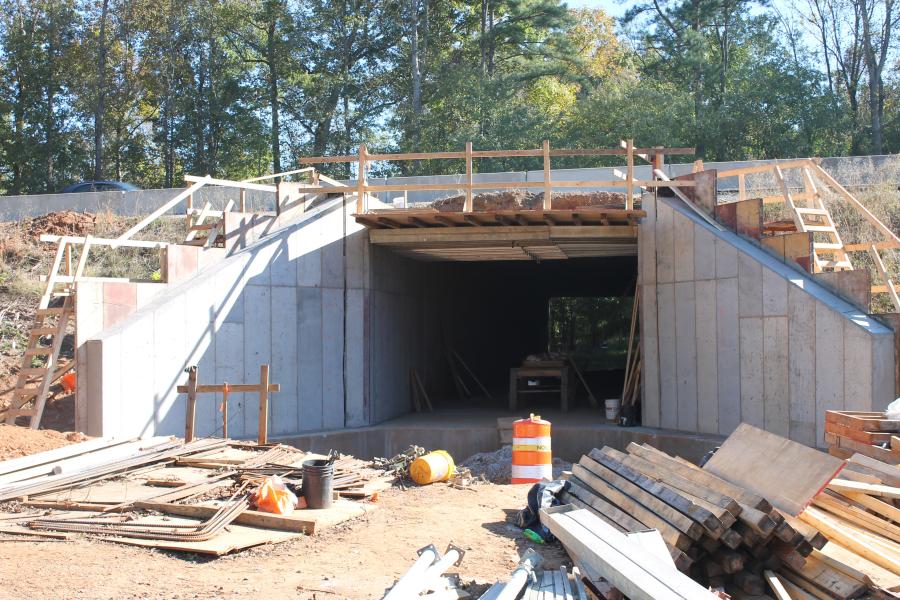 "We hope to switch over and begin work on the roadway along the south side of the interstate [the eastbound lanes] as early as next spring," Scott said. "The clearing so far on the eastbound side is for the drainage installation."

To keep the process moving along, Flatiron and Blythe have multiple crews on site day and night, with dozens of people working during the day, according to Scott.

The interstate cuts right through what was once a large and beautiful country estate overlooking the Yadkin. Winmock, a striking red-roofed barn on the old family farm, has been turned into a meeting and events center on the south side of the highway high above the river.

On the other side of the roadway is the Kinderton residential neighborhood, the soccer park and other planned developments.

The state built a narrow bridge over the interstate decades ago, so the estate's owners could get from one side of the farm to the other. After the property was sold for development, the one-lane bridge was demolished in August, to be replaced with an arched-truss pedestrian bridge designed to be aesthetically pleasing and connect a future greenway to Winmock.

Scott expects the new structure to be erected by the end of 2019.

In addition, an old tunnel under I-40, which was built as a cattle crossing, is being expanded and reinforced to accommodate the highway widening, Scott explained. Like the new pedestrian bridge, it will be used as a link between the Kinderton neighborhood and the Kinderton business park adjacent to Winmock.