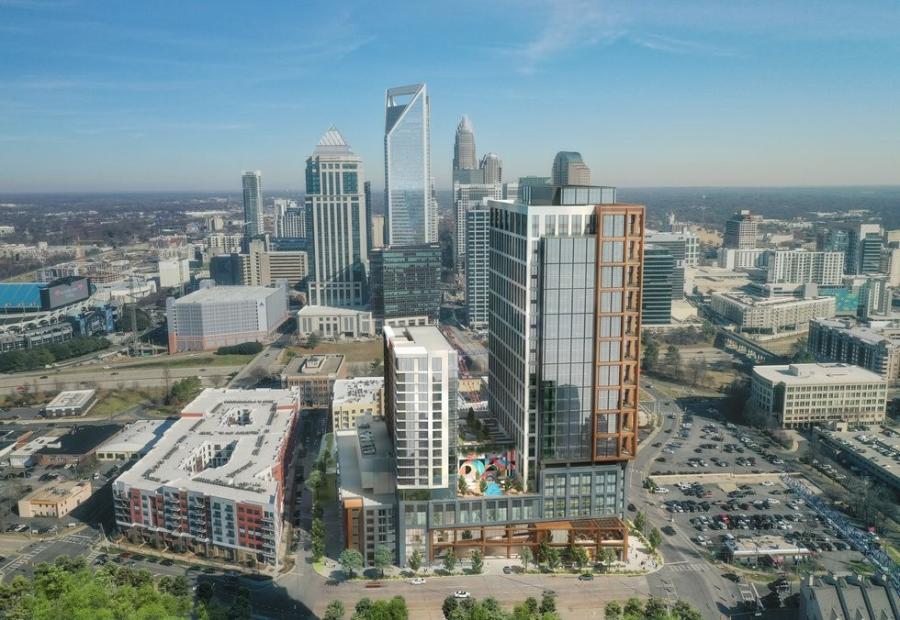 Carson South End will be located at 1102 South Tryon Street at the intersection of Carson Boulevard and will be positioned between South End and Uptown’s Central Business District. (Crescent Communities rendering)

One of Charlotte, N.C.'s leading developers said Feb. 22 that it is planning another tower in the city's South End: A 31-story, $600 million building closer to the edge of uptown.

It is just one of many projects planned for the ever-growing neighborhood divided from the city's central business district by Interstate 277 (John Belk Freeway).

The Charlotte Observer reported that Crescent Communities and Nuveen Real Estate, each working in the Queen City, will develop Carson South End at 1102 South Tryon St. at its intersection with Carson Boulevard.

Sagar Rathie, managing director of office at Crescent, told the Observer that construction is expected to start as early as the end of this year at the three-acre site, and should be completed by 2025.

The proposed office building will, in fact, only be 21 stories tall, Rathie said, because it will sit atop a 10-story parking deck. The hotel will be shorter than the office building but also will be built above the parking deck. Crescent is expecting to have approximately 1,300 parking spaces on site.

An elevated terrace between the office and hotel buildings will afford views of uptown and South End, Rathie noted.

The Carson South End apartments are designed to sit beside the hotel and office.

Crescent was intentional about not developing this project in the heart of South End, according to Rathie. Rather, he told the Observer that the development company wanted to pull the energy and excitement from South End and connect it with the business district in Uptown Charlotte.

"We saw this as the best of both worlds," he explained.

Rathie envisions Carson Boulevard as the next "beating heart" of Charlotte. The tower will be close to the LYNX Blue Line's Carson station, meaning people living and working in the development can easily access the train to get around town. At the same time, Carson South End is just a few blocks from I-277.

The Crescent projects are the latest in a flurry of tower developments planned in Charlotte's South End, including three major projects just steps away from Carson South End:

The Charlotte newspaper reported in early February that a pair of 24-story towers, one for offices, the other for apartments, are slated to be built along South Boulevard by a joint venture of three companies.

White Point Partners teamed up with Barings, the global an investment management firm, both with offices in Charlotte, to close on 1.2 acres at 1728 South Blvd., near East Boulevard, in late December with plans to start construction early next year.

The two firms have formed a joint venture with MRP Realty, a company with branches in several cities, including New York and Washington, D.C., the Observer noted

The two buildings will include 400,000 sq. ft. of office space, ground-floor retail and other amenities, including a rooftop terrace.

A Walgreens pharmacy currently operates at the site, but will close, and the building will then be demolished as part of the development, explained Laura Graff, a spokesperson of White Point.

"This acquisition enables the complete transformation of this block into a true live-work-play destination," noted Jay Levell, co-founder of White Point, in a news release.

Construction is expected to start early next year, Graff told the Observer.

To build the 24-story apartment building next door, White Point is partnering with the Charlotte office of Greystar, the global property management firm. That tower will include 324 apartments and about 15,000 sq. ft. of ground-floor retail.

Its groundbreaking was held shortly after the new year, and the developers expect construction to be wrapped up in 2024.

Both White Point projects are steps away from the LYNX Blue Line commuter train station.

"This first-class office development will be a dramatic complement to an underutilized block in the most high-profile intersection in South End," said MRP Realty's Patrick Sullivan, according to a news release from his firm.