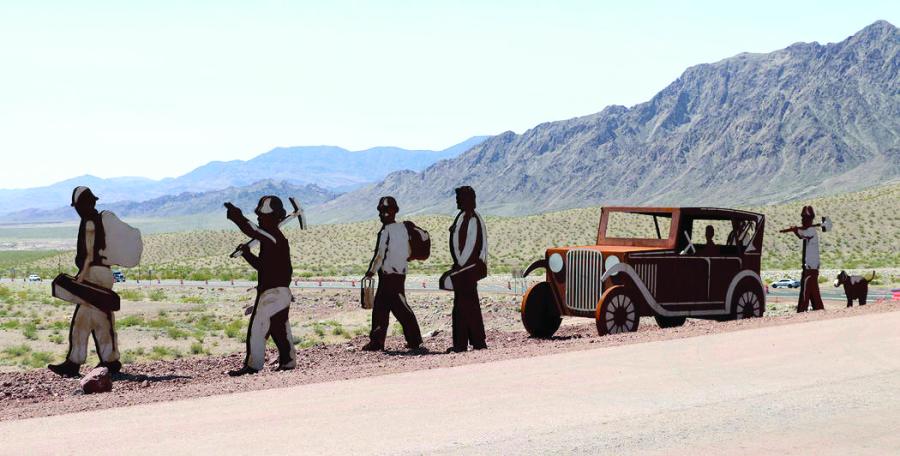 The $318 million construction project, funded by federal, state and local governments, is being overseen by the Nevada Department of Transportation and the Regional Transportation Commission of Southern Nevada.

LAS VEGAS (AP) A collection of sculptures depicting the construction of Hoover Dam. A glimpse of Lake Mead. A crossing bridge for bighorn sheep and wildlife.

The country's newest interstate that ultimately will connect Las Vegas and Phoenix is meant to cut down on travel time. It also will be a visual treat for motorists in the first section in southern Nevada.

“Your eyes will see new scenes, new colors and new textures from beginning to end,” said Cary Baird, a landscape architect who worked on the project.

A couple miles of the interstate in Henderson have been open for months. The remaining part of a 15-mi. stretch opened to the public Aug. 9 and will bypass Boulder City.

The $318 million construction project, funded by federal, state and local governments, is being overseen by the Nevada Department of Transportation and the Regional Transportation Commission of Southern Nevada. Construction began in 2015, requiring parts of the Eldorado Mountains to be blasted with dynamite to create the route.

The visual elements along the roadway largely were done by two companies, Stantec and Design Workshop, the Las Vegas Review-Journal reported.

Stantec placed sculptures of a Model T car and construction workers carrying tools and other supplies. Motorists will see some of the art along a concrete bridge light up at night. Native plants and vegetation adorn the sides of the road.

The Nevada Department of Transportation's section has a 1,200-ft.-long retaining wall with steel figures and objects that tell the history of Hoover Dam, built in the 1930s to create Lake Mead on the Nevada-Arizona border. Department spokesman Tony Illia said the textured, multi-colored art is coated with an anti-graffiti film.

Funding for landscaping and aesthetics is included in the budget for construction projects, he said.

“These structures can help forge a sense of inclusion, making an emotional connection for visitors and locals alike,” he said.

The Arizona Department of Transportation is conducting an environmental study for the 280-mi. (451-km) corridor between Nogales and Wickenburg to determine where the proposed Interstate 11 could run.

ADOT officials said the department also is investing $134 million toward State Route 189 at Arizona's southern border, which is another segment of highway that would be designated for the future Interstate 11.