The Mississippi Arts and Entertainment Experience (MAEE) was designed to educate and inspire visitors, while also generating billions of dollars for the Mississippi economy. 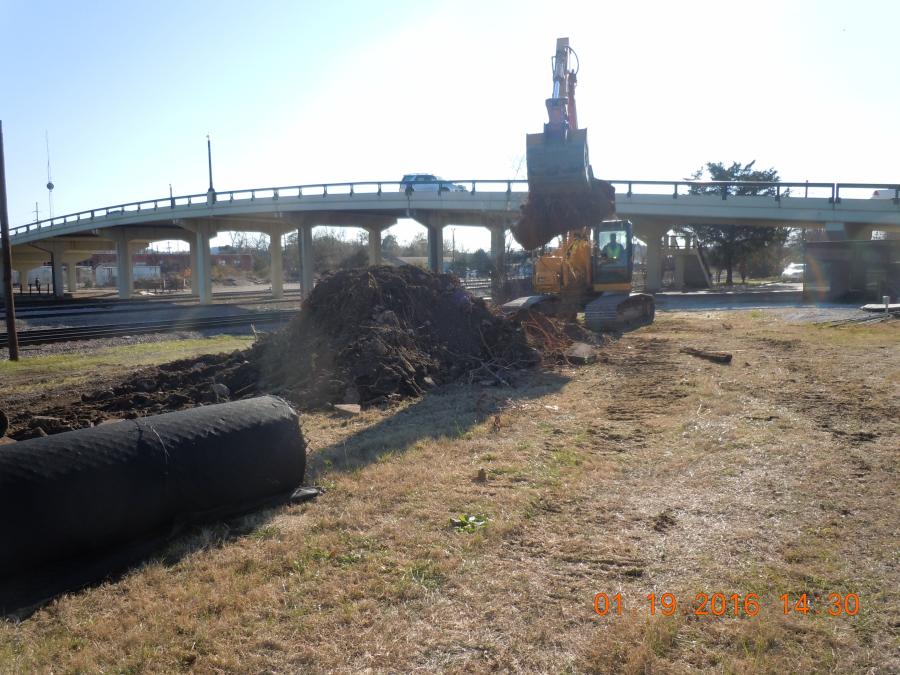 Yates Construction photo Scheduled to open in conjunction with the state’s bicentennial, the Mississippi Arts and Entertainment Experience (MAEE) was designed to educate and inspire visitors, while also generating billions of dollars for the Mississippi economy.

Scheduled to open in conjunction with the state's bicentennial, the Mississippi Arts and Entertainment Experience (MAEE) was designed to educate and inspire visitors, while also generating billions of dollars for the Mississippi economy. Construction on the $45 million structure began the first week of January, and is expected to be completed by November 2017.

“Located just off I-20 and close to I-59, the state-of-the-art MAEE will be housed in an iconic structure totaling 58,500 square feet of space, including 20,000 square feet of exhibition space,” said Marty Gamblin, MAEE executive director. “Other elements of the building are a gift shop, a broadcast studio, an art studio, a multi-purpose space for traveling exhibits, a state-sanctioned arts & entertainment hall of fame, a Hollywood-style walk of fame, and an outdoor performance area and courtyard for impromptu performances by school groups, church groups and other organizations or individuals visiting the MAEE.”

Located in the city of Meridian on Front Street, MAEE will highlight Mississippi artists in every arts category. Years in the making, the project is about much more than music, based on the mission statement outlined in the Mississippi senate legislation.

“MAEE is dedicated to celebrating the essence of Mississippi's statewide legacy in the arts by recognizing and honoring Mississippi artists in all disciplines, including dance, drama, literature, music and the visual arts,” said Gamblin. “While musicians have an easier way to reach the public via recordings, radio, TV and now social media, many are known and their backgrounds are well documented.  However, the other arts, with the exception of actors, don't have that same method to reach the masses.  We would be missing an enormous part of the Mississippi arts and entertainment story to merely include music.”

According to Gamblin, a visit to the MAEE is going to be a world-class experience.

“Also, we didn't want the visitor to be confused with the music venues and other attractions in the state, and even in Meridian, that were centers for performances or medical centers.”

Exhibits will be organized around the themes of land, home, community, church and people. Audio and video stories will explore how Mississippians influenced the arts internationally. In addition, a Walk of Fame presented in 2009 will be transported from the MSU Riley Center to the MAEE site. New Walk of Fame stars will join current celebrities that include Jimmie Rodgers, B. B. King, Marty Stuart and Walter Anderson.

Turnout for the museum is expected to be extremely high, once the final nail is hammered and the last coat of paint is applied.

“With more than 13 million people passing on I-20, which is less than a mile from the MAEE site, the feasibility study conducted by Owens & Associates of Herndon, Virginia predicted a low number of 125,000 annually and a high end of 200,000 annually,” said Gamblin, who said the building will serve as a hub for other attractions throughout the state.

“We plan to offer a sample of what the state of Mississippi has to offer, in terms of arts and entertainment facilities and activities.  Our message to the visitor will be that if you like what you've seen at the MAEE of Elvis or George Ohr, and if you want to really emerge yourself in them, go to the Elvis Presley birthplace and museum in Tupelo or the Ohr-O'Keefe museum in Biloxi. We hope to be the mother ship that gets visitors off the interstate and, through their experience at the MAEE, encourages them to spend three or four days finding out about the many other treasures and resources the state has to offer.”

Gamblin said the location is ideal for the highly anticipated project.

“It's only fitting that such a facility honoring arts and entertainment is located in downtown Meridian, in what was designated as Mississippi's first entertainment district. It's already had an economic impact in the city with new motels and restaurants either being built or in the planning stages. The Threefoot Building, a Meridian landmark that once seemed destined for demolition, is expected to be converted into a downtown hotel with a restaurant on top.”

Turnout was significant for the facility's groundbreaking, which was held in October 2015.

“We wanted it to be a sample of what truly was to come.  The MAEE was a new experience, from the time the shovels were placed in the ground, in that we had museums, festivals and entertainers from around the state participating in the three-hour festivities.  It was truly a great day for the project and the state,” said Gamblin.

Mississippi-based Yates Construction is overseeing work on the project, which has been discussed for almost two decades. The idea for the museum first began in 1998, and again in 2001, when the lawmakers established the Southern Arts and Entertainment Center Inc., which later became known as The Mississippi Arts and Entertainment Center. In 2005, planning was sidetracked by Hurricane Katrina, with the storm's devastating effects delaying the project for several years. Organizers vowed to push ahead, however, and in 2009 lawmakers approved funding initiatives, putting the project back on schedule.

“Because of the hurricane and the economy it's taken a long time, but this is a great day for the state of Mississippi,” said Paul Ott MAEE board of directors president, who's been with the project almost since the beginning.

MAEE board members tapped LPK Architects, in association with Canizaro Cawthon Davis Architects and Gallagher & Associates, to design the building, which will feature a number of interactive exhibits.

According to LPK construction manager Jim Smith, “It's an extremely tight site, along with limited access and periodic road closures.”

Currently, site preparation is taking place. Cut and fill operation under the building foundation must be completed, along with the installation of storm drains, the tie-in for utilities and road bed construction.

Demolition of the deteriorating Meridian Hotel and a former restaurant took place years earlier, making it easier for crews to prepare the property. Workers recently completed the installation of undercut and fill material on the building pad and road beds. One key task yet to be carried out is the placement of structural piling.

Construction crews must deal with changing weather conditions, which can make it difficult to maintain site drainage. The installation of gravel on road and work surfaces also has been a concern. The most time-consuming part of the work will involve the foundation and structural steel installation, a large part of the overall building design.

Smith said, “Erosion control is ongoing. Front Street had to be closed over a weekend for storm sewer tie-ins.”

In working with the client, LPK's goal was clear from the beginning, according to Robert Luke, LPK principal.

“The vision was to create a modern structure that hones the talent from Mississippi's many artists and entertainers, while respecting the architectural heritage of Meridian. “It's a two-story modern building. The combination of brick, wood and metal speaks to the vocabulary of local architecture.”

In designing a project of this nature, the extremely tight site proved challenging, along with the numerous parties involved in the approval process. The creative team started the design process with a contextual study of the surrounding area and buildings. Luke said that the high volume, with the use of water and glass to blend the interior and exterior together, create a great deal of excitement.

Green features also were incorporated into the design. Crews are using the newest systems in lighting and media hardware to reduce consumption, while trying to take advantage of materials that are environmentally friendly, as much as possible. ​

“We are using indigenous materials which are native to Mississippi with the intent to use as many recyclable materials as possible,” Luke said. “The energy-efficiency of the building speaks to the need for low energy costs, and supports sustainable design concepts.”

Luke said he hopes visitors will take away a great deal from their visit to the new museum by “having an understanding of the vast talent of Mississippi, its artists, entertainers and architecture. It's the best of the best provided by our state and culture.”

Gallagher & Associates of Washington, D.C. was responsible for the building's exhibits and interiors. Gallagher & Associates principal Cybelle Jones said, “Institutions like MAEE can reinvigorate communities and become destinations to build regional tourism. We are excited to be a partner on this project, and build synergy of cultural tourism for the arts and arts education across the state.

“Our vision was to create a truly one-of-a-kind, world-class educational experience to bring to life the untold story of the breadth and depth of artists that have grown out of Mississippi. We wanted to embrace the story of the process of how these artists came to be, their struggles, their creativity and ultimately how they touch us, and the world with their tremendous gifts and talents. Ultimately, we hope to inspire a generation of future Mississippians to appreciate the rich history and the connection of arts in their everyday life.”

“It's always a challenge when creating an institution from scratch to determine what stories you will tell, and how to organize and present them in a manner that will connect with a broad range of audiences coming from different backgrounds and interests,” said Jones.

Gallagher & Associates works with many large institutions to design longstanding exhibits such as the Smithsonian Institution, the National Park Service, the National Archives and the National WWII Museum. This experience gives us a great background of working with both sustainable and maintainable materials and designs.”

In order to get a better feel for the area, a great deal of research was conducted, according to Jones.

“Our design team traveled across the state and visited many of the great cultural resources that already exist to get a sense of the diversity from region to region, the history and the culture. We also held stakeholder charettes across the state to hear from individuals across the spectrum of arts to make sure we were telling the story of all Mississippi artists.

Jones said she hopes visitors will be inspired by the new building, which was created to inspire, build pride and show the importance of the arts in people's lives.

“Each one of us has a spark inside, and we just need to light it to see what we have to share with the world.”