The U.S. General Services Administration (GSA) has officially broken ground on a $71.7 million Land Port of Entry (LPOE) project at the international border crossing between Madawaska, Maine, and Edmundston, New Brunswick in Canada.

J&J Contractors Inc., of North Billerica, Mass., had already begun groundwork at the site of the new building where people enter the United States through a U.S. Customs and Border Protection (CPB) checkpoint.

An official kickoff for the work, though, was held in the Multi-Purpose Center in Madawaska on Sept. 9 bringing together regional dignitaries from the GSA and CBP, representatives from Maine's congressional delegation and local officials to hear updates on the project thus far.

The LPOE, as well as the nearby $97 million Madawaska/Edmundston International Bridge project across the St. John River, represents not only a massive infrastructure upgrade in the Maine town, but a renewed connection between the community and Edmundston — divided for more than a year by pandemic restrictions on international travel.

The bridge work, too, got under way earlier this summer and is being erected by Reed & Reed Inc., a Woolwich, Maine, specialist in building bridges.

"Days like this, when we can bring everyone together again for that mutual benefit [are] really special," said Executive Assistant Commissioner of CBP's Office of Field Operations William Ferrara at the groundbreaking.

The two projects will be some of the largest construction undertakings in Madawaska in decades, the Valley Times reported. The old international bridge, for example, was built exactly 100 years ago, and has been posted with only a 5-ton weight limit since 2017. It is in dire need of replacement.

The port of entry will be significantly expanded from Madawaska's current facility, Ferrara said, and along with the new building will come technological updates and an expansion of CBP's security abilities, according to the Valley Times. In addition, the GSA noted in a press release that the LPOE is designed to accommodate non-intrusive inspection equipment.

Not only will the larger facility potentially create more CBP jobs, but Madawaska Town Manager Gary Picard told the newspaper that the upgraded border crossing will likely create more maintenance work too, with "bigger buildings to heat, bigger driveways to plow."

Already, the Madawaska LPOE processes 430,000 southbound privately owned vehicles a year — more than 115 times the total population of the town. But municipal leaders in both Edmundston and Madawaska have pushed for additions to the project to promote even more international travel and flow of commerce between the United States and Canada.

Part of that was convincing the Maine Department of Transportation (MaineDOT) to widen the bridge to accommodate a pedestrian and recreational vehicle lane.

The entry point, meanwhile, will include a large piece of art, which will be visible from Madawaska's Main Street, and which Picard hopes will be an attraction for visitors. While the GSA already requires a half-percentage of its project budgets to be spent on art, Picard worked directly with the feds to be sure the port of entry fits within the vision laid out in Madawaska's decade-long downtown revitalization plan.

"It's hard to put into words the amount of work it's taken to get to this point," he said to Madawaska's local newspaper. "It's taken an enormous amount of collaboration."

As of Sept. 10, GSA spokesperson Paul Hugues was unsure what the immediate next step in the LPOE's construction will be, reported several Maine news outlets, but the federal agency noted on its website that it estimates the two projects to be finished in late 2023.

The timeline for the new LPOE's construction is tied to the MaineDOT and the New Brunswick Department of Transportation and Infrastructure (NBDTI) international bridge project. GSA said it is committed to ensuring that the port of entry is operational when the bridge is completed.

The current land port will remain open throughout the construction, according to the GSA website.

The federal and state governments, as well as their counterparts in Canada, have been planning upgrades to the bridge and land port since at least 2009, GSA noted. 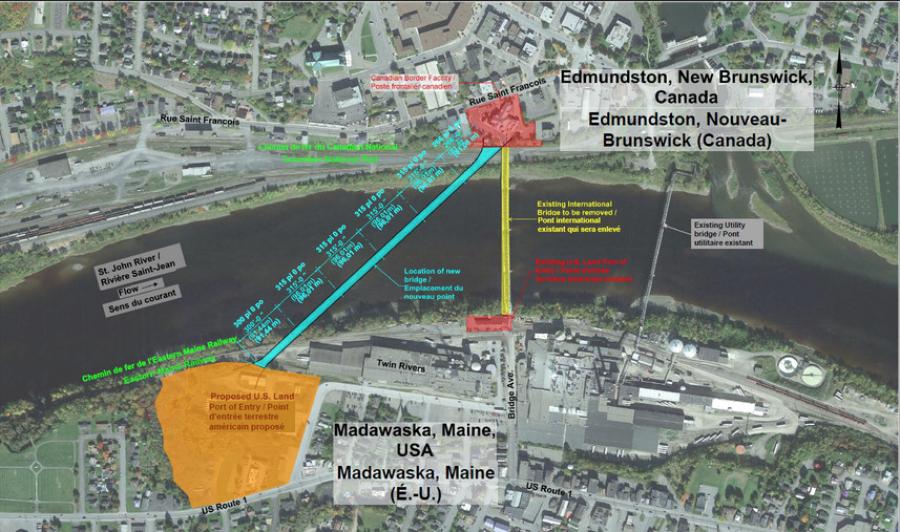