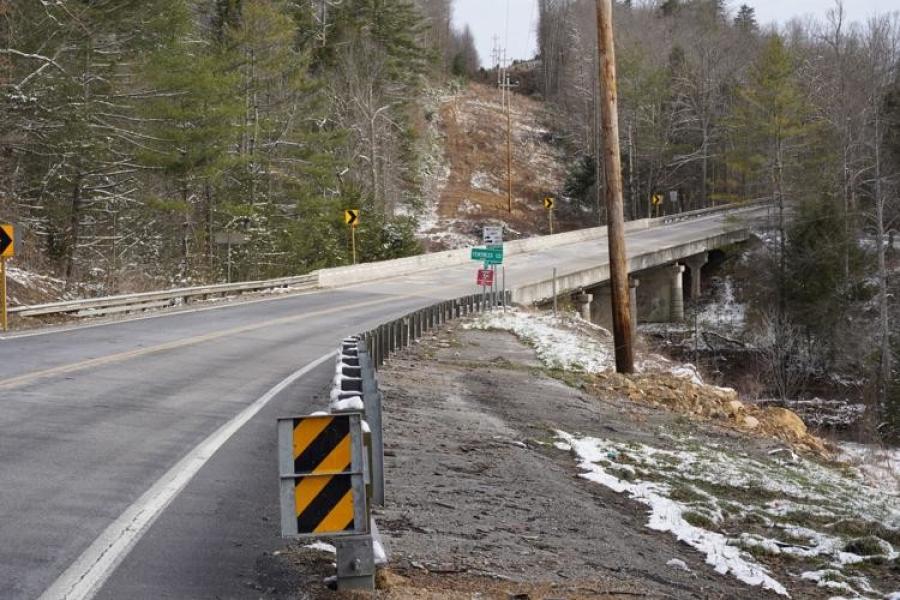 The existing bridge of Clear Creek serves more than 7,000 vehicles each day. The new bridge will be built on a new alignment, allowing the current bridge to remain open during construction.

Dignitaries and citizens came together March 11 to attend a groundbreaking ceremony in Clarkrange, Tenn., prior to the building of a major new bridge along U.S. Highway 127.

Construction of the $85.3 million Clear Creek Bridge construction is part of a larger project to connect the towns of Crossville and Jamestown in east-central Tennessee.

Most of the bridge work will take place in Cumberland County and is expected to finish around August 2026, the Crossville Chronicle reported.

It also is the next phase to improve U.S. 127 from Interstate 40 in Cumberland County north into Fentress County.

Local leaders and motorists are rejoicing over the news, said a prominent Tennessee lawmaker at the ceremony.

"It's a very impactful project," U.S. Rep. John Rose, the congressman for both counties, as part of the 6th District, said at the groundbreaking. "Ultimately, we want to see a four-lane highway from Crossville all the way to Jamestown. If we want to make an impact on economic development in Fentress and Cumberland County, creating a corridor that takes traffic throughout the region is the answer. This is an important step.

"I'm 57 years old, and my grandparents lived in Allardt, so I've traveled this road many times," he added. "Everyone around here knows how important this will be."

An Important Connection in East-Central Tennessee

The current U.S. 127 bridge across Clear Creek, separating the two counties, averages 7,000 cars traveling over it each day, according to the Tennessee Department of Transportation (TDOT).

The Chronicle reported March 14 that the new bridge will be erected about 1,700 ft. to the east of the existing bridge.

Jones Bros. Contractors in Mt. Juliet, Tenn., is not only building the bridge, but will oversee the entire 3.3-mi.-long project, which includes expanding U.S. 127 from two to five lanes, with two lanes in each direction and a dedicated turn lane.

The improved roadway will extend from near North Lowe Road in Cumberland County to north of Tennessee Highway 62 in Fentress County.

Work on clearing vegetation and utility relocations throughout the project area is under way and following that, grading work and the construction of the new bridge will start, the state transportation agency noted.

"The controlling object on this project is the 1,425-ft.-long bridge," noted TDOT Deputy Commissioner Paul Degges. "Fortunately, it's on new alignment, so I'm not having to build it in two phases."

Construction in the area, however, also comes with multiple challenges, he explained.

"Clear Creek is an environmentally-sensitive feature," Degges continued. "We've put a lot of effort into making sure we don't do anything that could pollute Clear Creek. That's an issue the community has talked to us about. Several of the piers on that bridge will be over 100-ft. tall. Building a footing and the supports for a bridge 100 ft. in the air is challenging work."

Completion on the new Clear Creek Bridge is expected to be in August 2026.

"Public utilities are up and down the highway," he explained. "The electric, phone and cable poles must move. Then you have the water and sewer lines. We have to move all of those to start the construction. We also must keep traffic open; if we just closed the roads, we could build these a lot faster, but because of the phasing work, it takes some time.

He added that TDOT's goal is to keep a continual flow of traffic moving through the corridor.

"This is a pretty big job with a completion date in 2026," Degges said. "The next [phase of the] project will hopefully start in 2025. You're looking at maybe 2028 to finish the entire corridor."

First Phase Ongoing, While Others Planned

Jones Bros. crews also are continuing work on the first phase of the U.S. 127 road project, designed to improve the highway from I-40 to near Potato Farm Road, for a total of 4.87 mi. The first section of the road will have two traffic lanes in each direction and a dedicated center turn lane before transitioning to a four-lane divided highway.

Work began on that stretch of road in spring 2021 and is expected to continue through June 2025, according to TDOT. The contractor was awarded the contract following its $62.9 million bid.

The Chronicle reported that the two projects will be connected by improved sections from Potato Farm Road to near Hollow Lane, totaling 3.45 mi., and from Hollow Lane to near North Lowe Road, a length of just over 3 mi. Those stretches of U.S. 127 are to be improved two-lane highways, with right-of-way and utility processes under way.

More road projects also are planned in Fentress County that would extend the upgraded U.S. 127 from the area near Little Road to the existing four-lane section of highway north of the community of Grimsley.

"In Tennessee, we are a pay-as-you-go state," Degges explained. "We do not borrow money and incur debt to build roads. When we start winding down the [U.S. 127] project north of the interstate, then we let the next project. [After that, we will] contract out the next part going south and that will tie the project together."

Many Doubted the U.S. 127 Project Would Happen

Representatives from Cumberland and Fentress counties, along with state officials, were on hand in Clarkrange for the groundbreaking of the latest section of the road and bridge construction.

"This is a great day for Cumberland County," said County Mayor Allen Foster. "I've worked a lot with Fentress County Executive Jimmy Johnson to get this thing moving. A lot of constituents have lived here a long time and didn't think they'd ever see it happen."

Crossville Mayor James Mayberry noted that his town will also feel the impact of better roads in Cumberland and Fentress counties.

"This is going to open up a lot more business and job opportunities for everybody," he said. "It's a win-win for everybody involved."