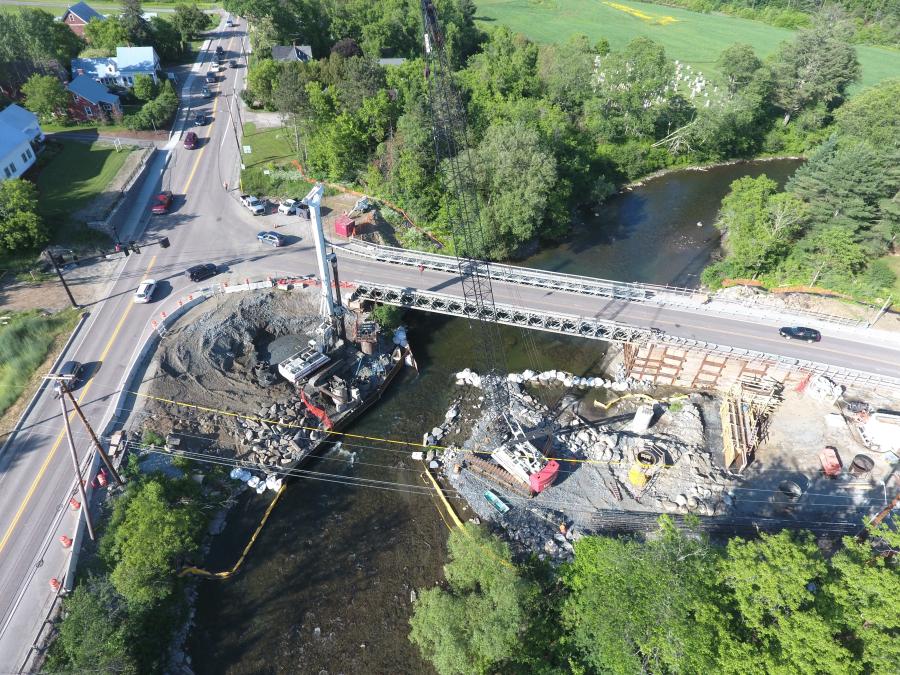 The $8 million bridge replacement in Montpelier, Vt., also includes the reconstruction of Route 2 in the vicinity of the bridge. (Josh Maxfield/GPI photo)

Construction crews in Vermont are counting down to completion of the new VT 14 bridge over the Winooski River in the village of East Montpelier. The long-awaited replacement will be wider than the existing structure, with a third lane and traffic signal added to aid left turns onto U.S. 2, as well as onto the bridge from U.S. 2.

“This is a major thoroughfare, with a great deal of traffic,” said Carolyn Carlson, Vermont Agency of Transportation (VTrans) project manager. “Traffic control has been one of the key issues on this project.

“For the traveling public, this is going to make such a difference in their commutes. At the interchange, we've installed a traffic light to help move traffic. That's one of the big pieces of the puzzle.”

The $8 million undertaking also includes the reconstruction of Route 2 in the vicinity of the bridge. CCS Constructors Inc. of Morrisville, Vt., is the project's contractor, while Stantec serves as consultant design manager. 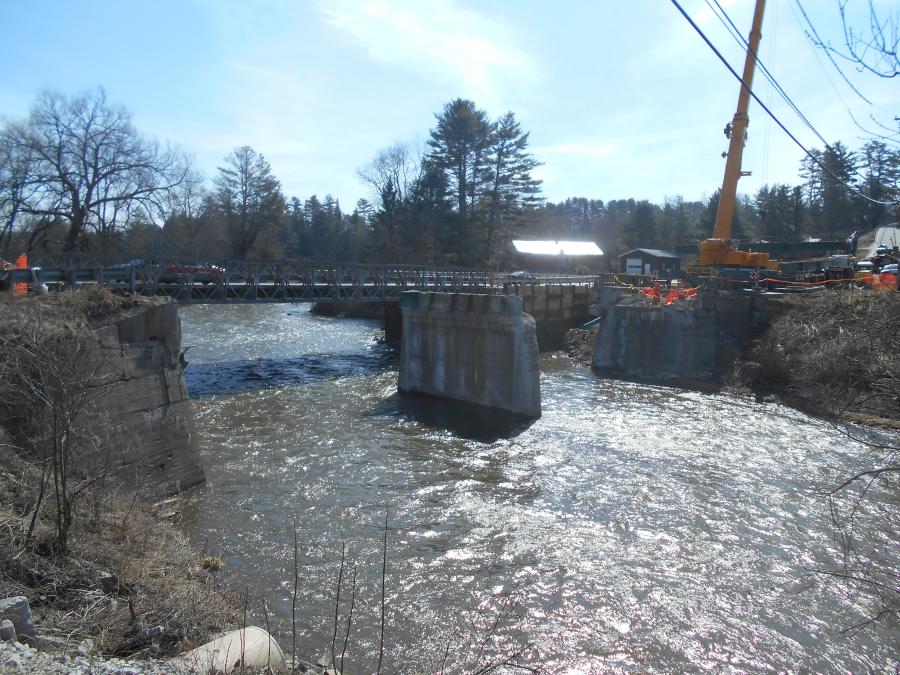 Built in the late 1930s, the two-span steel and concrete bridge had deteriorated, and didn't meet current design standards. According to Carlson, there was clearly a need for a new one.

“The bridge was in such poor condition. It's an area that many people travel, so there are a lot of cars in the area.”

Carlson said the project has been in the making for a long time.

“Going back to the design phase, it was 20 years ago that discussions began, from recognizing the need to replace the bridge to where we are now. There were many different scenarios for the design.”

In addition to hiring a consultant, officials had to address right-of-way issues and purchase some nearby homes.

“It was very time-consuming, so it's exciting to see this project almost completed,” said Carlson, who added that a lot of work was done after hours, so as not to disrupt the public. Still, not everyone was happy.

“When work was done at night, a lot of people were upset with the noise. We actually got hotel vouchers for those who thought the noise was too much, and a few people did use them. Some property owners were not happy at the time, but now residents are ecstatic with where we are on the project. I think when the bridge opens, everyone will be quite pleased.”

Initial work on the project began in late 2016, with the installation of drainage structures under U.S. 2, trenching of new telecommunications conduits and relocation of utility poles.

In the summer and fall of last year, VTrans reconstructed roughly 900 ft. of Route 2. Old, rigid concrete pavement underlying the roadway was removed, and a new sidewalk was put in place. A temporary bridge was installed last November, to be used while the VT 14 bridge was removed and replaced.

To ensure safety during ongoing construction, the temporary bridge was shut down to traffic, but is now open. VTrans limited the closures up to 14 days, but it took only half the time. A detour route was established for the brief closure periods. 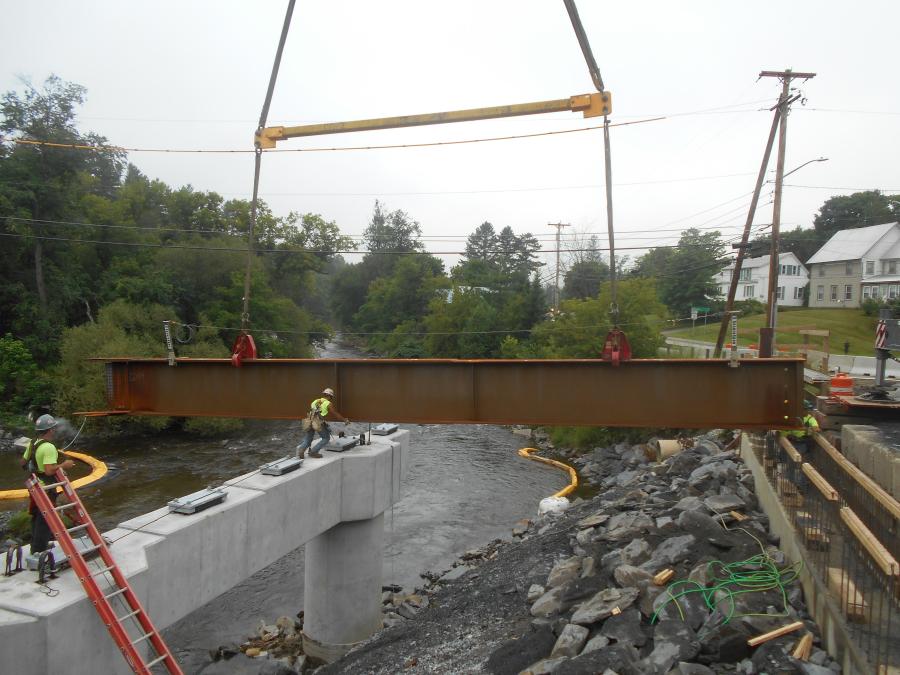 Replacing the VT 14 bridge has not been a simple task. Traffic volumes on Route 2 average 15,000 vehicles daily. Any interference with traffic during peak travel times means extended traffic delays. In addition, existing rigid concrete pavement slabs under U.S. 2 roadway needed to be removed, new drainage pipes and culvert installed and telecommunications and power lines either tunneled underground or moved.

Traffic volumes, impacts on local businesses, residents and regional travelers were all considered during the planning stages. The construction method selected used a temporary bridge upstream of the existing bridge to carry traffic while the deteriorated bridge was being demolished and replaced with a new bridge. This method, along with reconstructing U.S. 2 at night, limited the need for road detours.

To accelerate construction of the project, drainage pipes and telecommunication conduits were installed under U.S. 2, and a retaining wall was built near the junction of VT 14 and U.S. 2. Route 2 was fully reconstructed, with most of the work completed after hours, with a temporary bridge installed.

In 2018, workers began tearing down the existing VT 14 bridge, with the new bridge being built in the same place, and slated to open to traffic before the end of the year.

“It was in very poor condition, especially the railing. You could see the rebar. It had gotten to the point where it needed to be replaced.”

Also known as Bridge #68, the bridge was a steel beam structure with ornamental concrete railings, and was considered a contributing structure in the East Montpelier Historic District.

The ornamental concrete railing with hexagonal balusters was typical of 1930s bridge design across Vermont. The style of the new railing was influenced by the former bridge, and its location within the district.

Barker said it took about four weeks to bring down the old structure, and all went according to plan.

“We had to contain everything, and then saw cut the deck and curb. We took the deck and curb out in pieces, and they were crushed off site. Steel was later taken down and stuff had to be jackhammered. We didn't run into any problems.” 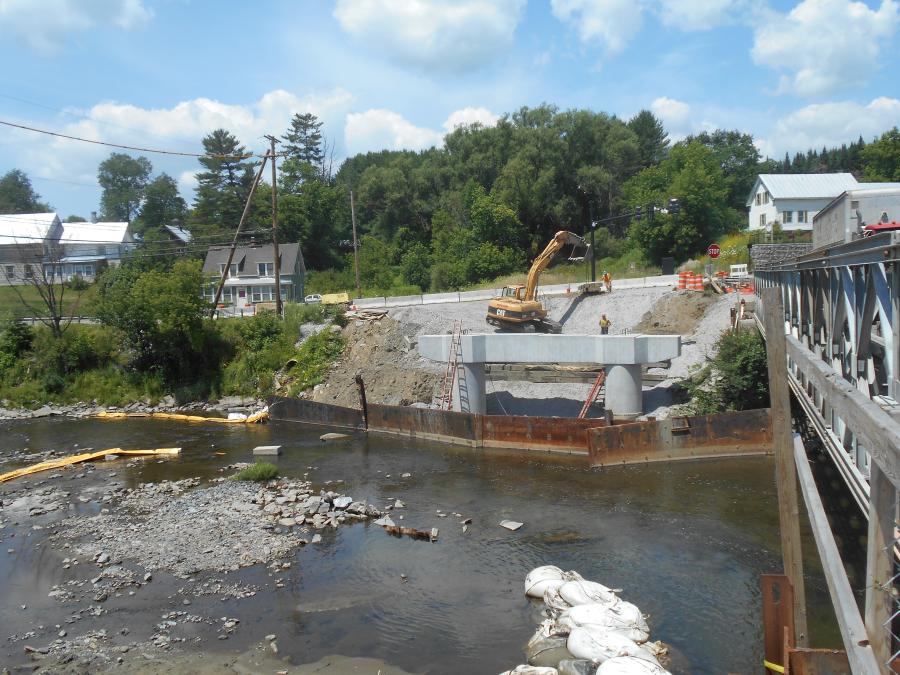 Equipment used during construction has included excavators, dozers, rollers, standard paving equipment, a rotary drilling rig and two large cranes. Concrete, steel, gravel, sand and pavement have been among the materials needed to carry out the work. Crews have used a lot of pre-cast elements to expedite parts of construction, including pre-cast deck panels and two pier caps the subcontractor built off site and delivered in late spring.

As for the main challenges on the job, Barker said during the first year of construction, working at night was a concern.

“It always makes things more difficult. It's dark, so visibility is an issue, safety is an issue. You have to pay more attention to what you're doing and to your surroundings. You have to have light towers, and you just have to be more careful.”

As the project moved forward, space became an issue.

“On one end of the bridge, you have plenty of room, but on the other there's very little. You have to allow for that, which can be frustrating when you're dealing with a tight area.”

Crews have performed a wide variety of tasks during the time allotted for the project, including building a causeway to access the in-water bridge pier and then removing the pier except its footing. Workers drilled a shaft, installed an 80-ft. rebar cage and began pouring concrete into the cage to form piers to support the new bridge. They also had to drill sheet piles on the U.S. 2 side of the river to separate the river from the work zone. 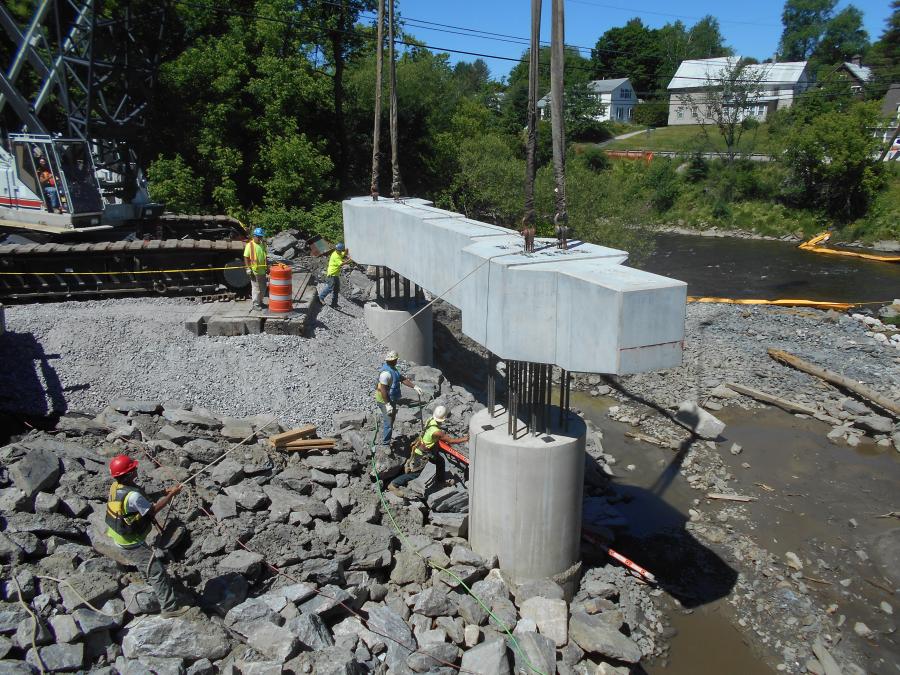 In addition, workers had to drill and pour the second of two drilled shafts on Pier #1, and install traffic signal poles, mast arm and lights. The signals will remain covered and will not be operational until the new bridge is in use.

The bridge deck was assembled, first with the delivery of steel beams and then 44 concrete panels that were placed on top of the steel. Ultimately, the project site will be restored and final paving and crosswalks will be completed. The new bridge is expected to be open to traffic no later than Nov. 1.

Said Carlson, “Many VTrans employees have worked on the project, and to see this coming to an end brings great joy that we can improve the infrastructure and allow Vermonters to commute and live in a safe manner.”