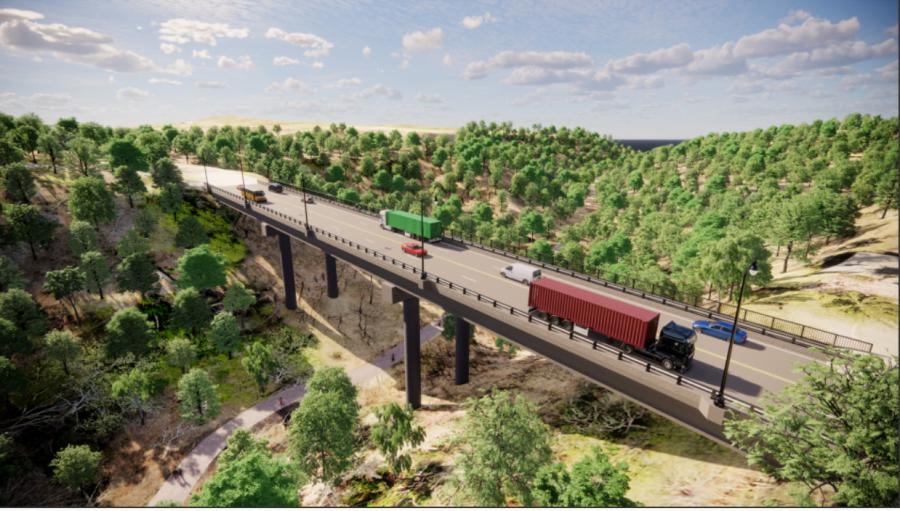 A rendering of the new Fern Hollow Bridge reflects the overall design concept but does not have full detail or shading. Certain aesthetic aspects are subject to change in final design and construction. (Courtesy of PennDOT)

The first signs of replacement for Pittsburgh's collapsed Fern Hollow Bridge in Frick Park were visible May 9 when construction crews began pouring concrete for the underground support for the first bridge pier, followed later in the week by drilling activities.

The work came more than three months after the bridge failure that sent a Port Authority bus and five other vehicles into a ravine below, injuring nine people.

Steve Cowan, a spokesperson of the Pennsylvania Department of Transportation (PennDOT), told the Pittsburgh Post-Gazette that over the prior few weeks, crews have been boring holes in the ground under the bridge for the first caissons, which will support two sets of columns that look like double capital Ts.

The earlier bridge had steel supports at each end. It connected Squirrel Hill to Point Breeze along Forbes Avenue before its collapse on Jan. 28.

The new span, which will cost a maximum of $25.3 million, is being built under an emergency declaration that allows work to begin on the substructure while the top of the bridge is still being designed.

According to the Post-Gazette, the contractor is building the new bridge from the ground up. That will allow HDR Inc., an engineering and design firm based in Omaha, Neb., to add aesthetic touches to the top part of the structure, which had a plain design when initial plans were presented in early February.

However, TribLive.com, the online service of the Pittsburgh Tribune-Review, noted that the design — which has been compared to a basic highway overpass — has drawn criticism from some of Pittsburgh's elected officials and community groups who say the new span should match the aesthetic of the historic park in which it is situated. The design team is continuing to work with them to consider changes to items such as the railings and lights on the new bridge.

Due to a shortage of steel, PennDOT and HDR chose to use precast concrete I-beams for the bridge and are hopeful most of the construction can be completed this year, but the final completion date will be determined by how quickly those beams are available, the Post-Gazette noted.

The new Fern Hollow Bridge was designed with four, 10-ft.-wide travel lanes; 2-ft.-wide shoulders on each side; a 5-ft.-wide sidewalk on the north side; and a shared path for bicyclists and runners that will be 10-ft.-5-in.-wide on the south side. Some advocates want to reduce traffic to two lanes to increase room for bikers and pedestrians.

When it is finished, trees will be planted to replace those that were damaged in the accident and mitigate any other damage that occurred during construction.

Cowan told TribLive.com that construction at the site will take place weekdays from 7 a.m. to 5 p.m. and is not expected to affect nearby residents or commuters.

New Bridge Put on a Fast Track to Completion

Pittsburgh Mayor Ed Gainey and Gov. Tom Wolf issued emergency declarations in the wake of the bridge collapse, paving the way for work to begin sooner. Within a week, city and state officials had finalized a plan to allow PennDOT to design and construct a new bridge at the site.

"The designs are in their advanced stages, but have not yet been competed," explained Maria Montaño, a spokesperson of Gainey.

TribLive.com reported the city will take control of the bridge once it is complete.

Because the construction is happening under an emergency declaration, some elements of public process are waived as officials work to hasten the bridge project. Deputy Mayor Jake Pawlak has said public input will be limited and some public procedures will be shortened or scrapped, according to the TribLive.com.

The National Transportation Safety Board is still investigating why the old bridge, which was rated in poor condition for more than 10 years, collapsed. That review could take as long as 18 months.