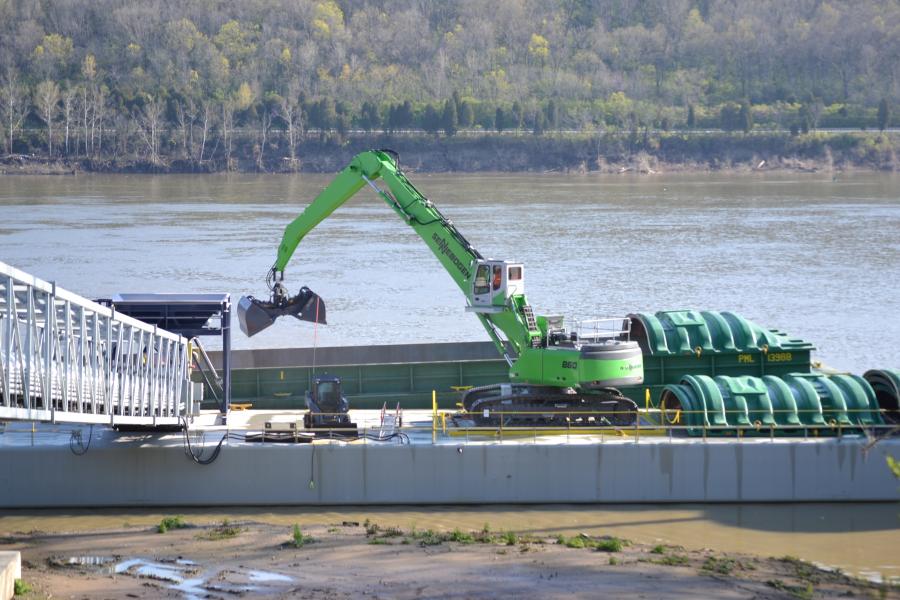 Cost efficient electric-drive 860 R-HD keeps fuel away from the river, it’s a win/win.

CHS, the farmer-owned agribusiness cooperative, had named James to set up a barge terminal at mile 457 on the Ohio River, near Cincinnati. The company had purchased the terminal to supply the distribution facility for CHS Crop Nutrients Division. Receiving granular fertilizers from all over the world, the 27,000-ton dry storage facility on the site trucks crop inputs to farms throughout America's eastern Corn Belt region.

As Terminal Manager, James is responsible for offloading the material and moving it into storage by conveyor as cost-effectively as possible. As he set out to equip the terminal, he told Ben Sutkamp at Murphy Tractor that his goal was 500 tons per hour. Sutkamp told him, “I have a machine that can do that for you.”

The big green machine quickly showed that it would keep pace with the terminal's new conveyor system. Meeting his throughput goal, James is also pleased with the SENNEBOGEN's cost to operate. He was already convinced he wanted an electric-drive machine before he first contacted Murphy Tractor, the regional dealer for SENNEBOGEN. “The previous facility here also had electric power to operate its crane. Electric power keeps fuel away from the river and it's more cost-efficient. Environmentally and economically, it's a win/win.”

SENNEBOGEN was also a name that James knew well from his previous work at a steel mill. “The operating environment in a stainless steel plant is pretty brutal, and the SENNEBOGEN equipment stood up to it very well. From that experience, I knew what I was dealing with when Ben told me he represents SENNEBOGEN in this area.”

James reports that Sutkamp and the SENNEBOGEN Regional Sales Manager visited the terminal on several occasions as his plans were developing. “I explained the set up here and what we're trying to do. Both guys are excellent to work with, and very supportive. Anytime I've contacted them with a question or an issue, they're on top of it.”

The SENNEBOGEN team recommended the 860 R-HD “D” model, a 180,000 lb. machine. The machine is equipped with a 59' reach and fitted with a 5.5 yd. clamshell bucket. The operator station is SENNEBOGEN's hydraulically elevating maXCab. Mounted on a crawler undercarriage, the machine sits level with the river on a barge with a crane mat.

“We have four smooth-out ratchets tied to the running gear, welded down to the barge,” James explains. “The crawler base gives us a better footprint. On top of that, the feeling of stability is phenomenal! When you reach down with a 5 ½ yard clam completely full of fertilizer and you're really not rocking, and there's no tracks lifting up off the ground, you're really a lot more comfortable while you're up in the air in the cab.”

James notes that, while providing the operator with a clear view to the material he is unloading, the elevating cab also adds a safety factor to the terminal. “You'll have a crew down on the barge or a guy doing the rig-up for the skid steer off to the side, but in the elevated cab, you're up above and able to see everything. The cameras are excellent; you don't have a blind spot around you at all.”

Before he signed off on the purchase of the 860, James also discussed his requirement with another vendor. He says he preferred the SENNEBOGEN line-up from the outset because “…it's a true material handler, not a converted excavator.”

Asked what advice he would have for anyone else considering SENNEBOGEN for a new barge facility, James's response was simple: “Pull the trigger!”

For more information on the full line of SENNEBOGEN green line material handlers visit the web site at www.sennebogen-na.com