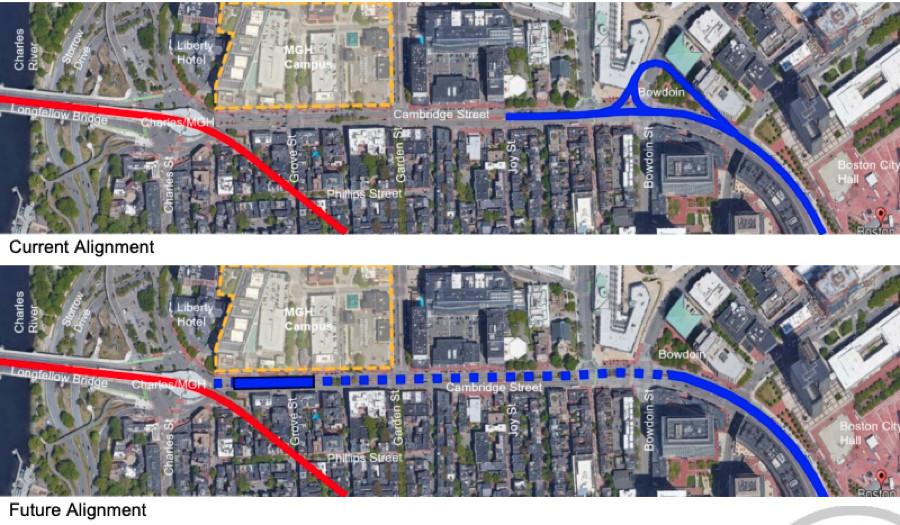 An engineer with the Massachusetts Bay Transportation Authority outlined a plan before an MBTA board on June 7 that would create a subway extension linking Boston's Red and Blue Lines at a cost of $850 million, while also requiring nearly 10 years of design and construction.

If the project's funding can be found, work on the transit line extension could break ground in 2025 and be completed by 2030, said MBTA Chief Engineer Erik Stoothoff.

In his presentation to the Authority's Fiscal and Management Control Board, Stoothoff described the updated scope of the project, which would feature a more than 2,000-ft.-long tunnel underneath Cambridge Street to lengthen the Blue Line from its current endpoint at Bowdoin Station to the Charles/Massachusetts General Hospital Red Line station.

Under the plan, the Bowdoin Station would be closed permanently, adding Blue Line platforms at Charles/MGH, and connecting the station to a proposed Mass General building to be constructed at the medical center, Stoothoff explained. Passengers would exit the new Blue Line station via escalators to the lobby of the existing Charles/MGH station or to the planned clinical facility on Cambridge Street.

He estimated the construction costs at $740 million, with another $110 million set aside for design, administration, and train costs.

CommonWealth Magazine reported that the spending plan for the concept estimates the cost of tunnel construction at $270 million, or nearly $114,000 per foot. A new Blue Line station was estimated at $60 million and the reconstruction of Cambridge Street at $20 million. The proposal includes $140 million for contingencies, $50 million for additional design work, $130 million for inflation, and $130 million for other measures.

The effort to join the Red and Blue Lines — the only two MBTA subway lines that do not meet — has been pushed for decades by North Shore elected officials and transportation advocates. If it were to be built, the connection would allow Blue Line commuters from East Boston and Revere to reach their jobs in Cambridge more easily, they say, while helping to reduce congestion on highways and in tunnels, according to NBC 10. The idea also offers better connections to the airport for Red Line riders coming from Cambridge and Somerville.

Stoothoff said the connector would be built using a cut and cover construction method, where a huge trench would be dug down Cambridge Street, the subway line would be built in place, then the trench is recovered.

Revere Mayor Brian Arrigo and Chelsea City Manager Tom Ambrosino both testified in favor of moving ahead with the project during the June 7 meeting, according to CommonWealth Magazine, as did Boston mayoral candidate Michelle Wu, former state transportation secretary James Aloisi, and a host of advocates.

The MBTA has spent limited funds on preliminary designs and has $15 million on hand to do more design work, but that leaves most of the cost unfunded. Joe Aiello, the chair of the control board and a leading proponent of the connector, told the magazine he assumed acting Massachusetts Transportation Secretary Jamie Tesler and MBTA General Manager Steve Poftak would include funds in future capital spending plans for the project, but no commitments were made at the meeting.

The Red and Blue Line connector may face another funding difficulty, though, as a separate presentation to the control board suggested that the MBTA will be staring down a huge gap in the future between potential capital projects and available funding. CommonWealth noted that one chart showed MBTA funding needs in the $3 billion range for each of the next nine years with available monies nowhere near that level. In fiscal year 2024, the gap begins growing larger, rising to about $2.5 billion a year in fiscal 2026 and beyond.