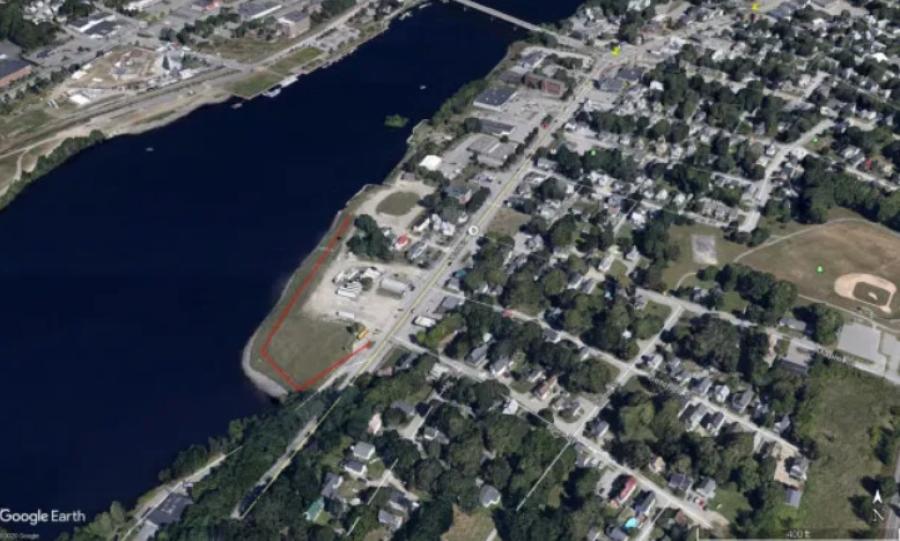 Location of the planned 300-yard extension of the Brewer Riverwalk, outlined in red. (Maine Department of Transportation photo)

Visitors to Brewer's Riverwalk will be able to extend their trips along the path in a couple of years, with the Maine Department of Transportation (MaineDOT) announcing that a 300-yard extension to the mile-long trail is in the works.

The new section will extend the trail to the south, beginning at Hardy Street by Mason's Brewing Company and taking people around the trajectory of the Penobscot River to South Main Street. Construction on the project — the third phase of the Riverwalk — is slated to start in the spring of 2023.

The project is estimated to cost $625,000, with $230,000 of that coming directly from Brewer taxpayers, according to MaineDOT.

Two decades after the Riverwalk project was first proposed, the trail's scenic view and multiple amenities — including a children's garden and free wi-fi — has made it a popular recreational spot in the Bangor area, bringing foot traffic and economic development to Brewer.

There are no plans to stop construction of the trail. City officials hope to continue to extend it along the Penobscot as they receive new federal funding, said D'arcy Main-Boyington, Brewer's economic development director.

City officials began envisioning a third phase to the path shortly after the second phase was finished in 2019, and they discovered that MaineDOT had some unused federal funds available for use in Brewer, Main-Boyington added.

"We certainly didn't want to have to turn those funds back over to the federal government," she explained. "We want to use them right here."

The first section of the Riverwalk starts at Hardy Street, by Mason's Brewing, and extends north up to the Joshua Chamberlain Bridge that carries traffic across the river between Bangor and Brewer.

In 2018, construction crews dug two tunnels underneath both Chamberlain Bridge pilings to extend the Riverwalk farther north. The tunnels allow Riverwalk users to avoid crossing the busy intersection of Wilson and Main streets, and they take users another half-mile upriver to Veteran's Park on Penobscot Street, near the State Street bridge.

As with the first two phases of the pedestrian path, there will be light fixtures every 30 ft. along the third phase of the pathway. Besides providing lighting at night, they also will be the location of transponders for free, 90-minute wireless internet service for passersby, as well as security cameras.

The new path will be asphalt and 10 ft. wide, with grass on either side. While the Brewer Riverwalk has been built in phases, it has been designed to provide a seamless experience to everyone using it to walk or bike, explained Travis Wolfel, of the San Diego, Calif., engineering firm Kleinfelder, and the lead designer of the third phase.

There will be cross culverts on the river side of the trail that will collect water flowing in from the Penobscot River and deposit it back into the body of water. There also will be benches along the stretch, though officials have not yet determined where they will be located, Wolfel said in a video posted by the Maine DOT in February.

The city of Brewer also is designing a sidewalk along South Main Street, where the extended Riverwalk will end, according to Wolfel.

The trail has proven especially popular in the past year as people sought out socially distant, outdoor recreation during the pandemic.

"It [was] one of those few places where I think people felt safe," Main-Boyington said.

Brewer officials tie the gradual increase in foot traffic to the development of new businesses and commerce in the area.

"We want to build beautiful spaces where people can get out and get some exercise and be healthy," she continued. "We also want to make the economy healthy."