Winter shoaling has been an issue for the harbor since it was dedicated in 1964. 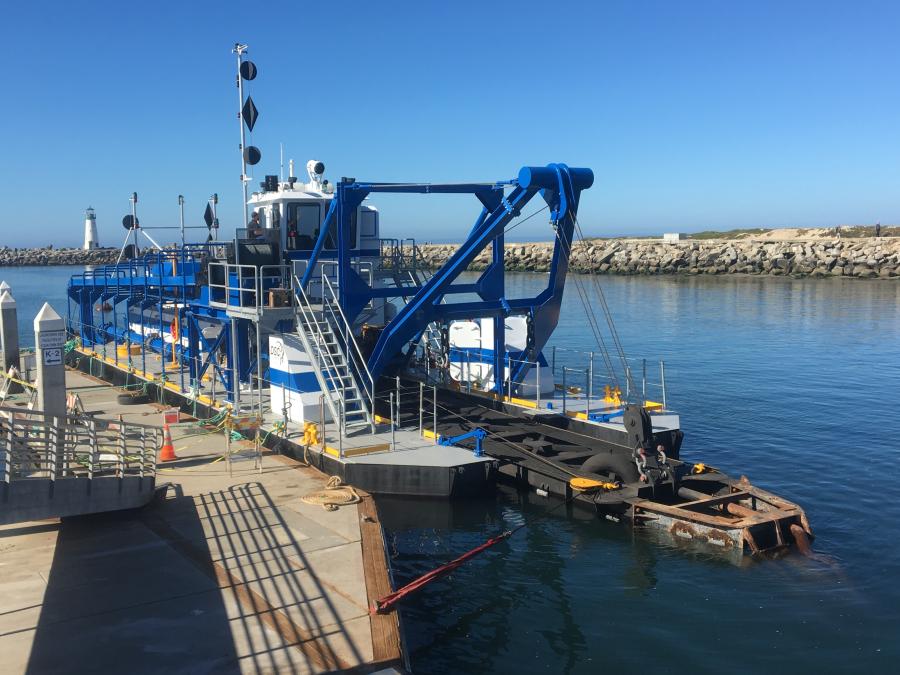 A new dredge from DSC Dredge LLC — the “Twin Lakes” — was delivered to the Santa Cruz Harbor in June.

The winter of 2016 was an unusually harsh one for the Santa Cruz Small Craft Harbor in Santa Cruz, Calif. Four years of drought was followed by an El Niño season that brought storm water runoff, high tides, high surf and swells — rapidly creating a complete shoaling of the federal entrance channel to the harbor and blocking all boats from entering or leaving. The dredge “Seabright” that had served the harbor for 30 years labored to keep up, and frequent breakdowns only compounded the problem. Fortunately for the harbor members and visitors, a new dredge from DSC Dredge LLC — the “Twin Lakes” — was scheduled for delivery in June.

“In the Santa Cruz Harbor, the inlet can sand in with just one storm, closing off the harbor and creating the worst conditions imaginable for dredging,” said Charles Johnson, director of domestic sales for Reserve, La.-based DSC Dredge. “The channel should have a depth of 20 feet at low tide. There were times this winter when the depth was only a foot or foot-and-a-half. The Seabright, which also was built by DSC 30 years ago, was struggling to keep the channel clear, but it really was at the end of its useful life.”

Winter shoaling has been an issue for the harbor since it was dedicated in 1964. It resides in an area of the California coastline where there are no natural features to protect a deep entrance. For a number of years, the harbor relied on contract dredging supported by the federal government and the Port District. With uncertainties surrounding funding each year, the District began setting aside money to help purchase a dredge for the harbor. Sharing the cost of a new dredge with the federal government, the District took delivery of the Seabright in 1986.

The Twin Lakes, commissioned from DSC in April 2015, was christened on July 20 this year. It is a custom-built, 16 by 16 ft. (4.8 by 4.8 m) dredge with a hull-mounted pump. It features a PLC operating system with color touch-screen controls, Global Positioning System (GPS), electro-proportional hydraulic circuits, high-capacity service water system and an inline direct marine-style transmission for dredge pump gear ratio reduction. A planetary winch provides the swing operation. A magnetic flow meter shows the operator the velocity of the material being moved, providing information on the dredge's efficiency. With two engines — a Caterpillar C32 dredge pump marine diesel engine and a Caterpillar C18 marine diesel-powered electric generator — the dredge fully complies with federal EPA and California CARB environmental standards.

“With the launch of the Twin Lakes in June, the harbor members will now have a much easier time with winter storms. In addition, because dredged sand is pumped from the harbor to nearby Twin Lakes State Beach, the area beaches benefit from the provision of fresh sand,” noted Johnson. Dredging at the harbor typically begins in November and concludes in March or April.

The Seabright, which had never left the Santa Cruz Harbor during its 30 years of service, was sold on Craigslist to a Palo Alto company for $5,000.