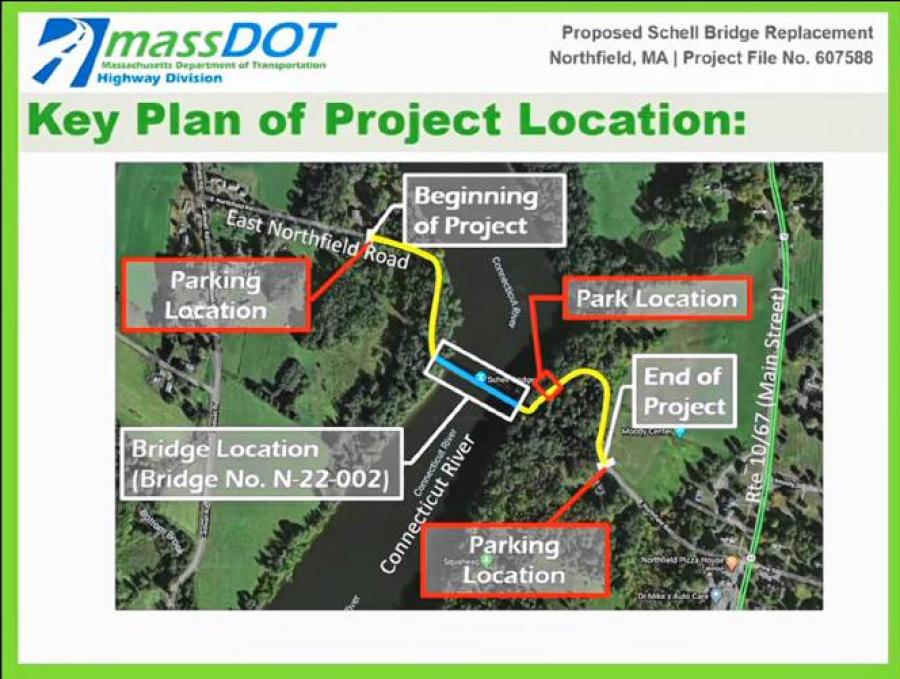 The Schell Bridge reconstruction project will involve roadway work starting about 940 ft. west of the bridge and ending about 1,025 ft. east of the bridge. (MassDOT webinar screenshot)

Northfield, Mass., residents are learning more about the Schell Bridge reconstruction project in their town. The Massachusetts Department of Transportation (MassDOT) will be overseeing the work when it is scheduled to begin in the spring of 2022.

The proposed project consists of the complete replacement of the Schell Bridge, which carried East Northfield Road over the Connecticut River before being closed since 1985 due to deterioration that rendered it unsafe to use. The existing span will be replaced with a pedestrian and bicycle bridge, while the new bridge also will be able to support smaller emergency vehicles, such as an ambulance.

The agency currently is reviewing those comments and, where feasible, incorporating them into the design, she wrote in a letter to Northfield citizens.

The new plan was produced by the engineering consulting firm, WSP USA, headquartered in New York City, and contracted through MassDOT.

Next, the final designs will be completed, and the project is expected to be advertised for construction bids in the fall or winter of 2021, with construction beginning the next year and finishing within three years of the start date.

The total project is estimated to cost $22 million, with 80 percent coming from the Federal Highway Administration (FHWA) and MassDOT funding the remaining 20 percent. However, the estimate does not include any right-of-way acquisition costs.

The enterprise will involve roadway work starting approximately 940 ft. west of the bridge and ending about 1,025 ft. east of the span. Because the bridge has been closed to vehicular traffic for decades, a detour will not be required.

According to the project overview from Andrew Benkert, a WSP engineer, the proposed structure will feature a steel-tied arch main span and two steel girder end spans. The entire structure will have a concrete deck and a hot mix asphalt surface for a shared-use path over the new bridge, which will be 18 ft. wide on the bridge and 14 ft. wide on the approaches.

The existing abutments and wing walls will be retained due to their historic value and unique aesthetic configuration. The two bridge piers will be reconstructed in approximately the same locations, and concrete form liners will be used to provide a similar visual representation of the existing piers.

"Currently, no parking areas exist anywhere near the site," Benkert said. "It has been proposed to construct two small parking areas at each end of the project. The parking area is currently sized for three vehicles, with one spot dedicated to handicap accessibility."

A small park to memorialize the Schell Bridge also will be constructed on the north side of the east approach roadway. It will include a memorial plaque and monument consisting of elements taken from the existing bridge structure.

According to the overview, snowmobiles and horses will not be allowed to cross the bridge. Snowmobiles could cause damage to the pavement and concrete deck. Horse access would necessitate having higher railings, which would impact views from the bridge. In addition, it could pose a safety issue to mix horse and pedestrian traffic.

Upon completion of the construction, ownership of the structure will be transferred from the town of Northfield to the Massachusetts Department of Conservation and Recreation (DCR).