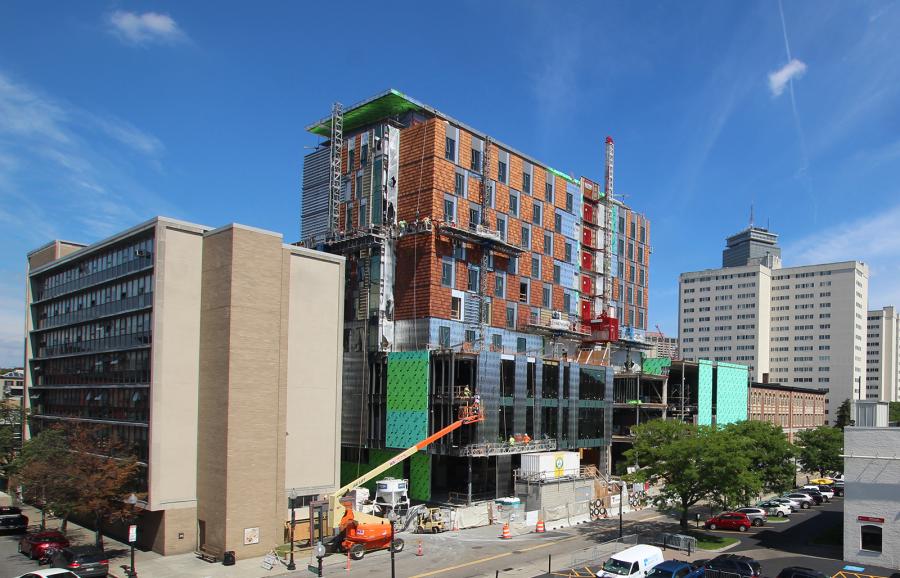 Andrew Hurlbut photo Construction of the center began in May 2015, and a temporary occupancy permit is expected in April 2017.

New England Conservatory (NEC) in Boston is awaiting the completion of a new Student Life and Performance Center (SLPC). This anticipated addition will provide students and faculty with state-of-the-art facilities that will accommodate the needs for rehearsal, lesson, practice and classroom space of the resident students, as well as those participating in Preparatory and Continuing Education programs.

The center will feature a college student residence at the top of a student life complex. Plans are for it to include a new state-of-the-art library, as well as an Opera Studio with backstage and dressing rooms; an orchestra rehearsal room (for more than 100 musicians); and large ensemble room (for 25 players). In addition, there will be a 200-seat black box theater. The student residence will have 252 student beds, a dining hall and a commons area.

Construction of the center began in May 2015, and a temporary occupancy permit is expected in April 2017. The building will be fully occupied with students in August 2017. The SLPC will open in the fall of 2017, coinciding with the celebration of the Conservatory's 150th anniversary.

The full dollar amount of the project is $85 million, with monies coming from a combination of fundraising and tax exempt borrowing. The contract was awarded to Tishman Construction Corporation, under the direction of James Anderson.

The design was by Ann Beha Architects and Gensler Boston. Beha's firm, which is headquartered in Boston, also steered the restoration of NEC's historic Jordan Hall from 1994 to 1995, receiving numerous awards for historic preservation and illumination.

Tishman previously executed the $21 million exterior renovations of the Conservatory's four buildings from 2009 to 2010, winning numerous awards for historic preservation and green initiatives.

“The building and its new streetscape should welcome students, their families and faculty and the greater and passionate musical community, to NEC,” said Beha. “Architecturally, this means creating spaces where performance and practice and daily life are kindred spirits; where learning, relaxation and community are well supported; and where design excellence sets a standard. Our pleasure has been designing a building that is both home and workplace, incorporating acoustic excellence, sustainability, and construction quality; pragmatic, but dynamic in its design expression and its functions.”

Several challenges with the project were noted by Ed Lesser, SVP of finance and operations and CFO of the NEC, including the small urban footprint of 10,000 sq. ft. (929 sq m); regulatory hurdles created by the project area being surrounded by historic buildings; the fact that the building is located on the Boston (Back Bay) landfill; the high water table; and addressing full programmatic requirements.

Lesser noted that the project is unique for several reasons, including its high end technical infrastructure; the façade of terra cotta tiles; the fully flexible, technology equipped theater space; and the fact that it is being done in conjunction with a federal earmark for renovating the streetscape surrounding the building.

Following a six-year planning process, the NEC Board voted to begin construction of the new center on Feb. 25, 2015. The project is the Conservatory's first new construction since 1959.

A groundbreaking ceremony was held on May 5, 2015, including board members, donors, faculty, staff, students, government leaders and arts leaders. Symbolic shovels of sand were included, along with speeches that paid tribute to the many people who had supported the project from its inception and musical selections from NEC brass and jazz.

Several unique features can be found throughout the area. To enhance illumination inside and allow visibility of interior activities from the street, the SLPC will feature numerous glass surfaces on the lower levels, including a prow-like extension of the Orchestra Rehearsal Room.

Inside, a notable highlight will be the Opera Studio/Black Box Theatre, a performing space that can be arranged in a variety of configurations for a variety of musical genres.

The new two-level library will re-integrate the Conservatory's audio resources and its collection of printed material, which are now housed in separate locations. The Dining Commons, for which there will be public access, will not only offer places to eat, but also a venue for small ensemble performances. The streetscape will also be improved with the addition of plantings, benches and trees.

“Having everything in one place will be a wonderful way to bring people together,” said student violinist Robyn Bollinger. “Being able to practice, rehearse and relax will be so much easier. One can go back and forth quickly. You can take some down time and then jump back in. It will offer a great benefit for the health and happiness of the student body.”

NEC is recognized worldwide as a leader among music schools. Located in Boston, Mass., on the Avenue of the Arts in the Fenway Cultural District, NEC offers rigorous training in an intimate, nurturing community to undergraduate, graduate and post-graduate music students from around the world. Its faculty of 225 boasts internationally esteemed artist-teachers and scholars. NEC alumni go on to fill orchestra chairs, concert hall stages, jazz clubs, recording studios and arts management positions worldwide. Half of the Boston Symphony Orchestra is composed of NEC-trained musicians and faculty.

NEC is the oldest independent school of music in the United States. Founded in 1867 by Eben Tourjee, an American music educator, choral conductor and organist, its curriculum is remarkable for its wide range of styles and traditions.

Through its Preparatory School, School of Continuing Education and Community Programs and Partnerships Program, the Conservatory provides training and performance opportunities for children, pre-college students and adults. Through its outreach projects, it allows young musicians to engage with non-traditional audiences in schools, hospitals and nursing homes. Currently more than 750 young artists from 46 states and 39 foreign countries attend NEC on the college level; 1,400 young students attend on the Preparatory level; and 325 adults participate in the Continuing Education program.

The only conservatory in the United States designated a National Historic Landmark, NEC presents more than 900 free concerts each year. Many of these take place in Jordan Hall (which shares National Historic Landmark status with the school), world-renowned for its superb acoustics and beautifully restored interior. In addition to Jordan Hall, more than a dozen performance spaces of various sizes and configurations are utilized to meet the requirements of the unique range of music performed at NEC, from solo recitals to chamber music to orchestral programs to big band jazz, Contemporary Improvisation, and opera scenes. Every year, NEC's opera studies department also presents two fully staged opera productions at the Cutler Majestic Theatre or Paramount Center in Boston, and a semi-staged performance in Jordan Hall. CEG