The project included the reconstruction of the entrance road to the airport terminal. 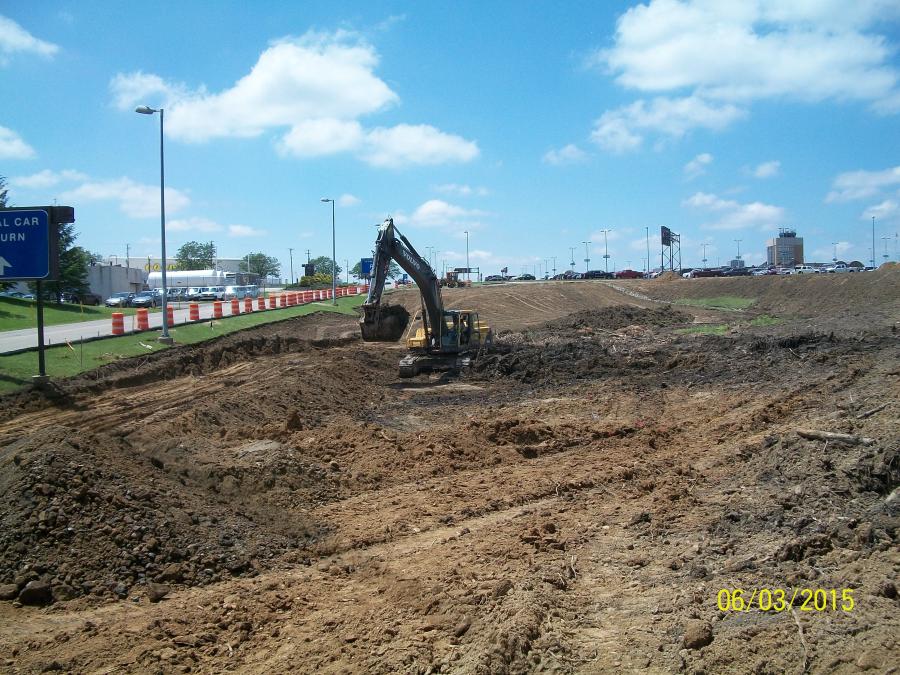 The project included the reconstruction of the entrance road to the airport terminal, reconfigured and improved short and long-term parking lots, a new rental car lot and the final phase — a new covered parking area, which is ongoing now. New entrance and exit plazas were constructed by the St. Clair/Paulis Group.

“A main goal was to give passengers more time to determine where they needed to go — whether it is long-term parking, short-term parking or the terminal to drop off someone” said Rick McQueen, president and CEO of the airport. “We also needed to add commercial lanes in front of the terminal to reduce congestion during peak times. Another important part of the project was to add a new rental car lot that is larger than the existing lot. This will free up space for a future terminal expansion.”

The airport, which was built 70 years ago, served 1.5 million passengers in 2015. While the road project was being built, an expansion and renovation of the ticket concourse also was under construction. This project was completed in May and was constructed by Cavanaugh Building Corp., Abbot Electric, Imperial Mechanical, and S.A. Comunale Co. The airport is planning a major terminal gate replacement project that is expected to start in mid-2017.

The tender process for the contract has not begun yet as the planning is still ongoing.

The project was designed by Hammontree & Associates.

“There have not been any design issues,” said McQueen. “It was well thought out and planned in conjunction with how it would work with everything else that is being planned for the airport's expansion and future needs. The goal is to improve customer service and convenience. The project is going according to plan and schedule.”

Major construction at an airport is never easy in terms of traffic.

“We've done as much as we can to alleviate any of the issues with congestion from the construction,” said McQueen. “We have a lot of temporary signage to help guide passengers and those visiting the airport.”

Bryan Shaw, the general manager of Northstar, a division of the Wenger Companies, said that while this has been a straightforward construction project, there have still been challenges.

“The work started with earthwork and a lot of demolition. Most of the storm drainage was replaced, along with some sanitary sewers and waterlines. The project included water quality structures as part of the drainage systems, where surface water runoff is treated in huge sand filters, was quite a bit of work and quite involved.

“We had to do all of that before we ever moved on to the surface work — curbing, asphalt paving, etc.,” he said. “What made it really difficult was maintaining access to the terminal. We had to provide adequate parking and pedestrian access to the front of the terminal, including two primary access points. The project was divided into five phases and 31 sub-phases and it was jig-saw puzzle from the start.”

The hard work by Northstar has paid off as it is two-and-a-half months ahead of schedule on the site development work. The covering for the parking is being installed by Fabristructure, a specialty subcontractor.

Shaw credits the pre-planning for the early completion of the site development work.

“It was a pretty comprehensive set of plans and we familiarized ourselves with them as best we could with the intentions of phasing the work,” he said. “We also found some better ways to proceed to be more efficient. At times we were able to combine some phases and still maintain access requirements that the airport had. We partnered well with the airport and the engineer — they were very accommodating with us.”

Shaw realized that his project would have an impact on a terminal expansion project that was ongoing at the time.

“We coordinated with the other contractor who was working right in front of the terminal,” he said. “We also had nearly 12 subcontractors on our project, so there was quite a bit of coordination. Our project manager, Walt Neff, did a great job coordinating all of that. Mike Dimmerling, our project superintendent, did a fabulous job in keeping everybody informed and making sure that there weren't any issues and keeping the patrons happy.”

At peak times there were nearly 50 workers on site —30 from Northstar and 20 via subcontractors. All the work was done via day shifts. The subcontractors included RMI Cement LLC and Graco Concrete Inc. for cement, the Hilscher-Clarke Electric Company for electrical, and Wenger Excavating for excavation.

“We have a drum-mix asphalt plant two miles away from the job site and we produce out own aggregates at a plant 10 miles away,” said Shaw. “We're in a unique position because of our close proximity to the airport. One of my first jobs with Northstar was the original re-working of the outer ring road in 1989. I'm full circle now. We've done extensive work continuously on the airfield, including runways, taxiways, and surface upgrades and since 2009, we've been here consistently. In fact, we have another taxiway job that we're going to do once the FAA funding is in place.

The work site was tight and there was limited room to store materials. This required coordinated material deliveries for each phase of the construction.

“But as the job progressed,” said Shaw, “we had more real estate to utilize for staging. There were very few surprises in terms of the work. Occasionally you would run into things that nobody knew about — an old utility line or something else, but that was very well managed and nothing serious came up that curtailed construction.”

Mechanics, using repair trucks based at Northstar's main office/yard in North Canton visited the site as needed. If repairs could not be done on site, bringing them to the shop was an easy process.

“We didn't bring in anything large enough that was in pieces and had to be assembled on the job,” said Shaw. “Most of it was mobile and could be trailered. The mechanics covered routine maintenance at night. Where we could, we had back-up pieces of equipment in case something needed to be serviced. We couldn't afford to take too much equipment out of service in order to maintain the schedule.”

Neff and Dimmerling will definitely be applying lessons learned on this project and future projects.

“Considering the five phases divided into 31 sub-phases, pre-planning is most essential,” said Neff. “However, even the best of plans and schedules must have a small amount of flexibility.”

Dimmerling said, “Flexibility coupled with adaptability is the key to success in difficult situations.”