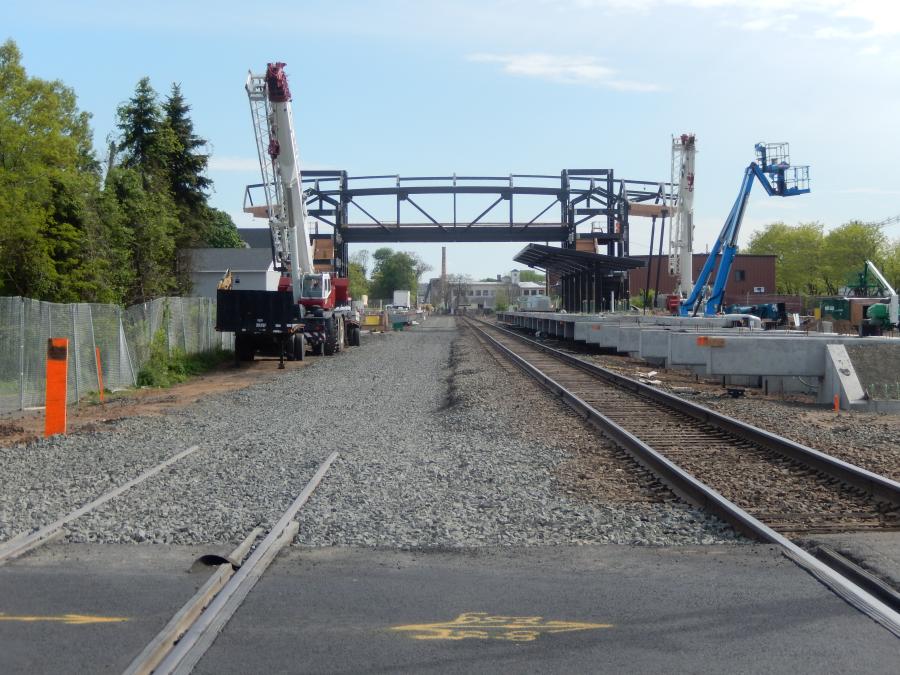 Construction continues on the overhead pedestrian bridge at the Wallingford Station. (Connecticut Department of Transportation photo)

In a move to dramatically increase passenger rail service, work continues in Connecticut on the CTrail Hartford Line. Scheduled to launch in January 2018, the New Haven-Hartford-Springfield rail program is taking advantage of a state-of-the-art track construction machine (TCM), which is currently being used to double-track portions of the line.

“The TCM is the main component of a moving assembly line designed to install rails and ties in one efficient operation,” said assistant CTDOT rail administrator John Bernick. “Prior to start of the operation, train cars carrying fifty, 1,600-foot long rails were off-loaded and laid end-to-end on either side of the rail bed. Fifteen tie cars, each carrying 176 concrete railroad ties weighing over 800 pounds each, are towed behind the TCM.

“A mobile gantry runs back and forth along the tie cars picking up ties in bundles of eight and feeding them into the TCM via a conveyor system. While pulled along the rail bed by a bulldozer, the TCM uniformly lays the ties onto the ballast at predetermined spacing and simultaneously threads the rails onto the ties. A clipping machine attaches the rail clips to hold the completed track assembly together. The machine can assemble up to 1,000 ft. (304.8 m) of track per hour in ideal conditions, at roughly one mile of track per day.”

Prior to the use of the TCM, it would have taken months to complete the work, using either track panels, which require offsite assembly and transportation to the site, or manual installation through the use of other, more traditional track construction equipment. Amtrak contracted with Harsco Corporation to secure the equipment and staff to perform this operation. The massive TCM was moved from its previous job on the Hudson Line in New York via freight service to the job site in Connecticut.

“Considering this is the first time this operation has been conducted in Connecticut, it's very exciting,” said Bernick.

Because the TCM can lay track without disrupting train operations on adjacent tracks, Bernick called it a win for everyone. There was some initial apprehension, recognizing this is the first time a TCM has been used to lay such a significant length of track in Connecticut.

“Anytime you try something new, there are always risks that threaten success,” said Bernick. “The key to mitigating these risks is proper planning. Planning for this activity started [more than] three years ago while we were designing the project.”

The work of the TCM is progressing on schedule, with no major mechanical or operational issues encountered, to date.

According to Bernick, Amtrak maintained two tracks on this line until the 1980s, when they removed little-used sections of the second track to reduce maintenance costs. The NHHS rail program is replacing the second track; however, current Amtrak standards, the existing condition of the line and the need to meet increase speed requirements made this a difficult challenge.

More than 40 culverts and bridges needed to be repaired, extended or replaced and retaining walls were required to reduce impacts to adjacent property owners and environmentally sensitive areas.

To minimize the duration of construction, multiple and simultaneous construction activities are being undertaken along the 62 mi. (100 km) corridor. Access to the rail line is limited. In addition to at-grade crossing, there are roughly 30 access points along the corridor. Moving material and equipment to and through the corridor required a detailed plan for staging construction.

Bernick remarked, “Successfully delivering a program of this magnitude requires a keen focus on the foundational elements of any major program — scope, schedule and budget. To facilitate this, we established clear definitions of roles, responsibilities and communications protocols, and we follow that up with regular monitoring and reporting on activities so that all parties to the program work collaboratively and cohesively. We began this process by forming a program team consisting of CTDOT and Amtrak personnel, both of which are supported by appropriate consultant program management, design and construction management professionals.

“This structure was implemented at the inception of the program and has evolved to address the needs during the planning, design, construction and operational phases. CTDOT benefits from the support and leadership of Gov. Dannel Malloy, the long standing commitment from Commissioner James Redeker, the dedicated staff at CTDOT and a highly experienced team of contractors, who are passionate about implementing this critical new service for Connecticut and the region.”

Since the completion of the TCM operation to Milepost 15.1 in Wallingford, Amtrak has been flooding the new track with ballast using Herzog leased ballast cars and the Amtrak fleet of ballast cars. The surfacing crew will follow and will raise and tamp the track with a Dynacat tamping machine.

“The schedule for this program is aggressive. The mild 2015/16 winter allowed us to continue with construction through the winter with fewer weather-related disruptions than we had planned. Looking ahead, we are planning for inclement weather in our schedule, but will be prepared to take advantage of another mild winter, should we be so fortunate.”

Construction began in the fall of 2012, with the installation of 59 mi. (95 km) of underground signal and communication cables between Hamden, Conn., and Springfield, Mass., to support existing and future signal and communication equipment, as well as Amtrak's implementation of Positive Train Control. The existing signal and communication cables were located in the footprint of the proposed second track. This advanced project was implemented so that new cables could be installed parallel to and along the outside of the tracks, allowing crews to remove the old cables and leave a clear roadbed onto which they could reinstall the second track. The project was completed in fall 2015.

At Hartford Union Station, a new 260-ft. (79.2 m) long, high-level platform was installed over the existing low-level platform. This installation — with new passenger information display systems and security cameras — was completed in spring 2016.

Construction of track and track support structures began in summer 2015. Improvements such as new drainage systems, bridge and culvert repairs, upgrading of signal systems and roadway improvements at grade crossings are included in this work.

As of Sept. 2016, preparation of the rail bed has been completed for 13 of the 23 mi. (21 of 37 km) of second track. In addition, four of the seven bridge improvements and three of the five interlockings have been completed. By the end of 2016, 11.5 mi. (18.5 km) of second track will be installed using both the TCM and other conventional means of construction.

Construction of the new CTrail Hartford Line stations in Wallingford, Meriden and Berlin was initiated in the fall 2015. Construction of these stations generally includes the installation of 500-ft. (152.4 m) long, high-level platforms with automatic snowmelt systems, an overhead pedestrian bridge, passenger information display systems, ticket vending machines and parking for approximately 200 cars. Station elements will be completed in spring 2017.

Bernick said the project is roughly 50 percent complete. Next spring, the TCM will return to lay another 9 mi. (14.5 km) of track in Berlin and Newington. In anticipation of this, Amtrak and its contractors continue to prepare track bed, improve bridges and culverts and install retaining walls along the corridor.

At the stations, the work remaining includes completion of the automatic snowmelt system, which consists of a series of pipes embedded in the concrete platform and connected to heat exchangers through which heated glycol is pumped. This system will keep platforms clear of snow and ice without having to deploy limited personnel resources. Other reaming work includes completion of brickwork, windows, elevators and parking lots, as well as amenities such as signage, ticket vending machines and passenger information displays.

Bernick said challenges for any major capital program include coordinating the technical aspects of the work, managing public and stakeholder input, and delivering the program on schedule and within budget.

“The NHHS rail program is no different; however, in addition to these typical challenges, it came with its own unique complexities. Unlike most of our projects that occur on Connecticut Department of Transportation property, the right-of-way on which the program is being built is owned by Amtrak. As grantee for the program, CTDOT is responsible for all requirements of the grants, including schedule and budget.

“Since Amtrak owns the right-of-way, it has its own set of standards for design and operation. There were a number of disagreements along the way, but together with Amtrak and the Federal Railroad Administration, we reached the compromises necessary to make this program a success. An example of this commitment to success is Amtrak Deputy Chief Engineer of Track's personal participation in monthly design workshops. This level of engagement by Amtrak was critical to achieving consensus on complex design issues and resulted in a program that meets all grant requirements, while staying true to Amtrak's standards,” he said.

While it will take three years to construct this program, planning and design were the most time-consuming efforts.

“The best example of this involves the unique materials and equipment necessary for railroad construction projects. Early planning was important to identifying these elements and initiating their procurement to ensure their transportation and arrival to the project on schedule. While plans were being developed, procurement of these long-lead items was initiated as soon as types and quantities were established.

“The increased emphasis on rail transit across the country heightened the demand for these limited resources. Preparing designs early and getting into the queue with the limited number of manufacturers and suppliers was a time-consuming, yet critical, effort to the success of the program.”

Once completed, the program will provide significant new regional passenger rail service options as a key component of a strong multi-modal regional transportation system. With funding from the new high-speed intercity rail program created by President Obama in 2009, and the state of Connecticut, the NHHS rail program will provide the infrastructure and trains to operate some of the nation's best passenger rail service. As the gateway to New England, the NHHS rail program also will facilitate improved service to Massachusetts, Vermont and eventually Montreal.

New train service will connect communities, reportedly generate sustainable economic growth and help build energy independence. It will provide travelers with a fast, safe and reliable public transportation alternative to the congestion all too familiar during rush hour.

Officials have stated that the Hartford Line also will become a catalyst for transit-oriented development around stations throughout the state. Hartford Line rail service will encourage compact, mixed-use development within one-quarter mile of stations, and is expected to connect individuals to job opportunities, housing, retail and entertainment destinations.

At last report, the program was funded for $640 million in state and federal funds for work from New Haven to Hartford. The remaining $517 million includes track work from Windsor to Springfield, upgrades to existing stations in Windsor and Windsor Locks, along with new stations in North Haven, Newington, West Hartford and Enfield.

“We are excited to finally launch commuter rail service between New Haven, Hartford and our friends in Springfield, and state-of-the-art, 21st-Century machinery like this is helping keep us on schedule so we can begin service as soon as possible,” Malloy said. “A modernized transportation system brings so many benefits to an area. High among them are the economic advantages that attract businesses and grows jobs, however for too many decades our state lacked the forward-thinking vision to make these improvements.”

Commissioner Redeker is equally committed to the project, and looks forward to its completion.

“Launch of the Hartford Line will provide an opportunity for Connecticut to join in a regional vision to make rail a more convenient and faster option for travelers. Expanded rail service will strengthen transportation infrastructure in Connecticut and the region.” CEG