The new bridge will reduce congestion and improve safety with extended ramp deceleration lane across the bridge. 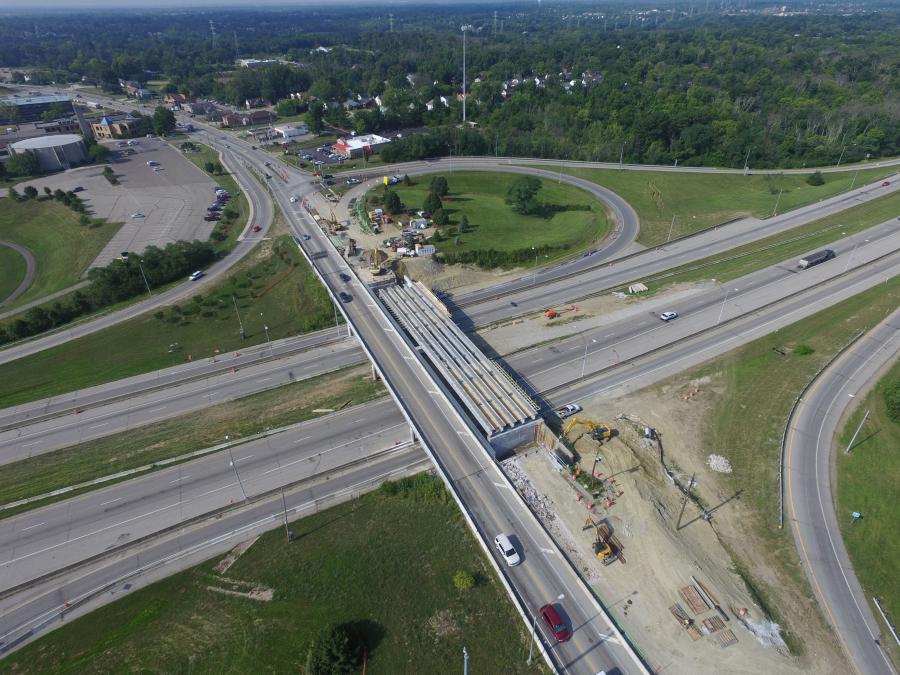 The $8.2 million Ohio Department of Transportation’s (ODOT) North Bend Road Bridge replacement in Cincinnati began on April 18 when crews from the Sunesis Construction Co. arrived on the scene for the project that will be completed in August 2017.

The $8.2 million Ohio Department of Transportation's (ODOT) North Bend Road Bridge replacement in Cincinnati began on April 18 when crews from the Sunesis Construction Co. arrived on the scene for the project that will be completed in August 2017.

The bridge is located between West Fork and Boomer roads in Green Township. The project is part of an I-74 rehabilitation project and includes resurfacing the pavement on I-74 and the ramps at this interchange, repair a slope failure along the shoulder of the exit ramp from westbound I-74 to North Bend Road to stabilize it, and wider sidewalks on the bridge.

“The new bridge will reduce congestion and improve safety with extended ramp deceleration lane across the bridge,” said Brian Cunningham, a communications manager of ODOT, “and provide an improved route toward Cincinnati for oversized loads.”

The work is divided into two phases, with Phase 1 ending in the fall 2016, which will maintain one lane in each direction and a walkway on one side of North Bend Road over I-74 to be open to pedestrians as the southbound side of the bridge is rebuilt and Phase 2 — winter 2016 through the summer, with two southbound lanes and one northbound lane open to traffic and the walkway on North Bend Road over I-74 to be closed to pedestrians for approximately six months. The work will concentrate on the new northbound side.

Maintaining traffic is an important part of the project, and this will be done by using temporary roads, lane shifts and posted detours. Arrow boards and signs are being used to alert motorists of work zone and traffic restrictions. Ensuring the safety of the construction workers, motorists and pedestrians is a priority for ODOT. The current bridge carries 3,500 vehicles daily. The new bridge, with two lanes in each direction and a southbound ramp lane, will be able to carry 3,700 vehicles daily.

Built in 1969, the bridge has reached the end of its lifespan and is deteriorating. More than 54,000 vehicles use this section of the I-74 daily.

Cunningham said that vertical clearance on I-74 will rise from 14.5 ft. (4.4 m) to nearly 17 ft. (5 m) so that will be able to handle large loads carried by many trucks today. The work also addresses a problem created by an incident when a truck hit the bridge and bent a steel beam.

“The planning started in the winter of 2012 and completed in 2015,” he said. “We didn't receive any concerns and the general feeling was that an improved bridge was needed to meet local needs. Structurally there are no issues with design, but the recent opening of a nearby hospital required an adjustment to the maintenance of traffic operations. The key was to ensure that ambulances could reach the emergency room rapidly and meetings with representatives from ODOT, the hospital, Green Township, and the Hamilton County Engineers Office resolved the issues.”

Cunningham said the expected lifespan of the bridge could be as much as 100 years with proper maintenance due to the use of pre-stressed concrete beams.

“We normally get 50 to 60 years of life for our bridge decks before they get replaced, but we've been adding migrating corrosion inhibitors, micro-fibers and micro-silica to the concrete decks that could give up to a 100-year lifespan.”

The new bridge was designed by Carpenter Marty Transportation Inc.

Green Township is participating in the project and is installing a vandal-proof protection fence, with artistic features and the township's name, to serve as an entryway into the community. The features include signs identifying the township with leaves and decorated light fixtures.

Matt Ventura, Sunesis's senior project manager, is leaving nothing to chance on this project, which has all the elements involved in a major initiative. There are two crews working simultaneously — one on the road work and another for the bridge work.

“One milestone is to have the road completely open to traffic,” he said. “It's a very busy area and the traffic really complicates things. Some of the work is done at night to lessen the impact. Coordinating everything and scheduling to be ahead of time can be daunting.”

The work will be year-round, with an average of 12 Sunesis staff on site daily, and several subcontractor employees when Rod Techs has crews present for installing the reinforcing steel, Elex has crews installing signal and electrical items of work, Security Fence is installing the vandal protection fence and guardrail items and John R. Jurgensen will be performing the asphalt paving.

“They're raising the bridge and surrounding grades by several feet which requires fill,” he said. “There's a large portion of aggregate that is needed and we're recycling the dirt and concrete. The materials are being staged at different locations and we're bringing it in as we need it.”

The bridge work requires night work and a successful demolition plan has been established, which starts with the deck removed via sections of slabs (saw cut from the girders) and implementing lane shifts and exit ramp closures on I-74 for several hours at night. A total effort has been put in place to prevent debris from falling onto the road but much of the demolition work requires temporary Interstate closures for 15-minute segments in order to safely perform the demolition and erection work.

“People will typically take the exit ramps to North Bend and then re-enter the highway to avoid the closures.” said Ventura. The new bridge superstructure consists of pre-stressed concrete I-Beams with a concrete deck cast on top of them. From the time we mobilized to the site, implemented the temporary roads to maintain traffic and remove the west side of the existing bridge, we were eight weeks into the job. The traffic protection measures — using 4 x 4 plywood has been installed and it will prevent anything from going on the highway while we are working on the deck. We're currently building the temporary MSE walls to contain the backfill for phase 1 of the project. The temporary MSE walls allow us to backfill phase 1 to plan elevations without having the entire abutment built. The second half of the abutment will be constructed in phase 2 at which point the temporary MSE wall will be encapsulated with the fill required to meet the plan grades in this phase.

“This project is a little unique because there are so many different entities involved with it,” he said. “Hamilton County, Green Township, Mercy Hospital, and the St. Ignatius Loyola Parish have all been involved in the discussions regarding preplanning and construction.

For this project, Sunesis is excavating using a Kobelco 210 and a Kobelco 330, a 55-ton Link-Belt 8060 rough terrain crane, a Bomag roller and a Case 621 wheel loader.

The company's nearest shop/yard is 40 minutes away and mechanics are brought in as needed for daily wear and tear issues and routine maintenance.

“The rock is really shallow on this project and it shows up everywhere,” said Ventura. “As far as maintenance goes, it's pretty routine stuff and there are no real challenges regarding maintenance. When we're working nights, we have a mechanic on call.”

The work site is tight and there is no room for Sunesis to set up a field office. However, good community relations are really helping to ease this issue and secure help.

“The Mumford/White Oaks Community Association adopted the exit ramps and through a beautification program added signage and landscaping — planting trees donated by the community to green the area and serve as memorials,” said Ventura. “We met with them and came to an understanding. They are very good to work with and we dug up some of the trees in hopes to replant them.

“The planning and coordination does not stop with traffic,” he said. “St. Ignatius Parish is allowing us to stage in their parking lot. Part of the terms is for us to vacate the lot for their upcoming festival and we started moving some of our equipment and barrels. The area will be cleared in time.”

Aside from use of the parking lot, Sunesis is essentially restricted to the rights-of-way and as mentioned, is being careful to minimize the impact on them.

“We're tip-toeing around them,” said Ventura. “Materials deliveries are scheduled for on-time use. The support we have received from the community is appreciated.”