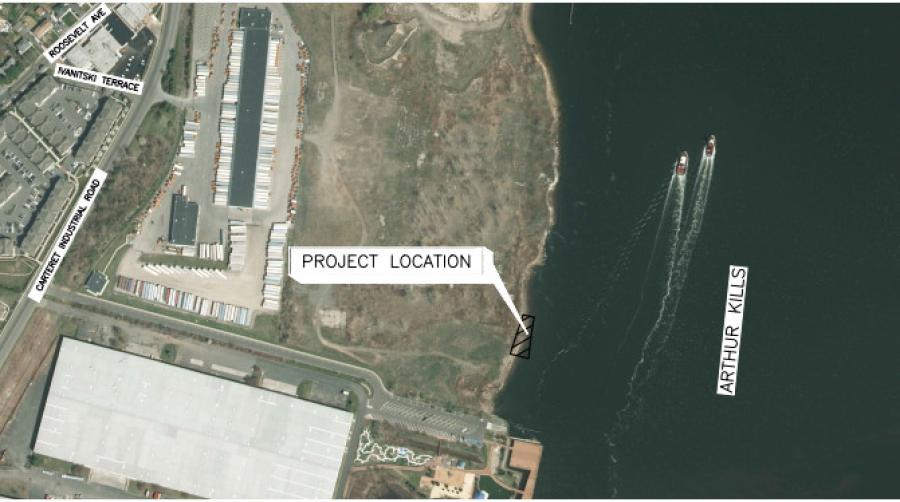 Carteret awarded a bid June 16 to Agate Construction, from nearby Clemont, to build Phase 1 of the Carteret Ferry Terminal. The work involves bulkhead installation, including 131 lin. ft. of permanent sheeting "bulkhead" with a steel cap and aluminum gangway, the Middlesex County borough announced in a news release.

When the initial phase is done, it will clear the way for major construction to follow on Carteret's ferry terminal along the Arthur Kill waterway, a tidal strait that separates the town from New York City's Staten Island.

Upon completion of this bulkhead, the New Jersey Department of Transportation's (NJDOT) Office of Maritime Resources will begin dredging approximately 19,500 cu. yds. of material later this summer, followed by the borough's construction of waterside and landside improvements.

"We are excited to get started on the first phase of the Carteret Ferry Terminal," Mayor Dan Reiman said in the statement. "We have worked tirelessly to bring ferry service to Carteret so our residents and commuters around the region can have a more direct and efficient route to downtown Manhattan and the Financial District."

"Diversifying and expanding our transportation network with this ferry service is crucial to transforming life for Carteret residents and those in surrounding communities, whose contributions are important in sustaining our nation's most economically productive region here in the Northeast," he said in a statement.

"With partnership spanning the federal, state, county and city levels, it is a great to see this project get past its final hurdle. Soon residents, local businesses and the regional economy will be reaping the benefits of this investment thanks to Mayor Reiman's vision."

To fund the project, Reiman's administration has brought in more than $30 million in grants from the federal and state governments to build the Carteret Ferry Terminal.

The ferry will provide reliable, significantly quicker and more environmentally friendly transportation service to New York City — cutting travel times to Manhattan to under an hour — while reducing traffic congestion on the New Jersey Turnpike and approaches to the Holland and Lincoln Tunnels by getting more commuters out of their cars, the borough noted.

The Middlesex County Board of County Commissioners has supported and partnered with the community in its efforts to bring ferry service to Carteret.

"The [board] is pleased to be working with Carteret to realize its vision of building a state-of-the-art ferry terminal," said Ron Rios, director of the board, and a Carteret resident. "Adding this terminal will make Middlesex County one of the most connected regions in New Jersey, accessible by train, bus, highways, and soon, by water."

Added benefits of the ferry include:

"Carteret is quickly becoming one of the most desired locations for commuters to call home," Reiman said in the statement. "New residential and commercial opportunities, combined with our future ferry service, a newly constructed Performing Arts and Events Center, upgraded parks and stable tax rates solidify Carteret as a great place to live, work and raise a family."

The Carteret Ferry Terminal is part of a larger effort to turn the community's waterfront into a popular regional destination, which now includes a fishing pier on Arthur Kill, a public park, 185-slip marina, a future events center at the park, and a two-mi.-long riverwalk funded through a grant from the New Jersey Department of Environmental Protection's (NJDEP) Office of Natural Resource Restoration.

According to Reiman, the nearly 2 mi. of public access along Carteret's eastern shoreline, including its ferry, marina and riverwalk is quite a feat for a community that had no public access to the waterfront for over 100 years.

"While all permits are now in place and necessary funding has been secured for two ferry boats, we will continue to seek out additional funding for the intermodal terminal building itself, which would be the next phase of this project," he added.