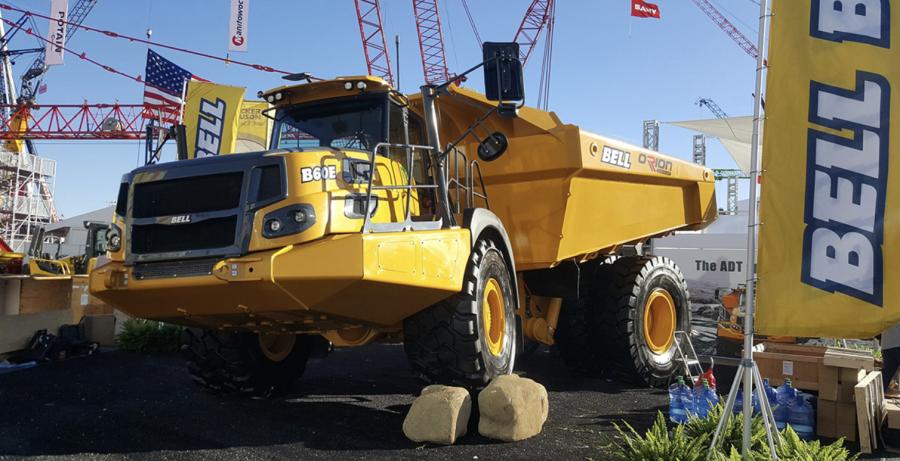 Bell Trucks B60E 4×4 crossover was a key feature at ConExpo-Con/AGG.

ConExpo-Con/AGG 2017 provided an opportune platform for global Articulated Dump Truck specialist, Bell Equipment, to showcase its new E-series Large Truck range, introduced globally at the end of 2016 and represented at the show by the B45E and B60E models.

The five E-series Large Truck models – the B35E, B40E, B45E, B50E and the unique 4×4 crossover B60E – follow the culmination of three and a half years of development and testing. They effectively complete the E-series range that was launched four years ago with the smaller B25E and B30E offering.

Bell re-entered the American market under its own brand in 2012 and has since continually grown market share. “Customers quickly saw the benefit that focused engineering brings to our trucks. North America, and the USA in particular, is a key market for ADTs and we are excited about the success we have had in such a short time after coming back. With our North American sales continually growing, studies have commenced with regards to setting up manufacturing in the USA. Building closer to market allows for better flexibility and quicker response, and this again improves the customer experience,” comments Bell Equipment Group Chief Executive, Gary Bell.

Speaking about the E-series Large Trucks, Bell added: “At Bell we don't get to rely on our brand name. Our products need to perform and what we see with our E-series trucks are world class machines capable of taking on any of the competitors anywhere in the world.”

Importantly the E-series Large Truck program has achieved its main design goal of improving on the lowest cost per ton industry benchmark set by its D-series counterparts. Comparative testing between the B40E and the B40D revealed that, taking into account all variables, the B40E delivers up to 10% lower cost per ton to Bell customers than the B40D. “Similar improvements will be seen across the entire range and this will impact directly on our customers' profitability and ability to tender more competitively,” says Bell Equipment's Product Marketing Manager, Tristan du Pisanie.

Bell is particularly optimistic about its 45-toner in light of increased global demand for this truck size. With its rated payload of 45 tons, a bin volume of 33yd³ and a powerful new engine, the B45E has the potential to become the most popular model in the range due to its overall value proposition to customers.