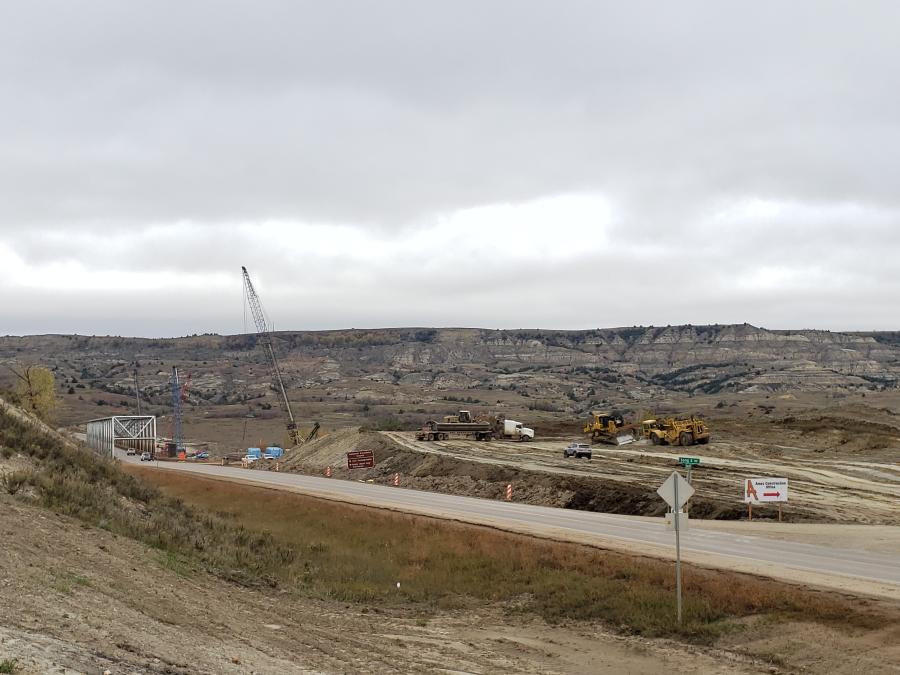 “The Long X Bridge has served the U.S. 85 corridor since 1959,” said Matt Linneman, project manager of NDDOT. “However, with the booming energy industry in the northwest part of North Dakota, and an increase in commercial truck traffic carrying large loads, the bridge has had at least six major hits.” (NDDOT photo)

The North Dakota Department of Transportation (NDDOT) is overseeing a $38.5 million project that will create a new Long X Bridge. Construction consists of bridge replacement, a wildlife crossing structure, grading and guardrail work. Motorists will continue to utilize the current Long X Bridge while the new structure is being built.

"The Long X Bridge has served the U.S. 85 corridor since 1959," said Matt Linneman, project manager of NDDOT. "However, with the booming energy industry in the northwest part of North Dakota, and an increase in commercial truck traffic carrying large loads, the bridge has had at least six major hits. 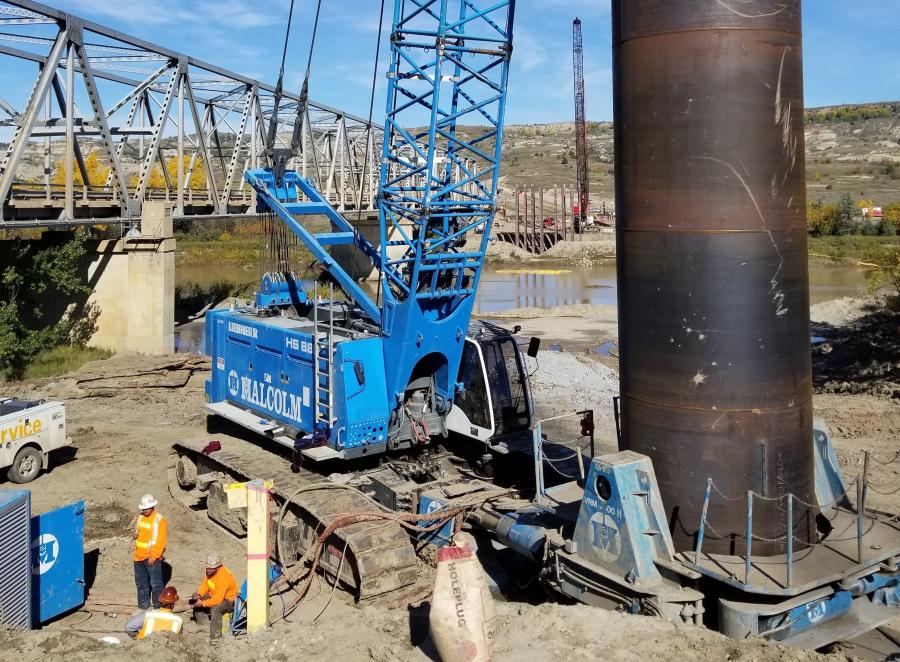 "The bridge simply cannot handle overheight or oversized loads. We have had to close the bridge on a number of occasions, resulting in long detour routes, as U.S. 85 and the Long X Bridge are the main routes for traffic."

Linneman said the work comes not a moment too soon.

"The Long X Bridge was the highest priority segment of the U.S. 85 corridor between I-94 and Watford City. The through-truss nature of the existing bridge limited many oversize industrial and agricultural loads from using the highway in that area."

Approximately 4,200 vehicles cross the bridge every day. Motorists seem ready for the change.

"During the public input process, most of the comments supported replacing the bridge. This was primarily due to the fact that most oversized loads have to be routed around the bridge, which can cause up to 50 miles of indirection. There also have been multiple bridge hits, which can cause the bridge to be closed for repairs. A closed bridge results in all traffic having up to 50 miles of indirection to get to their destination."

Linneman said that while funding has not yet been identified for construction of the remaining segments of U.S. 85, it's rewarding to see the Long X Bridge project moving forward. Environmental approval, funding and public support for the construction played a key role in bringing the project to life.

"NDDOT and Federal Highway Administration [FHWA] initiated an Environmental Impact Statement [EIS] in October 2015. The EIS identified needs; gathered public input; conducted preliminary engineer and studied alternatives; assessed impacts to natural, cultural and social resources; and resulted in a recommended improvement that was approved by FHWA in March of 2019. The project team worked closely with stakeholders and resource agencies to understand the needs and context of the area, and utilized flexible design options to minimize impact to the greatest extent possible." 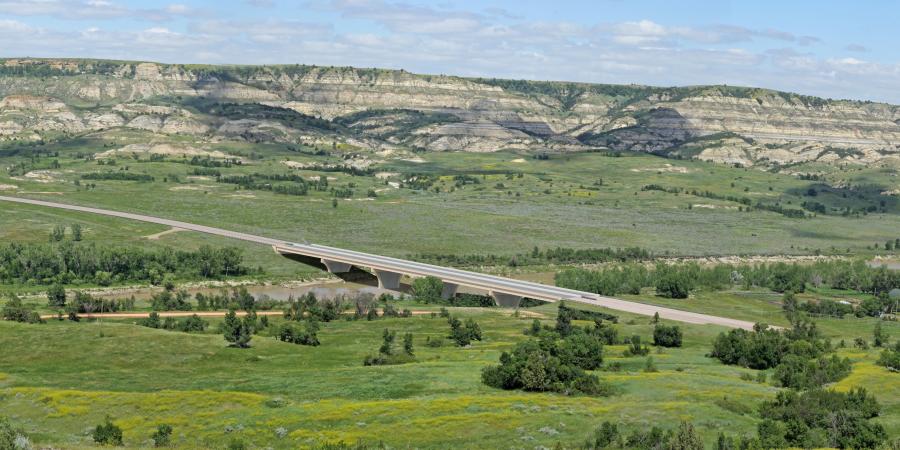 The existing Long X Bridge is a three-span, cantilevered, subdivided Warren through-truss built in 1959. It is 969 ft. long, with a clear roadway of 30 ft. and a vertical clearance of 16 ft. The new bridge is a five-span concrete I-girder. It will be almost 800-ft. long, with two 40-ft. clear roadways.

According to Dave Matheson, Ames Construction senior project manager, one of the biggest challenges on this project is the winter conditions North Dakota experiences.

"The cold weather and high winds present issues such as frozen ground that prevents construction crews from performing earthwork between mid-November and mid-April. In addition, any work over and in a river present additional challenges compared to traditional highway work. Bridge substructure work in a river involves working under river water levels. This necessitates the use of cofferdams, usually made from sheet piling, to place foundations and columns on firm ground underneath the bottom of the river.

"The month of September in 2019 provided many issues, due to unexpected amounts of precipitation, but wintertime always contributes difficult conditions, and some types of work are not possible during the winter months. Work that is not typically performed includes earthwork, as well as paving and painting, which are very temperature dependent."

Other work has to be modified and is less efficient in the winter months.

"An example of this is concrete placement. Concrete has to cure at temperatures above freezing, and work may need to be protected with insulation or external heat sources to meet quality standards. Although weather is a factor for construction in North Dakota, difficult conditions are expected and will be planned for." 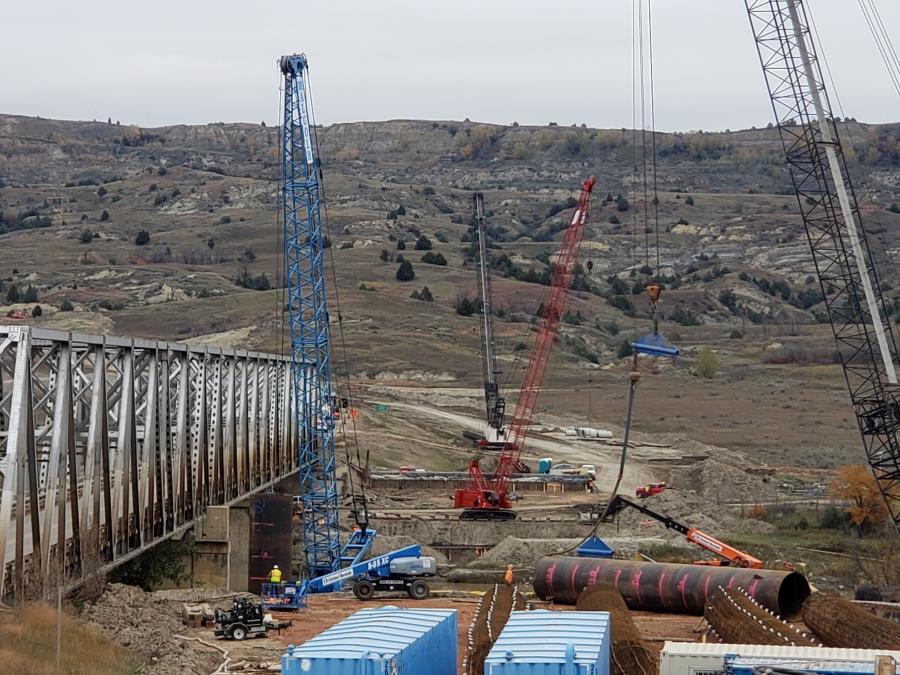 Matheson noted that access for construction necessitates temporary roads known as causeways to be constructed for access to work and for equipment.

Construction of these causeways has to be completed without permanent or detrimental impacts to the river.

A number of tasks have already been completed since work began in July, including initial clearing and grubbing and the removal of topsoil in August, when the first crews started on site.

"Earthwork tasks were performed on the south side of the bridge to construct the new alignment and temporary bypass to the new proposed grade. All seven drilled shafts on the south abutment were excavated and poured in October. A causeway was built into the river to allow sheet piling to be driven, creating two cofferdams where Piers 3 and 4 are to be built in the river. The H-piling and concrete foundations for Pier 3 and Pier 4 were constructed within the cofferdam.

"Abutment 6 and Pier 5 were successfully constructed on the northern side of the bridge. Asphalt paving was completed on the northern widening of the road and at the temporary shoofly, where the wildlife crossing will be constructed on the south side of the bridge next year. A berm was created to separate the job site from the adjacent landowner whose driveway access was moved from U.S. Highway 85 to Long X Road."

Workers are completing certain components of the bridge substructure in the Little Missouri River. The piers are being formed and poured in the cofferdams that were built at the bottom of the river. Water is continuously pumped out of the cofferdam while work is being completed inside.

Phase 2 earthwork is partially complete at this time. 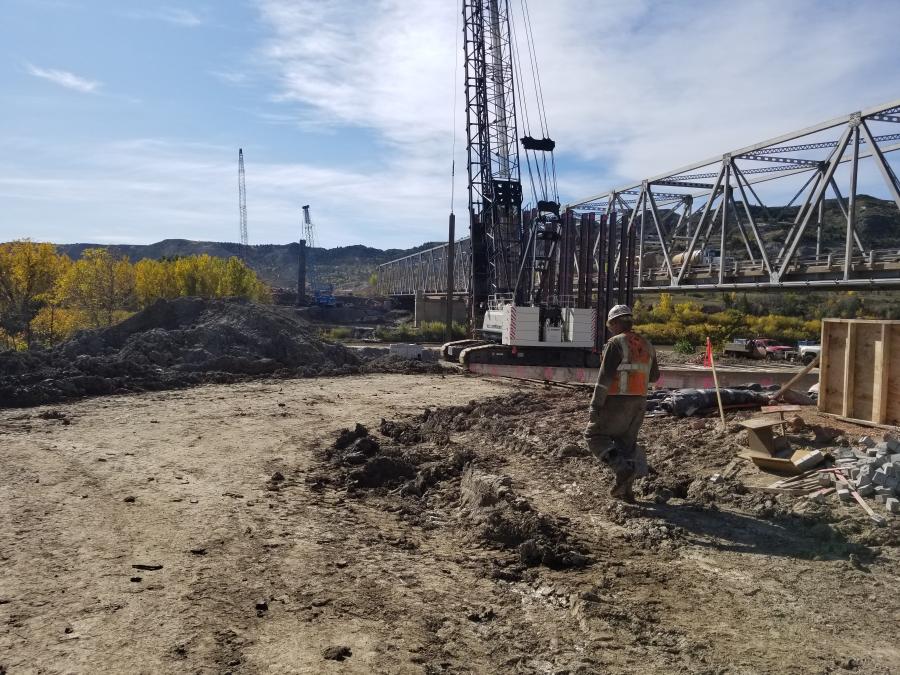 "The two main areas are the new alignment east of the current roadway alignment on the south side of the bridge. This area consists of roughly 80,000 cubic yards of earthwork, of which two thirds is complete. On the other side of the river, there's roughly 50,000 cubic yards of embankment, most of which remains to be completed in 2020. There will be some additional earthwork needed after the traffic is switched onto the new bridge to be completed in the spring of 2021."

In addition to the earthwork required for the roadway alignment, there is substantial structural excavation and backfilling in the bridge substructure and bridge approaches. The largest schedule milestones involved with this project are the completion of the substructure underneath of the bridge, placement of girders on top of substructure, asphalt paving on the new alignment approaching the new bridge, construction of a new wildlife crossing underpass, the opening of the new traffic alignment across the new bridge, the demolition of the existing bridge and the final grading of the areas around the existing Long X Bridge.

Matheson said the biggest concern when replacing a bridge or conducting any other construction activity is safety.

"A bridge is, by definition, an elevated surface over an obstacle, so the construction process inevitably includes dangerous heights and necessary fall protection is utilized to help ensure a safe work environment for everyone. The location of the bridge in North Dakota provides additional concern, as the cold winter will produce lots of snow and ice which will melt and create runoff in the spring, resulting in higher flows in the river. The location of the bridge — in close proximity to the Theodore Roosevelt National Park — also presents some concern, as the workers must be aware and mindful of the wildlife found in the area."

Matheson explained that the main component of the project is the new bridge over the Little Missouri River.

"The new bridge will be 790 feet long and 85 feet wide. The five-span bridge is on a foundation of driven H-piles in the piers on the north abutment and drilled concrete caissons on the south abutment. Cast-in-place concrete piers will support 60 precast concrete girders, which will support a cast in place concrete bridge deck.

In addition to the bridge, the project has a new underpass crossing on the south side of the structure that will allow for safer migration of wildlife. 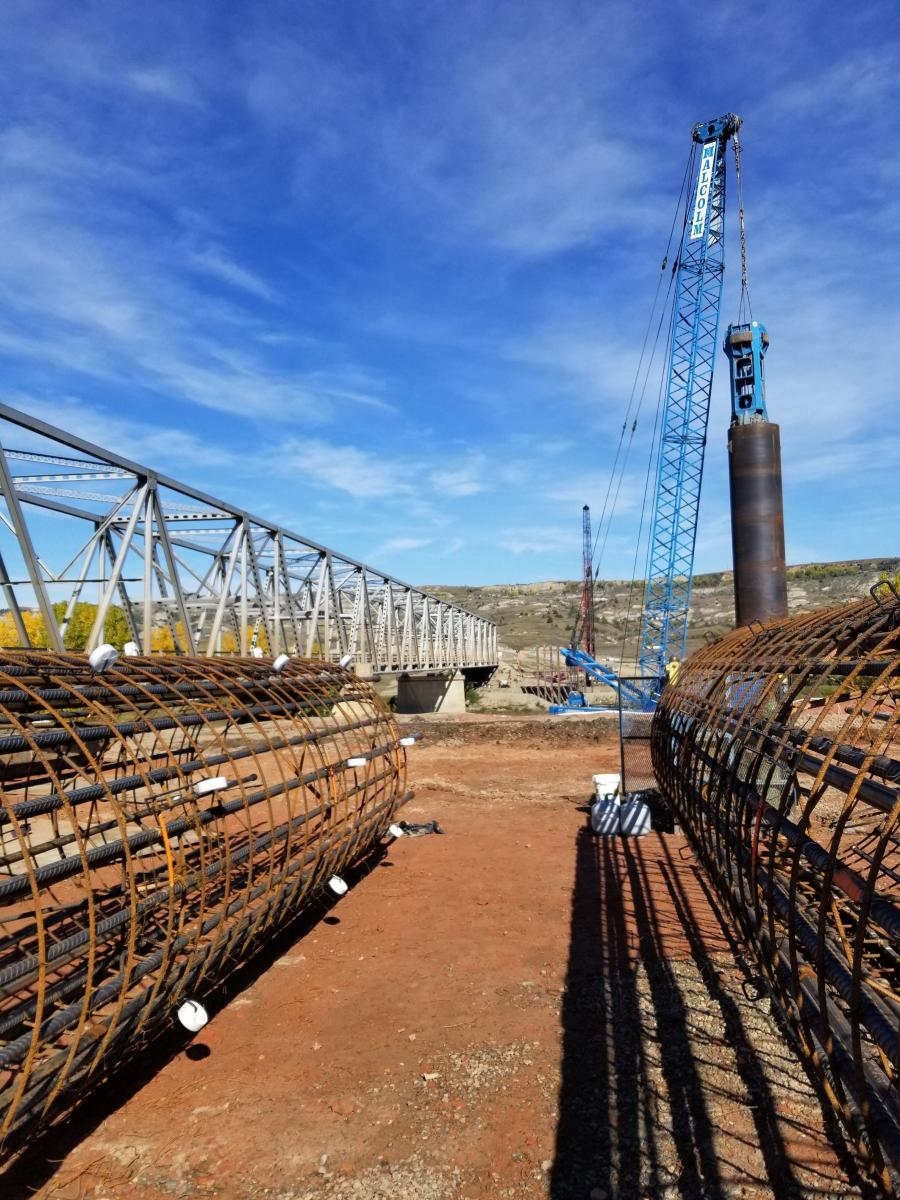 Matheson added that the overall duration of the project is mainly driven by the construction of the new bridge.

The deck soffit will need to be formed in lumber and plywood to provide formwork for the concrete deck. After the deck is poured and has cured, bridge rail will be poured on top of the deck prior to opening the new bridge to traffic toward the end of 2020." CEG