There’s a lot to explore within the Oklahoma Department of Transportation’s new online map portal. 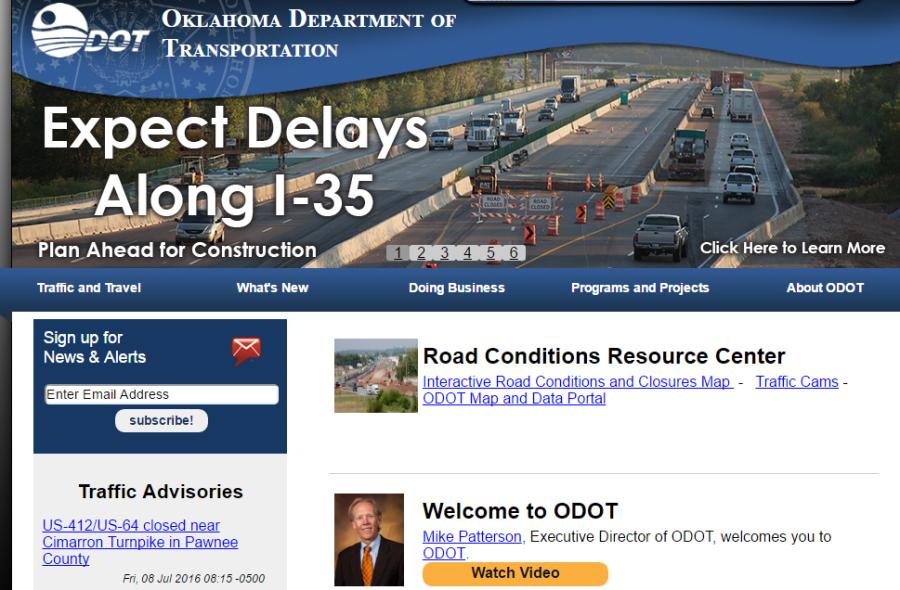 There’s a lot to explore within the Oklahoma Department of Transportation’s new online map portal.

There's a lot to explore within the Oklahoma Department of Transportation's new online map portal. From navigating bridge data to checking out upcoming construction projects and viewing a map of every railroad crossing in the state, the department is increasing transparency by providing a more interactive approach to many types of state maps and data.

Designed as a one-stop, all-inclusive data experience, the ODOT Map and Data Portal recently launched for public use at www.odot.org under the Road Conditions Resource Center. Mobile device users will need to click View Full Site to reach the full portal.

The portal includes more than 30 interactive maps and data sets such as the planned highway projects in the Eight-Year Construction Work Plan, current construction updates, live traffic times and cameras as well as traffic counts for state highways and mileage chart generators among many others. Many of the key maps also are listed by ODOT field division so that users may quickly hone in to their area of interest.

“We create and maintain a tremendous amount of data about our state highway system that we want to make more readily accessible,” said Dawn Sullivan, ODOT director of capital programs. “This portal will be useful to contractors and vendors as well as the general public wanting to learn more about construction plans and highway conditions for their area.”

The new online portal also allows the department to maintain and update public data closer to real-time. Some data will be updated weekly while other maps and data sets will be updated as needed.

An interactive tool bar in the upper left corner of all the maps allows users to toggle layers on or off, add base maps, measure or share the map. There are six maps ready for use on mobile devices with more scheduled to be available in the future. Other types of maps and data available within the portal include:

• A county report map provides a significant amount of road and bridge information by clicking on each county and then choosing a report such as school district boundaries, U.S. Census Bureau information and historical data.

• A complete inventory of structurally deficient and functionally obsolete bridges, both on and off the state system. Each data point contains detailed information about the location, the type of bridge, year it was built, traffic counts and whether it's on a school bus route along with other data.

• The public also will find a map dedicated to load-posted bridges. These are bridges with a posted weight limit for vehicles that may use the structure.

History and trivia buffs have not been left out of the map portal. They will find several applications of interest, including:

• Historic Bridges and Roadways map application that shows the location of Depression-era bridges from 1933-45 and more than 100 truss and arch bridge locations statewide.

• Memorial Roads and Bridges is an inventory of every highway and bridge designated with an honorary name by the state Legislature. The public may apply to have a bridge or state highway named after a loved one through their state legislator.

• A county population map shows not just the current U.S. Census population for each county, but historical population numbers going back to 1890.

The online portal was created by ODOT in-house using industry-standard mapping tools with an annual $17,500 licensing cost. Engineers and contractors who already use ODOT mapping data also may find many of these maps and the underlying raw data via ArcGIS Online by using the keyword “okdot.”