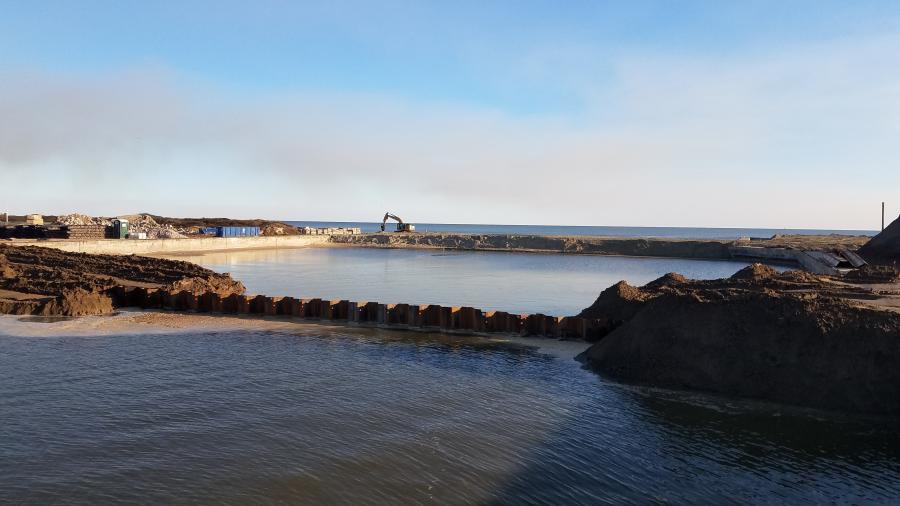 The Rollover Pass cuts through the Bolivar Peninsula. This image illustrates the challenges of working in area with a lot of water. (Texas General Land Office photo)

The first step toward the construction of a new Bayside park in Gilchrist, Texas (Galveston County), is the filling in of the Rollover Pass in the Bolivar Peninsula, a $7.4 million project that began last October when crews from Brizo Construction LLC commenced its operations to fill in the 200-ft. wide and 1,600-ft. long strait (canal).

The project, initiated by the Texas General Land Office (GLO), was funded by an appropriation from the Texas Legislature in 2009. The new park will be created and managed by Galveston County. 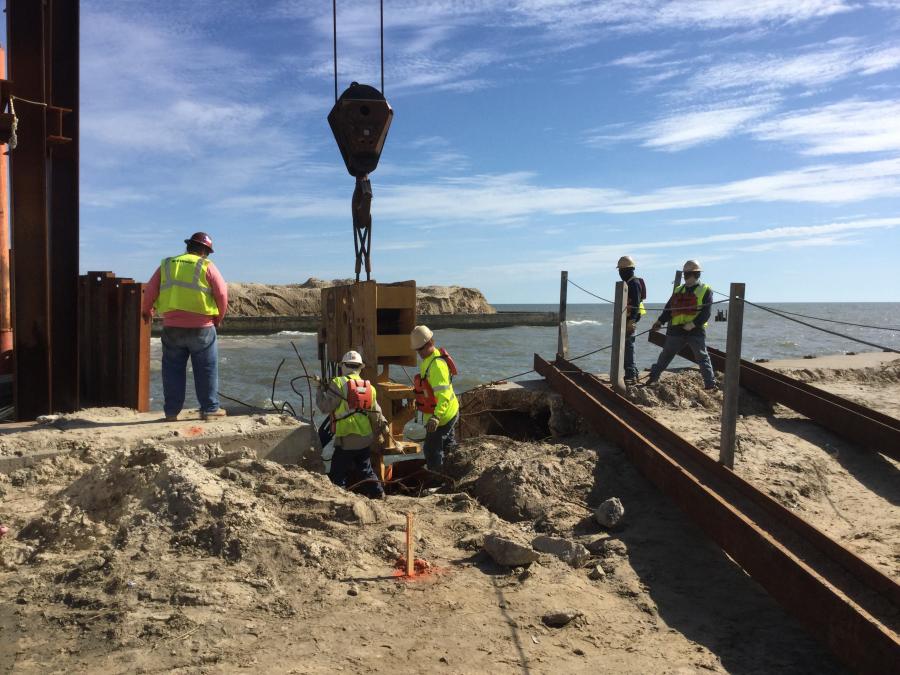 The pass's north and south sides were closed on Sept. 30. The operations to fill the straight with sand, approximately 160,000 cu yds, should be completed by late April/early May. The park and recreational area, which includes a fishing pier on the Gulf of Mexico side of the peninsula, will be built on the site of the former pass and is expected to be completed in 2021. The Lauderdale Dock also will be renovated.

"The project is on schedule," said David Green, the GLO's deputy director of coastal resources. "We understand that that Rollover Pass is a highly valued location for the Galveston community and fishermen across the state, [which is why a new fishing pier is an integral part of the park project]."

The GLO has applied for an official permit for park and pier construction through the U.S. Army Corps of Engineers. Initial plans for the park include nature walks and paths, and viewing sites to watch birds and other wildlife.

The closure of the pass was authorized by the Texas Legislature in 2009, under Senate Bill 2043. The pass, an artificial strait, was cut into the Bolivar Peninsula in 1955 by the Texas Game and Fish Commission [now Texas Parks & Wildlife] at the peninsula's narrowest point.

"The pass connected the Gulf of Mexico with Rollover Bay and was intended to improve water quality and salinity in the bay and help with fish migration, while also improving local fishing conditions," said Karina Erickson, the GLO's communications director. "It achieved the latter result and has become one of Texas' most popular fishing spots. Unfortunately, the pass has created a number of damaging side effects that threaten public and private property and cost Texas and U.S. taxpayers hundreds of thousands of dollars every year. Costly erosion, environmental damage, storm threats and safety concerns have plagued Rollover Pass for years. Flow velocity threatens the State Highway 87 bridge, which is the only land access to the Bolivar Peninsula and the primary hurricane evacuation route. The closure [also will allow] nearby estuaries to return to their natural state and strengthen natural fish and oyster habitats."

A few years after it opened, the pass had seriously widened due to erosion and walls were installed to prevent further widening. Studies have determined that the pass contributes to significant erosion on the beaches, south and west of it, which also affected the shorelines of homeowners. 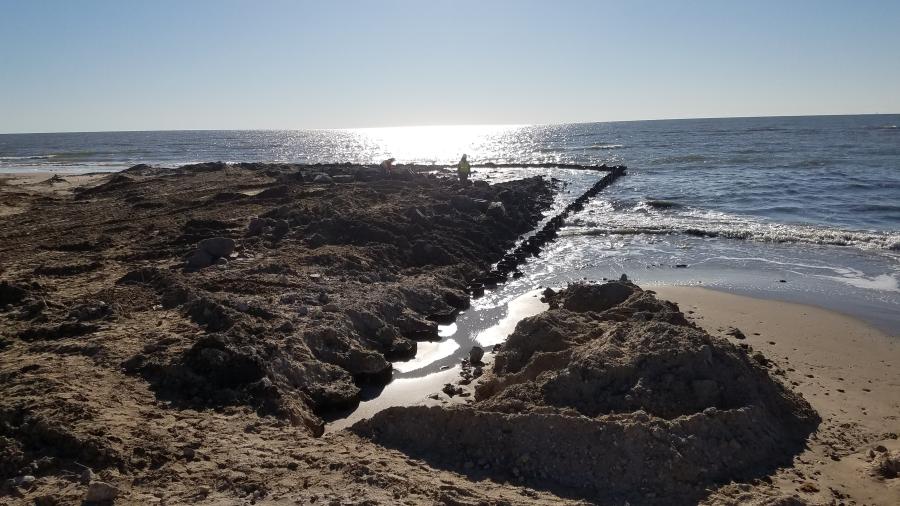 "The pass also causes sand and sediment to be diverted and deposited into the Gulf Intracoastal Waterway, a key transit route for goods and products to and from Texas ports and cities," said Erickson. "In order to maintain navigability, the U.S. Army Corps of Engineers has to dredge the Rollover Pass segment of the Intracoastal Waterway every year to remove sediment, costing taxpayers from $600,000 to $1 million. The GLO and Galveston County also have to add sand to the eroded beaches each year, costing about $166,000. The Texas Department of Transportation also spent $675,152.33 in emergency repairs after Hurricane Ike due to Rollover Pass, and the GLO spent more than $827,000 in federal matching funds for beach nourishment after three hurricanes from 2001 to 2008."

Several Galveston and Houston residents held a protest against the filling operation on the first day of operations. The project itself was subject to legal challenges for several years before it was green lighted.

Wildlife took advantage of the new habitat and it became home to more than 28 species that included blue crabs, sheepshead shrimp, various species of fish, oysters, mullets and black drums, Atlantic croakers and other marine life. Personnel from Texas Parks & Wildlife have relocated more than 900 animals to adjacent areas following the closure of the area that linked the pass to the Gulf Intracoastal Waterway.

TxDOT officials are currently evaluating the state of the SH 87 bridge and its future. The bridge is the primary hurricane evacuation route for the residents.

"The storm surge from the last hurricane took out half the bridge, which brought it down to two or three lanes," said Kevin Frenzel, the GLO's program manager and project manager for the Rollover Pass closure.

Before any material could be poured into the pass, Brizo crews had to demolish and remove existing concrete sidewalks, handrails, parking bollards, and rusted steel sheet piles and timber objects that are not slated for reuse. 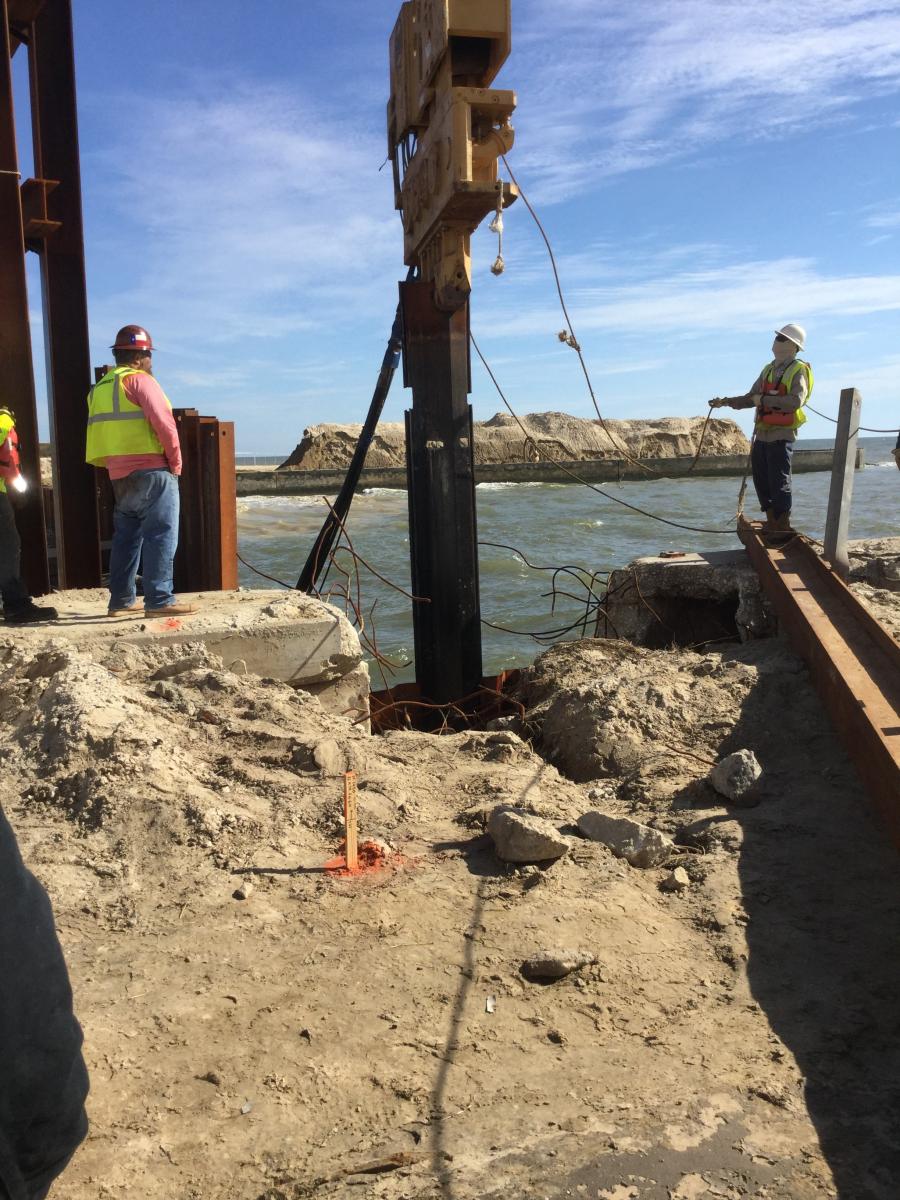 "The existing concrete will be broken down, separated, and reused to fill in the very bottom of the pass," said Frenzel. "All other materials were taken off site for proper disposal."

Following the demolition, steel sheet piles were driven across the mouth of the Gulf and Bay sides to form temporary walls and cut off the tidal flow of water through the pass.

"The existing concrete buttresses will be removed from the Gulf side and will be reused to create two fill stabilization structures," said Frenzel. "A large crane, barge, and bulldozers will be in use at this time. After this is done, Brizo will place beach sand outside the temporary walls, and a permanent steel sheet pile wall will be installed on the Gulf side of the pass."

The concrete pieces from the demolition for the bottom fill are cleaned before being placed.

"The mid-level of the pass will be general fill sand, and the top portion will be comprised of beach quality sand," said Frenzel. "Using beach quality sand, a new dune will then be created on the Gulf side that will match the alignment of the existing dunes on either side of the pass. The dune will be planted with native beach plants to help keep it stable and to allow it to work as a natural dune. Finally, the temporary walls will be removed, and stormwater runoff swales [shallow ditches] will be graded to create positive drainage on the Bay side."

The GLO provided Brizo with sites to store sand and other materials, and set up an equipment yard and field offices. Ryan Glass is serving as Brizo's project manager.

"A lot of material has to be trucked in, so our challenges are coordinating with all the lane closures and getting it to the site," said Frenzel. "The weather has also been a big issue with different fronts and tidal actions. Brizo is continually having to make adjustments to the plan and schedule. The water was pumped out of the pass within a couple of days. It was fairly quick as they had some high volume pumps."

He added that beach quality sand "has very unique qualities" and that "anything that impacts the water quality and endangered/threatened species has to be beach quality sand, which is why the top three feet of the fill will be topped with it."

The demolition operations are proceeding smoothly.

"They are pretty much complete on the gulf side and will be starting on the bay side," said Frenzel.

The planning for the park construction is ongoing, and that will require additional earth work. CEG