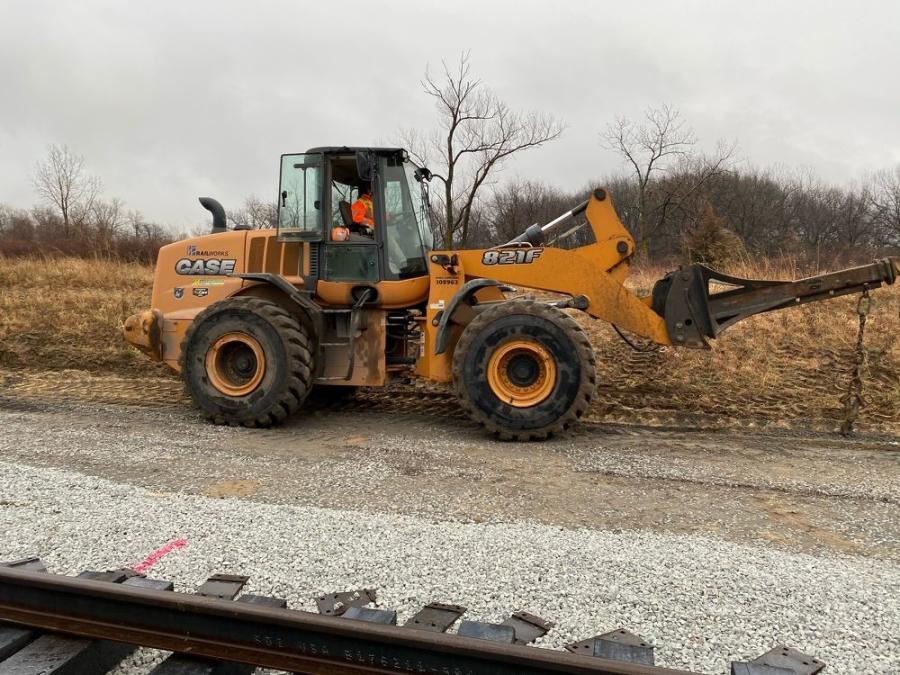 This Case 821F wheel loader is on the job helping to create two new rail yards, which will create rail storage for as many as 165 rail cars. (RailWorks Track Services Inc. photo)

A major infrastructure effort that includes multiple projects is taking shape at Port of Indiana-Burns Harbor. Work on the FASTLANE grant undertaking includes two new rail yards and an extension to the port's rail network. 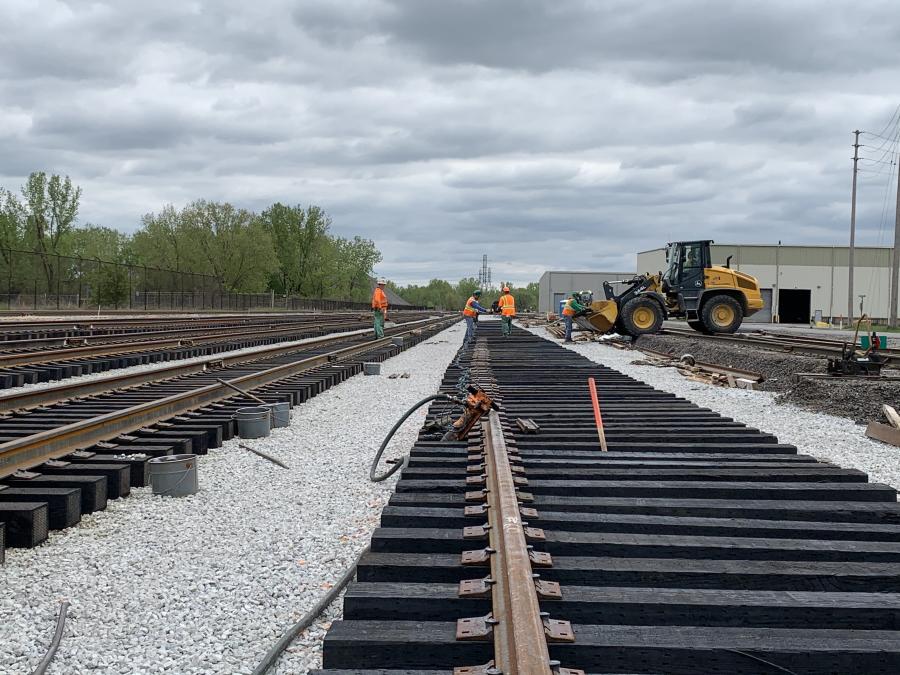 "Located in the steel capital of North America and the major hub of international trade and mega project cargo shipments, Port of Indiana-Burns Harbor is spending $20 million on our port's infrastructure to increase its cargo handling capacity and multimodal connections," said Ian Hirt, Port of Indiana-Burns Harbor port director. "Specifically, the ability to handle unit trains will reduce transportation costs for our tenants; the new dock areas will increase operational efficiency; and the truck marshalling yard will minimize emissions and reduce the chance for accidents.

"The Port of Indiana-Burns Harbor is one of the most modern ports on the Great Lakes, and is strategically positioned to serve the Chicago metropolitan area by connecting with all six Class 1 rail carriers, five interstates and three different types of marine vessels. The port's ability to connect river barges, lake vessels and ocean ships is a critical component for its success, and is a primary reason some of the world's largest steel mills have located in this region."

The project calls for construction of a new 2.3-acre cargo terminal with multimodal connections for handling cargo transfers between ships, barges, rail cars and trucks, improvements to the dock apron, a dock expansion and a new 6-acre truck marshalling yard that will relieve congestion along port roads.

Two new rail yards will create rail storage for as many as 165 rail cars; accommodate a 90-car unit train; and provide railcar switching within the port. This effort is expected to improve operating efficiencies for port companies, while improvements to the west dock, including extending a retaining wall and paving a dock apron, will result in an additional 1,200 ft. of usable dock space.

According to Hirt, now is a good time to perform the work.

"We are committed to investing in our ports and helping our port companies develop a sustainable, long-term, competitive advantage that will fuel future growth. Funding became available and we seized upon this opportunity."

Hirt noted that all five projects will be finished by 2022.

Construction on the next three phases of the project will begin in the spring 2021. The final project, which some consider the most important, is the construction of a 7-acre truck marshalling yard. Commonly referred to as a "cell phone lot for trucks", drivers can turn off the trucks and rest in an enclosed reception area while waiting to unload/load freight, helping alleviate truck congestion and the accompanying safety and emission concerns.

Hirt explained that the work needed to be performed in stages.

"Our engineering team worked alongside the project's general contractor and engineering team to identify the process to ensure the project is successful and the desired outcome is met. The FASTLANE strategic plan was outlined by phases of construction based on the size, scope and complexity of the infrastructure upgrades."

According to Hirt, the biggest challenge on the project involves the wide variety of engineering and construction work to be accomplished, taking place over a wide variety of terrain.

"This requires extensive coordination amongst a variety of parties, as well as many different regulatory hurdles to jump. Since a federal grant will be paying for a portion of this work, that presents additional challenges, such as paperwork, purchasing, vendor selection, etc., and puts a tight timeline on when the work must be accomplished."

As for unexpected issues during construction, a few underground lines have been encountered that were unexpected, forcing crews to find workable solutions to re-route them, or encase the pipes where appropriate. Regarding the east rail yard, workers had to re-route E. Boundary Drive and remove a small section of rail, then excavate the area where the tracks are located before laying the track.

"We also installed an airline that the trains will be able to use. For the west rail yard, it was a greenfield site, so nothing needed to be re-routed. Some excavation needed to be done to connect the west railyard spur to the port's existing rail system."

Hirt said weather has not been a significant factor, so far.

"Last winter was fairly mild, so that enabled us to get ahead of schedule. However, some COVID-related supply issues forced things to get delayed by a few months, and we ended up finishing the east rail yard a little later than expected."

A variety of heavy machinery is being used on the job, including a Harsco 6700 SJ2 tamper. Main materials include railroad track, ballast rock, rail turnouts and rail switches.

Overall, the site was in good condition before work began.

"One road had to be relocated and some excavation work was required. No buildings were demolished. A road was removed and some dock area had to be torn apart to lay the connecting tracks. Some old railroad track also will be removed."

The concepts for the project were first developed in 2016. A federal grant was awarded in 2017, with the first shovel placed in the ground the summer of 2019.

The Port of Indiana-Burns Harbor opened a half-century ago, and is operated by Ports of Indiana, a statewide port authority operating three ports on the Ohio River and Lake Michigan. Officials marked the 50th anniversary without much fanfare.

"Due to COVID-19 restrictions and precautions, we were unable to host a traditional large group gathering to celebrate the milestone," said Hurt. "We issued a press release and shared on social media posts milestones and complementary pictures throughout the port's 50-year success. State and local dignitaries involved throughout the process were recognized, and shown gratitude for their leadership.

"The infrastructure enhancement project is exciting and rewarding. At Ports of Indiana, we think in 50-year increments, and believe strategic investments in port infrastructure produce a foundation for long-term growth, bring a positive economic impact to the area and support trade throughout the state." CEG