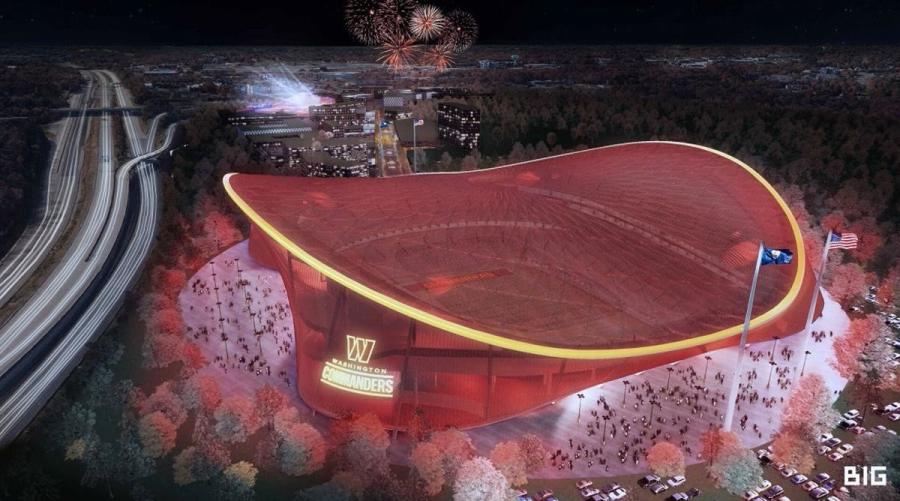 The Commanders bought 200 acres in Woodbridge that could become home to a $3 billion stadium (Bjarke Ingles Group [BIG] rendering).

There are conflicting reports that the NFL's Washington Commanders may have spent more than $100 million for land in northern Virginia, a possible next step in building a new stadium, as well as numerous retail shops, restaurants and apartments.

According to a source with knowledge of the purchase, ESPN said May 23 that the Commanders bought approximately 200 acres in Prince George's County, but the deal had not yet been filed with the county.

But the Washington Post disclosed that Virginia state Sen. Scott A. Surovell (D-Fairfax) was told by a Richmond-based lobbyist for the team that the Commanders had only acquired the right to buy land in Woodbridge, near Potomac Mills, and now has an option-to-purchase agreement to buy it.

One ESPN source called the Woodbridge site the Commanders' preferred location for a new stadium, but other options for the team remain open.

The NFL franchise had been considering five potential sites for a new stadium, three of which are in northern Virginia: in Sterling, near their current practice facility in Ashburn and close to Dulles International Airport, the Woodbridge site off Telegraph and Summit School roads, and on land near Interstate 95 in Dumfries.

In addition, the team would like to return to the District of Columbia to play at a new facility at the old Robert F. Kennedy (RFK) Stadium site, their home from 1961-96. But, because it is on federal land, numerous governmental hurdles currently make that a longshot, ESPN noted.

The fifth site would be next door to the Commanders' current stadium, FedEx Field in Landover, Md., where the team has played for the last 25 years.

There is a chance the pro football team will buy another 65 to 70 acres at the Woodbridge site, approximately 23 mi. southwest of the U.S. Capitol Building in Washington, and just off I-95. It would also be about 80 mi. north of Richmond.

The Commanders fancy the Woodbridge site because of how it can be developed, ESPN said.

A source told the national sports network that Washington's plans include a 60,000-seat domed stadium — allowing it to be used year-round — as well as home to the Commanders' practice facility, an amphitheater that seats between 15,000 and 20,000 people, a small indoor music arena, high-end retail shops, bars, restaurants and residential space.

The venue's roof would be designed to be translucent, and the stadium's facade could change colors. For instance, it would be white during the day and, if the team preferred, burgundy at night, the dominant color of the Commanders' uniforms and helmets.

Washington wants to leave FedEx Field, located in Prince George's County, Md., which was built by former team owner Jack Kent Cooke and opened in 1997, 5 mi. east of Capitol Hill. The team owns the stadium as well as the surrounding property, but their contract to play at FedEx Field expires in 2026. The Commanders could renew it and stay on longer, if needed, according to ESPN.

The network reported that before agreeing to a new site, though, the team needs to learn how much money Virginia and Prince William County are willing to commit before finalizing plans to build.

That is why the Commanders are keeping their options open in Maryland and the District of Columbia as well as other sites in Virginia.

Maryland has said it would spend $400 million to develop the area around FedEx Field so that the team could then build a domed stadium by their current home.

One of the more glaring problems with building a new NFL stadium in Woodbridge is the amount of traffic it would generate, causing some to worry about the effect on the community if the Commanders were to move its games there.

The Post reported May 23 that the impact to local traffic on game days "would be pretty darn significant" in a county that has been heavily dependent on automobiles for transportation, said Stewart Schwartz, executive director of the Coalition for Smarter Growth, an organization that calls for pedestrian-friendly communities built around mass transit.

As it is, that part of I-95 is perpetually congested during rush hour, the Washington news source said, a reflection of the fact that Woodbridge has become more densely populated as the population in Prince William continues to grow.

County officials and state lawmakers who represent the area have lobbied for extended mass transit into the area, though that could be prohibitively expensive without additional development built around those trains, Schwartz said.

Last year, the Virginia Department of Rail and Public Transportation estimated that it would cost $27 billion to extend either the Yellow or Blue Washington Metro rail lines to that part of Prince William, the Post reported.

Virginia's legislature continues to discuss creating a Stadium Authority that would authorize money to help pay for a new Commanders playing field. Under one proposal, the team would receive $350 million from the state.

However, it is much more uncertain how much money the Commanders would be willing to spend on constructing a stadium. 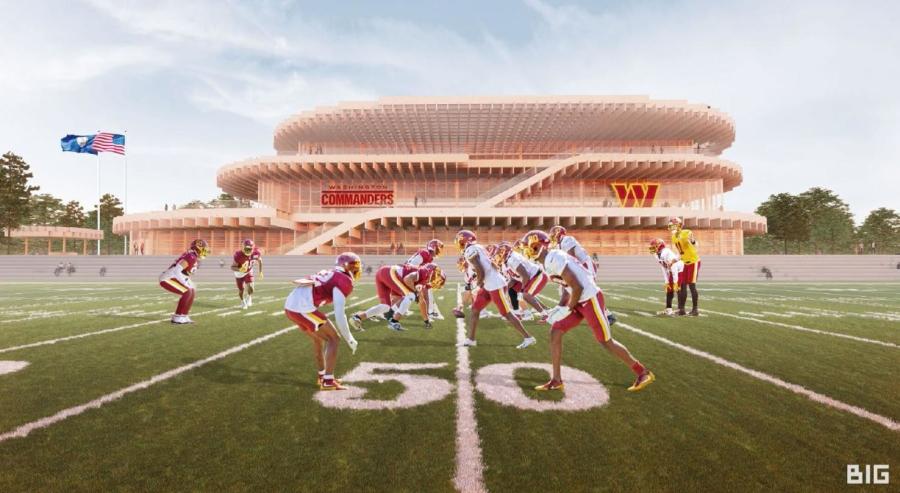