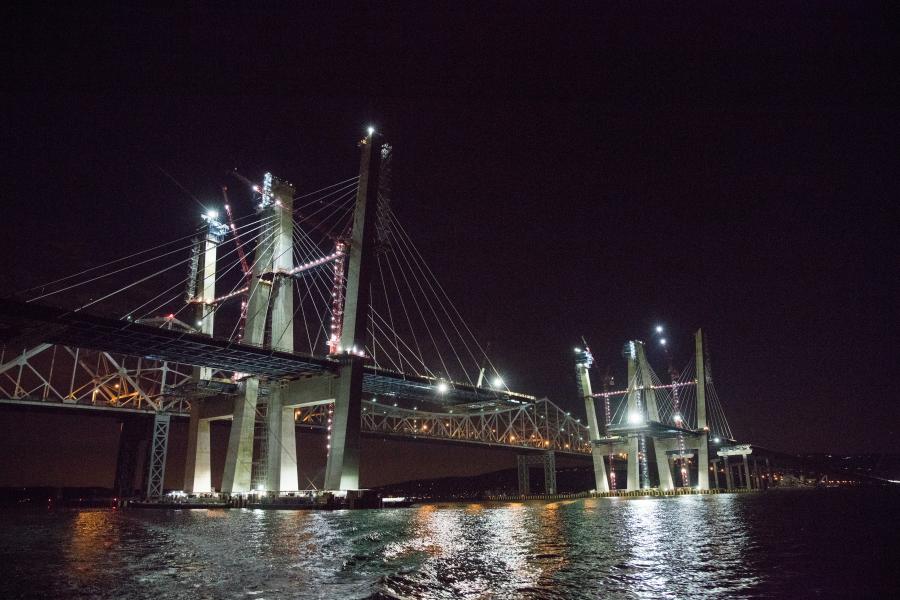 Tappen Zee Bridge under construction above the Hudson River. Picture via www.newnybridge.com

Steel erection on the westbound approach lanes for the new Tappan Zee Bridge in New York has recently completed.

“Over a period of about 18 months, we have erected approximately 88,000 tons of structural steel on the Hudson River,” said Neil Napolitano, area manager of approach spans on the massive bridge project.

“At one point, we put up five assemblies in five days. It sure showed what can be done when you have the commitments of some of the most capable fabricators and builders in our country.”

The new bridge is being constructed mere yards from the original bridge, which opened in 1955. A replacement is needed to accommodate the heavy traffic on the bridge, which has increased from fewer than 40,000 vehicles per day to more than 140,000. When completed, the new bridge will be one of the widest bridges of its kind in the world and one of the longest cable-stayed spans in the nation.

The new bridge is being built by Tappan Zee Constructors, a design-build LLC composed of Fluor Corporation, American Bridge Company, Granite Construction Northeast and Traylor Bros. Three AISC/NSBA member fabricators, High Steel Structures, Hirschfeld Industries and Canam-Bridges, will together provide more than 110,000 tons (99,790 t) of structural steel while playing a key role in the support of more than 7,700 jobs. And just as the fabrication was provided domestically, so too was the steel production, with 160,000 tons (145,149 t) of steel plate for both the superstructure and sheet pilings coming from AISC-member ArcelorMittal.

The design-build approach generated more than $1 billion in savings compared with the state and federal cost estimates.

“Our prefabricated steel sections have been a huge value to us,” Napolitano said. “Our subcontractors have done a significant amount of their work at offsite facilities, rather than on the river, which would be more time consuming.”

The new Tappan Zee Bridge features a steel girder system, with center-to-center spacing of 25 ft. (7.6 m) and additional floor beams to support the deck. Essentially, it's the same system used on bridges throughout the United States, simply on a far greater scale.

“This has been a fantastic project to work on,” said John O'Quinn, formerly of Hirschfeld Industries and now with High Steel Structures. “It's very straightforward in terms of fabrication and constructability, which makes our job as fabricators much easier. We spoke numerous times with the design team on how best to construct a bridge of this magnitude. Everything we used on this bridge can typically be seen on bridges the general public drives over/under in their daily travels. The only major difference being, most of the Tappan Zee girders are 12 feet deep and weigh upwards of 100 tons.”

The new bridge will last at least 100 years without the need for major repairs. CEG