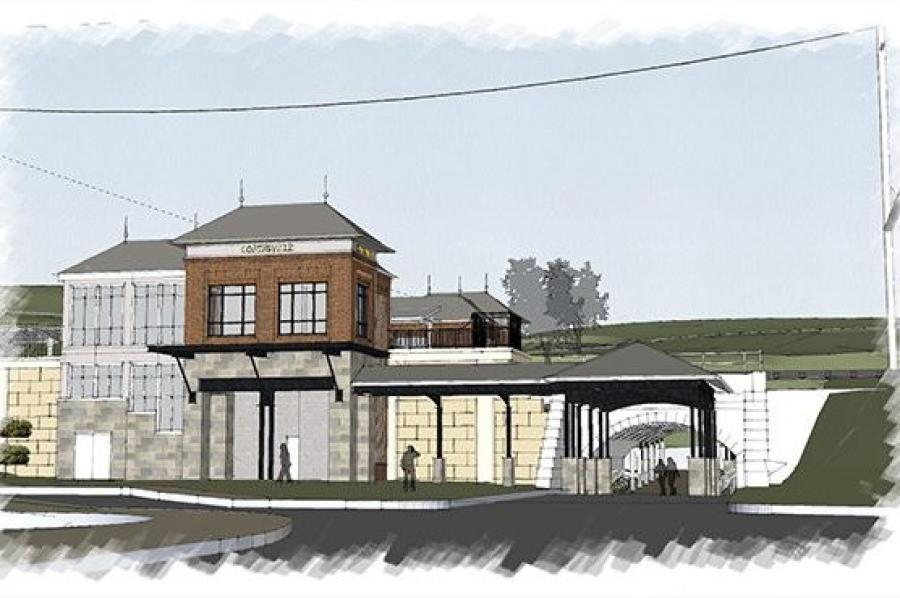 Construction of the new Coatesville train station is slated to get under way later this year and expected to be completed by 2025. (PennDOT rendering)

The long-planned effort to build a new $65 million train station in Coatesville, Pa., took another step forward Oct. 22 when federal, state and local officials broke ground on a project that will seek to revitalize the Chester County city.

Pennsylvania News Today noted that in Wolf's remarks he described himself as a long-term user of Amtrak's Keystone Corridor. In addition, he said a modern Coatesville station will meet the needs of the 21st century and improve fairness and accessibility.

"The project will improve equity, accessibility and reliability in transportation and that's exactly what Coatesville needs to continue growing and thriving," Wolf said.

More than a decade in the making, construction of the new train station and commuter lot adjacent to it is expected to get under way later this year — weather permitting. The revitalization project is slated to be completed by 2025.

The building effort is a Pennsylvania Department of Transportation (PennDOT)-led initiative. The Federal Transit Administration is expected to kick in $52 million of the project's overall $65 million cost, with the remaining $13 million to be provided through PennDOT and Chester County funds.

Station to Replace Facility Closed in 1996

The new transportation hub will be built on Fleetwood Street between Third and Fourth avenues in Coatesville, just east of the existing historic station building at Third and Fleetwood. That facility has been closed for 25 years and does not meet ADA accessibility requirements.

But the new Coatesville train station will include updated ADA accessibility as well as provide level boarding platforms, elevators, ramps, site lighting and security cameras, improved drainage and surface parking for local and regional commuters, PhillyVoice reported. The station's platforms will have canopies and seating, and an audio-visual public address system.

The rails themselves also will be improved upon and will include a bypass track to be constructed by Amtrak to facilitate train traffic past the station's high-level platforms.

The bridge that takes Fourth Avenue underneath the railroad will be converted into a pedestrian underpass, and a tunnel liner will be installed to eliminate water leakage.

Designers also have given the builders a new layout for Fleetwood Street that will maximize space for commercial and retail development on the south side, opposite the new station's location, PhillyVoice reported.

During the project design phase, PennDOT worked with the local community on streetscape improvements on Third and Fourth avenues in 2019 and 2020 to improve pedestrian and bicycle access from downtown Coatesville to the new station. Its contemporary designs were completed earlier this year.

PhillyVoice noted that Amtrak has said it would increase train frequency at the new station once completed, and SEPTA has signaled plans to resume Regional Rail service to the city in the future too.

"The restored regional rail service will go a long way to help in Coatesville's revitalization, boost economic opportunities, and most important, bring equitable transportation to the people of this city," Chester County Commissioners Chairperson Marian Moskowitz said at the groundbreaking. "I look forward to seeing these channels of transportation allow people to come here and explore the city's culture and strength."

SEPTA Regional Rail once served Coatesville but truncated the service, ending in Thorndale. The train — then known as the R5 — traveled between Center City and through the Main Line and other western suburbs of Philadelphia.

Service to Coatesville ceased in the mid-'90s due to low ridership, but the area's growing population and local advocacy have resulted in the station's revival.