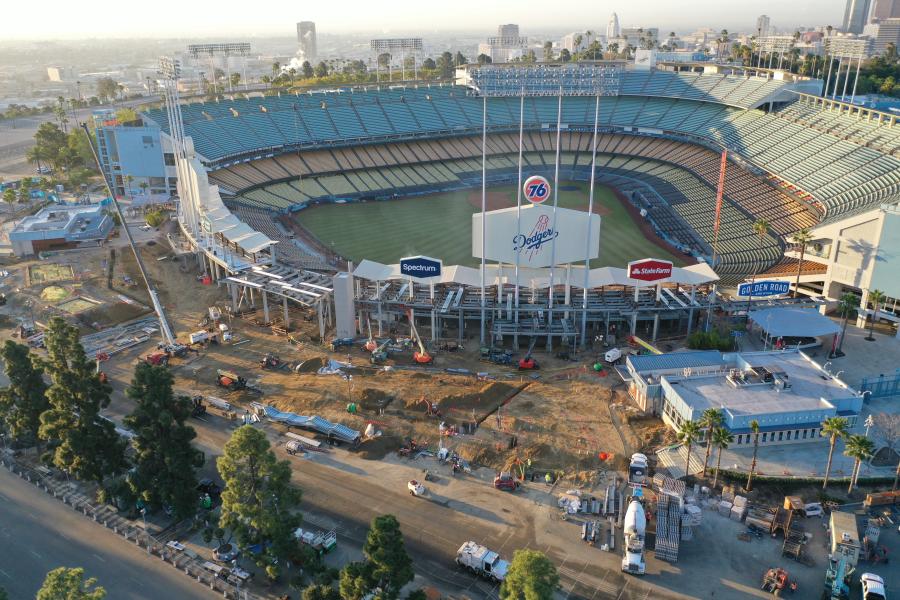 The pavilion renovations include new restrooms, enclosed bars with views into the bullpen, the creation of standing room areas at the top of each pavilion, enhanced ADA seating and “home run seats” just beyond the outfield wall.

As part of the Los Angeles Dodgers $100 million stadium upgrades, crews from PCL Construction have ensured to protect the team's legacy.

During renovations, the stadium's historical elements were protected, including the outfield stands and corrugated metal roofing.

"The left and right outfield pavilions were originally constructed as 12 different structures that were tightly grouped together and separated with expansion joints," said Rorah. "We tied them all together into one structure and added a new concourse on top with new bars, concession stands and restrooms underneath."

"We had to relocate some columns and footings and do some innovative foundation work to make sure we avoided as many utility conflicts as we could as while digging and minimizing the cost impacts from them," said Rorah. "Nabih Youssef, the structural engineer, was fantastic to work with on this aspect. The keys to delivering a fast-track project of this size is having a whole team pulling in the same direction and that includes the owners, the design team and the subtrades. There is something about working at Dodger Stadium that we recognize with every project — every subtrade brings their ‘A' Team. This is a marquee job for everyone.

"Having a design team that basically on call 24/7, including the various engineers and architects, and has members on-site almost every day doing walks and solving problems has been kept the project moving quickly," he added. "If you don't get an answer for one day, you can lose two shifts. I call it an orchestra of people working close together and getting it done in sequence and on schedule."

While the stadium site occupies a large area, the work has been concentrated in a few areas within the exterior of the perimeter.

"It was a logistical challenge to get all this work underneath the pavilions and the small footprint of the escalators," said Rorah.

Tying the metal structures together via the link beams, was difficult and covered many critical paths.

"Trying to do a kitchen or bar space in three months is challenging in itself, but when you have to tear apart and rebuild the structure above it before you can start on those elements, it takes a month off your schedule," said Rorah. "This includes all the underground stacking and various scopes of work in the same space and phasing it through. That was a huge accomplishment. Escalators two and three were precast and have bridges that go from levels seven to nine. They also travel over level eight where left field is the players entrance and on the right field is the loading dock for the food services. Now fans can go to that top deck for the stadium view by way of the escalators instead of having to go around and take the original stairs embedded into the hillsides."

PCL has been able to use the stadium parking lots as work areas and to store material and equipment and the main accesses to get inside the stadium are large enough to bring in materials and big pieces of equipment.

Coordination with the stadium management when it comes to events has been useful, and only one shift was lost due to the LA Marathon.

"Jeyre has been leading the charge from our office and corporate side and Keith has been our leader in the field," said Rorah. "Both of them are the reason that we have been successful."

The pavilion renovations include new restrooms, enclosed bars with views into the bullpen, the creation of standing room areas at the top of each pavilion, enhanced ADA seating and "home run seats" just beyond the outfield wall.

"New elevators are currently under construction in the right and left field plazas to help move fans easily to and from this new centerfield plaza," stated a Dodgers press release. "Additionally, bridges will be constructed to connect the new pavilion standing room decks to the rest of the stadium for a 360-degree connection around the park's perimeter. These new elevators and bridges will also provide easier access to the Dodger Stadium Express stop in Lot G through the Centerfield Plaza.

The project also includes a new sound system to replace the current speaker tower and provide an enhanced audio experience to fans on all levels of the ballpark with more directed sound inside the stadium and the placing of a statue to honor Hall of Fame left-handed pitcher Sandy Koufax, the second at Dodger Stadium following the dedication of the Jackie Robinson statue in 2017. Both statues will reside in the centerfield plaza.

Guggenheim Baseball Management, which has owned the stadium since 2013, has upgraded the venue with fan-friendly improvements including the creation of two new entrance plazas on the field level, tiered seating and bar areas overlooking both bullpens, two new HD video screens, new team stores, wider concourses, renovated restrooms, enhanced concessions and kids play areas. There also have been structural and behind-the-scenes upgrades to the stadium's infrastructure and the construction of new home and visiting clubhouses, batting cages and weight rooms. CEG