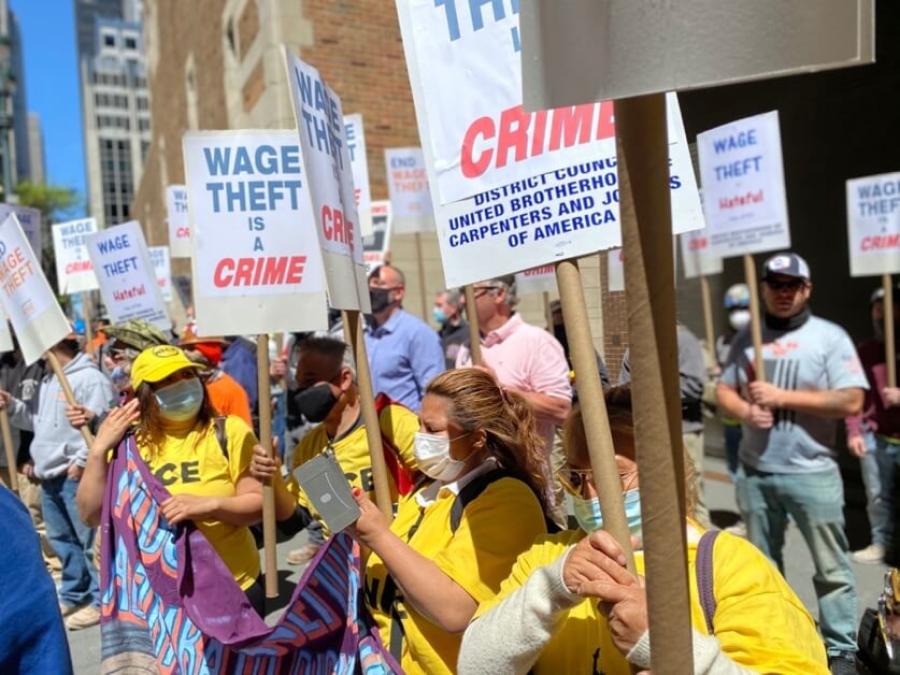 Union members rally outside the Waldorf-Astoria in Manhattan on May 6, 2021, in support of a bill that would combat wage theft in New York state. (NYC District Council of Carpenters photo)

Legislators in the New York State Senate approved a bill June 3 that would hold construction contractors responsible for wage theft committed by their subcontractors.

The measure, which passed the Assembly and is now headed to Gov. Cuomo for his signature, means general contractors could be held liable or even face civil violations if a subcontractor on a job site fails to pay its workers.

"An honest day's pay for an honest day's work," said Sen. Jessica Ramos (D-Queens), one of the bill's sponsors, in remarks reported by the New York Daily News.

"Under the incredible leadership of our Senate Majority Leader, the New York State Senate is taking action to protect construction workers from the hundreds of millions of dollars that are stolen from them every year by unscrupulous contractors and subcontractors."

According to the newspaper, union officials representing construction workers across the city have championed the measure to hold dishonest contractors accountable.

Under the measure, the prime contractor or construction manager will be responsible for unpaid wages for all subcontractors, no matter how far down the chain of subs the failure to pay occurs. In addition, general contractors will gain new authority to oversee the books of subcontractors to better ensure that workers are being paid all the wages they are owed, the Daily News reported.

The bill, sponsored by Assemblywoman Latoya Joyner (D-Bronx), was originally approved by the Assembly in January but was recently recalled and amended.

JD Supra, a national legal news source, noted that the proposed law in New York will allow a worker who claims wage theft — or another party acting on their behalf, such as a union or even the attorney general's office acting on its own accord — can seek payment from both his or her employer and the prime contractor on the project. Liability does not, however, extend to any intermediate subcontractors, construction managers which do not hold the trade subcontracts, or to project owners.

The proposed law also would provide more money for construction workers seeking compensation for non-payment of wages and benefits but imposes an increased risk and administrative expense to prime contractors as well as higher reporting costs to trade contractors, noted JD Supra. The news outlet added that it anticipated the new law in New York will increase costs for non-union construction projects due to the added reporting requirements and risk imposed on main contractors working in the state.