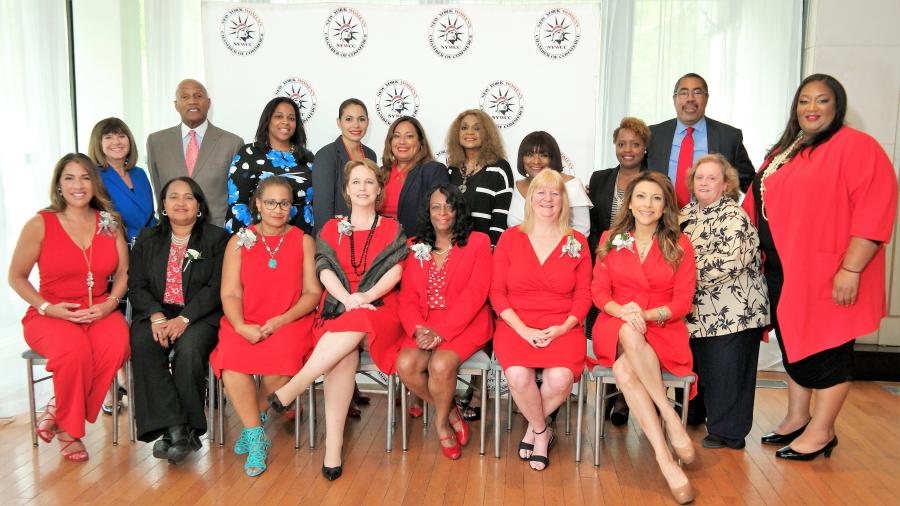 It was a dual celebration and double cause for applause. On Sept. 14, The New York Women's Chamber of Commerce (NYWCC) honored the accomplishments of 10 remarkable women and those who support them at its annual Women of Excellence awards ceremony, then cheered the NYWCC's own milestone moment: its 'Sweet 16' anniversary. This year, many of the honorees and presenters represented construction-related companies and agencies, a historically nontraditional industry for women that has made strides over the past 40+ years. The event was held at the Battery Gardens Restaurant overlooking the Hudson River in lower Manhattan.

Quenia Abreu, NYWCC president and founder, welcomed all saying “The NYWCC is about all of you,” then thanked the audience for their dedication to the advancement and empowerment of women.

Lina Gottesman, chair of the NYWCC and president/owner of Altus Metal, Marble and Wood, said “Today we are recognizing women who have made a positive impact on society … as we honor an outstanding representation of successful business and professional women.”

Vera Moore, NYWCC board member and CEO of Vera Moore Cosmetics, applauded Abreu as “a visionary, a fighter, someone who never takes no for an answer” and praised her for creating the organization in 2002.

Abreu said that advocacy is a large part of the organization's mission – a “labor of love” - which advocates at City Hall and in Albany to ensure that mandates for participation of MWBEs are renewed regularly and not allowed to sunset.

This year, the event also raised funds for ContractHER, a new NYWCC program working to increase the funding and number of city, state and private contracts awarded to women entrepreneurs, with a focus on women of color. Abreu saluted LaToya Smith, president of Brass City Media and participant of the first ContractHer Cohort, who told the group how the program helped grow her business.

Honoree April Horton, director of external affairs and government, Verizon, thanked the NYWCC for their “foresight and commitment” and noted that the women in the room “are changing the game…paving the way for innovations supporting MWBEs.”

Honoree Connie DeLaigle, affirmative action coordinator, Port Authority of NY & NJ JFK & LGA Airports, noted her longtime involvement with aviation and the billions that have been awarded to MWBEs during her tenure.

Honoree Colleen Galvin, SVP, Community Development, CITI, spoke of the need for pay equity for women in leadership positions, and advised all to “be open to possibilities the universe will serve up.”

Honoree Suzanne Veira, chief diversity officer, NYC School Construction Authority, stressed the role of mentorship and said that today “programs are in jeopardy, but we are not. Women understand struggle, challenges, we don't let it get us down.”

Honoree Avis Yates-Rivers, CEO, Technology Concepts Group Int'l., was represented by Denise Joyner West, TCGI vice president of marketing, who called the low number of women in technology unfortunate as “we bring a different perspective, a creative bent, not a technical bent.”

Honoree Elizabeth Velez, president, Velez Organization, a construction manager and G/C, called women in the room “change agents,” and vowed that the threats to programs for social justice will not daunt them because “We must insist, we must resist, and we must persist...”

Honoree Liliana Gil Valletta, CEO & Co-Founder, CIEN+, a marketing/strategy agency, said that “the American economy cannot fulfill its full potential without us,” that U.S. population growth is driven by minorities, and that women drive the business world at a rate of 5 to 1.

Honoree Sandra L. Richards, managing director, head of segment sales & engagement group, national sales, wealth management, Morgan Stanley, congratulated all and thanked her mother and grandmother as “I am a reflection of their life's work.”

Honoree Maureen Murphy Arini, owner/president, J&M Corporate Painters, spoke of the importance of women working together in professional contexts and said, “We've cracked the glass ceiling, but it's still not broken.”

Corporate Partner Honoree, the Coca-Cola Company, was represented by Mayra Linares-Garcia, who said “Coca-Cola is honored to be a partner and share a mission to empower women” and concluded: “Here's to strong women – may we know them, may we be them, may we raise them.”

Community Partner Honoree, the Harlem Community Development Corporation, was represented by its president, Curtis Archer whom Abreu called “one of our funders who have been there for us.” Archer thanked and recognized all the “impactful women” who had influenced his life and career.

Since its creation, the Women's Chamber has provided business services and training to more than 20,000 individuals, assisted with the creation of more than 5000 new businesses and aided entrepreneurs in accessing 35 million in capital and 45 million in procurement contracts. The organization has also assisted more than 1000 entrepreneurs in applying for minority certification.