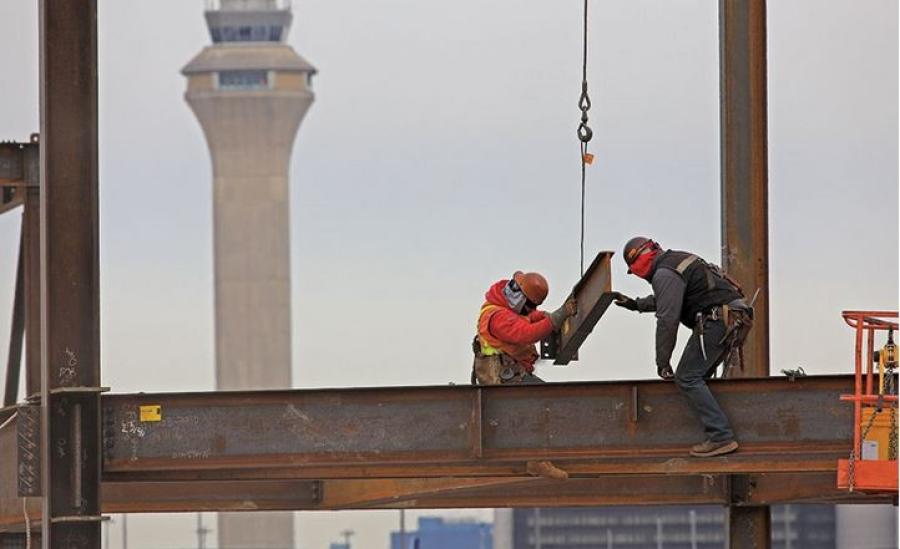 Construction of the terminal continued during the pandemic, with approximately 800 workers now on site. (PANYNJ photo)

While the coronavirus has made Newark Liberty International Airport a ghost town for travel, inside the new Terminal One the pace is just the opposite as lots of work continues to progress since the final piece of steel was lowered in place last October.

The $2.7 billion replacement for the aging Terminal A is on-time and on-budget and heading for a planned Phase 1 opening in the last quarter of 2021, said Kevin O'Toole, the chairman of the board at the Port Authority of New York and New Jersey.

Now, officials are looking to this fall, racing to get the building fully enclosed so construction crews can keep working into and through the winter months, explained Rick Cotton, the agency's executive director, during a July 27 tour.

"The goal is to be 60 percent complete by the fall," he said, while walking through the concrete, metal framing and glass structure. "The next goal is to have the curtain walls and glass completed by then so the building will be weather tight and interior work can move along."

When completed, Terminal One will have a total of 33 gates, able to serve airliners as large as the Boeing 777, said Huntley A. Lawrence, the Port Authority's aviation director.

COVID-19 also caused officials to introduce more flexibility into the new terminal, meaning that flights can be assigned to any gate, regardless of airline, Lawrence said.

The South and North Wings extend from the central part of the terminal. But the larger North Wing has a very Jersey-centric view of one of Newark Airport's main runways, plus the New Jersey Turnpike that parallels it, the Bayonne Bridge and the Port of Newark and Elizabeth. In the distance, travelers also can see Manhattan.

While giving a tour of the work at Newark Liberty, Cotton and O'Toole also spoke about a looming uncertainty at the Port Authority. While they said Terminal One construction will be completed, other projects in the bi-state agency's ambitions capital plan may never hit the drawing board without federal aid.

On May 13, the Port Authority asked the federal government for $3 billion in aid in the next coronavirus aid package to offset revenue lost when COVID-19 travel restrictions cut the legs out from under what had been record travel volumes in 2019. Local airports and the Port Authority Trans-Hudson (PATH) rail system saw ridership declines of more than 95 percent.

Since then, officials have made members of Congress from other states "aware" of the Port Authority's capital plan and the agency's "demonstrated ability to build world class facilities and create thousands of jobs," Cotton said.

"We want to be part of a strong economic recovery, but we have an estimated $3 billion shortfall," he added.

Port Authority officials have only talked in broad terms about which projects could be cut from the agency's ambitious $20 billion, 10-year capital plan, stopping short of identifying specific ones on the chopping block.

Cotton said the Port Authority has "looked at every project" and, while committed to finishing Terminal One, would have to analyze the impact of the revenue shortfall before making decisions on other projects that have not yet started construction.

Meanwhile, projects that various groups have lobbied for are in jeopardy, including an expanded Port Authority Bus terminal, a new Newark Airport AirTrain to replace the aging monorail, a PATH extension to the airport and the next phase of work on the iconic George Washington Bridge following the ongoing $2 billion "Restore the George" renovation efforts.

And there are plenty of jobs being created at the airport, with close to $200 million going to New Jersey-based companies.

Terminal One has a way to go before its flight ready, but the building layout is now in place.