NFL Stadium Under Construction Could be Future Olympic Site

One stadium under construction is the focus of the U.S. bid for the 2024 international games. 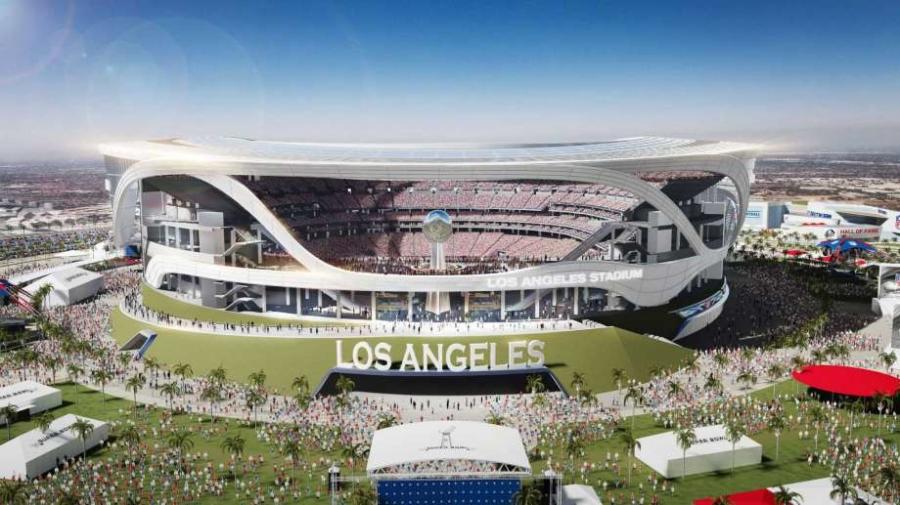 Leaders in Los Angeles will guide their International Olympic Committee guests from the Hollywood Hills to Santa Monica Beach to a construction site that will someday be a $2.6 billion NFL stadium that can also host soccer games.

If this week's tour is a success, Los Angeles will earn the chance to host its third Olympics.

Officially, Los Angeles and Paris are the only two bidders left for the 2024 Games that will be awarded in September at a meeting of Olympic leaders in Lima, Peru. On the table, however, is a proposal to use that meeting to dole out the next two Olympics — 2024 and 2028 — one to each city.

IOC President Thomas Bach said he wants to avoid producing so many losers in the multimillion-dollar Olympic-bidding game. Unsaid is Bach's need to avoid another bidding debacle, similar to the 2024 contest, if the rules remain the same for 2028.

The 2024 race began with five cities, but slowly, awkwardly, tapered down to two, after Rome; Hamburg, Germany; and Budapest, Hungary; all pulled out. And that's not including the embarrassment the U.S. Olympic Committee suffered when its first candidate city, Boston, stepped aside because of tepid — or, some might say, barely existent — public support.

Like Paris, Los Angeles is sticking to the party line, insisting it is in the mix only for 2024.

“Los Angeles is the right city for 2024 at this important time for the Olympic Movement and is only bidding for 2024,” LA 2024 Chairman Casey Wasserman said.

The 2024-28 issue is hardly the only unpredictable factor in a bidding process that has grown more confusing, even as the number of candidates dwindled.

A look at the key issues Los Angeles faces as it hosts the evaluation visit Tuesday through Friday:

POLITICS: When President Donald Trump first issued his executive order temporarily banning refugees and immigrants from seven predominantly Muslim countries, it threw some Olympic sports into flux: Namely, the U.S. wrestling team was scheduled for a trip to Iran, which was one of the banned countries.

That issue was worked out, and Trump's order is stalled in court, but his presence will certainly be felt.

“Both countries have a lot going on politically that can be game-changers at any minute,” said Jules Boykoff, a professor at Pacific University in Oregon who has written widely on the Olympics movement.

When centrist Emmanuel Macron defeated far-right candidate Marine Le Pen in France's presidential election, it took some uncertainty out of the Paris bid. Meanwhile, Trump's populist, “America-first” message is hardly the arms-wide-open stance the Olympics embrace. And yet, for his part, Trump is backing the bid, certainly knowing this is the kind of win he'd love to be a part of — the U.S. hasn't hosted a Summer Games since 1996 — even if he plays a nominal role.

COST: Los Angeles is pledging to stage the Games for a grand total of $5.3 billion, which would be around one-third of what Tokyo is expected to spend for 2020. It's a claim that speaks to Bach's mandate to keep costs down and stop spending billions on stadiums that don't get used much once the Olympics end.

A strong point of the Los Angeles bid, certain to be showcased during the visit, is that 95 percent of the proposed venues are already built, including the Los Angeles Coliseum, which would host the opening ceremonies, same as it did in 1932 and 1984.

TRAFFIC: The 2016 cinematic tribute to the sort of dreams that can come true in Los Angeles, “La La Land,” opened, fittingly enough, with a musical number taking place amid gridlocked cars on the freeway during rush hour. That traffic is as much a symbol of LA as the “Hollywood” sign or the NBA's Lakers, and it's certain officials will do their best to keep their guests far away from the snarls this week.

The bid promises to bring 100 percent of ticketed spectators to competition sites by public transportation or systems designed for spectators, such as shuttle buses. There are also memories of 1984, when traffic wasn't much of a problem in part because many of the locals left town or stayed off the freeways.

As the vote and any potential Games get closer, those numbers will certainly change.

Already in question is an LA24 claim that more than 1 million Facebook users said they wanted to see the Olympics in Los Angeles.

A report prepared for The Associated Press last month found that Los Angeles saw an explosion of support over a six-week period from places such as Bangladesh, Pakistan, Nepal and Indonesia. In Bangladesh, for instance, supporters of the bid rose from a few dozen to more than 113,000 in the span of six weeks.

LA stands by the numbers.—AP