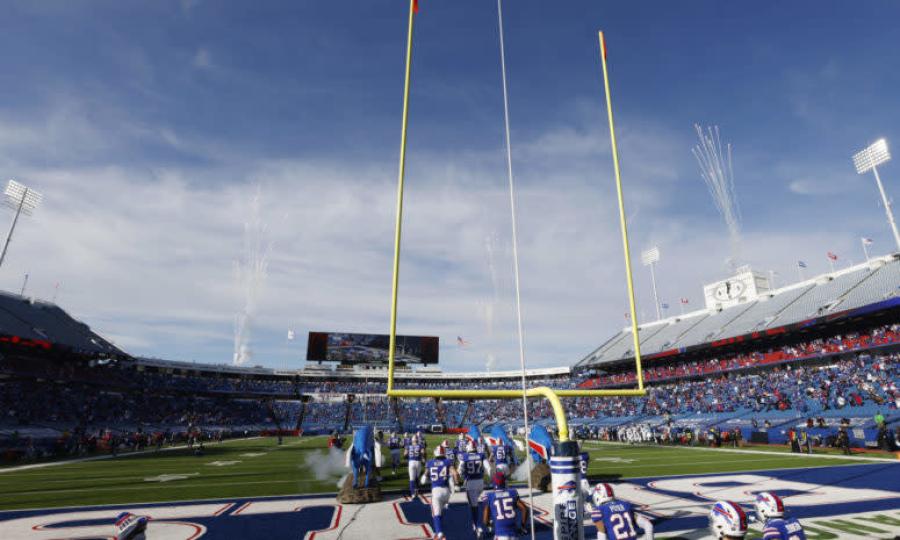 A proposed new $1.4 billion stadium for the NFL's Buffalo Bills would include about 60,000 seats and 60 suites, the Associated Press learned Aug. 31.

The new facility is planned to be built across the street from the Bills' existing 48-year-old stadium in the Buffalo suburb of Orchard Park.

The Bills have set a timeline for the stadium's construction that includes a completion date for no later than 2027. That agenda is based on how quickly a deal can be struck, according to an AP source with direct knowledge of the documents presented to state and county officials. Because the plan has not been made public, the person speaking with the AP asked to remain anonymous.

The team's current lease expires in July 2023 and would be extended until the new facility is opened, should the project be approved by the state of New York and Erie County.

The proposed capacity is about 12,000 seats less than the Bills' current facility, now called Highmark Stadium, which was built in 1973. The new venue would not include a roof, but it would be designed so that most of the seats would be protected from the elements, according to the AP's source.

The team initially considered a larger stadium with a price-tag of $1.6 billion before deciding to narrow the project's scope, the source explained.

Discussions between the Bills' parent company, Pegula Sports and Entertainment (PSE), and government officials opened in late May, with the parties holding an on-site tour at the Bills' aging home in late August.

At issue is how quickly a deal can be approved, and how the construction costs would be split between the team and taxpayers. Team owners Terry and Kim Pegula are committed to sharing part of the cost, the Bills have already announced, but have not identified how much.

The state and county will likely be asked to cover more than 50 percent of the project, raising concerns about the potential for taxpayer funding.

PSE's proposal is only preliminary at this point and subject to change based on discussions, with no renderings of the proposed facility having yet been submitted. Talks have been slowed in part because of New York's change in governor, with Kathy Hochul taking over in late August following Andrew Cuomo's resignation.

Hochul, a native of Buffalo, has already had contact with PSE officials.

"No one is more committed to keeping the Bills in Buffalo than Gov. Kathy Hochul, a long time Buffalo Bills fan," read a statement from the governor's office released to the AP on Aug. 30. "Negotiations are ongoing, and her administration looks forward to sharing details with the public as soon as negotiations are completed."

The $1.6 billion cost of Metlife Stadium, a New Jersey facility opened in 2010 and shared by both the NFL's New York Giants and Jets, was entirely privately funded. By way of comparison, the Minnesota Vikings' $1.1 billion U.S. Bank Stadium, unveiled in 2016, had taxpayers fund 45.2 percent of the cost.

In Orchard Park, Highmark Stadium's $22 million construction tab in the early 1970s was picked up entirely by taxpayers.

The Bills have ruled out the option of further renovations because of the team's belief that they would be cost prohibitive in comparison to starting fresh.

In 2014, a New York state-commissioned study projected the next round of renovations to Highmark Stadium would cost $540 million, with much of the work dedicated to rebuilding the entire third deck of the stadium. That cost is projected to be much higher in current dollars.

The AP reported that the Pegulas, who purchased the Bills in 2014, have spent an additional $146 million on capital and game-day and stadium-related expenses, which included suite upgrades, a new training facility and expansion of practice fields.

PSE financed an extensive analysis in 2018 focusing on three potential stadium sites in and around Buffalo before opting to propose building the facility on a Bills-controlled parking lot adjacent to its current home.

The two other locations considered were on the University at Buffalo campus north of the city, and a downtown site on the land where the abandoned Perry Projects sit empty. The AP's source noted that PSE determined that the projected cost of a downtown stadium came to $1.9 billion, not including necessary infrastructure upgrades.

But sports economists have pushed back on how much of an impact sports facilities have on local economies, and question whether taxpayers should share the burden of the costs. NFL stadiums are seen as prime examples of having limited impacts because pro football teams only play regular season eight home games per season.

"The answer is zero: Sports stadiums are no catalysts for economic development," University of Chicago economist Allen Sanderson told the AP. "They just largely enrich the team and the league and the owner of the franchise."