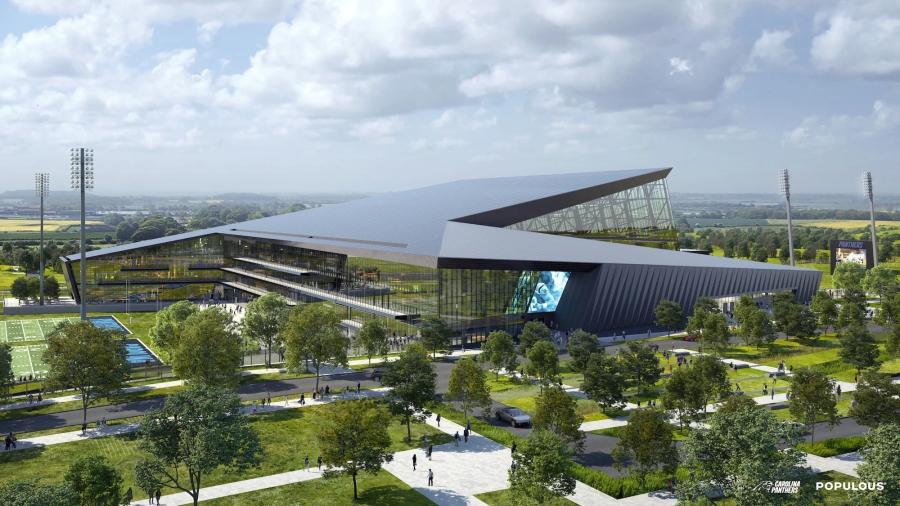 Carolina Panthers' owner David Tepper's real estate company announced April 19 that it has terminated its agreement with the city of Rock Hill, S.C., leaving the future of the NFL team's planned $800 million headquarters and practice facility up in the air.

The news comes on the heels of the Panthers announcement in March that the team was pausing construction on the 240-acre project after failing to receive bonds from Rock Hill to pay for public infrastructure at the site.

Tepper, a hedge fund manager and the NFL's richest team owner worth an estimated $11 billion, had invested more than $175 million into the facility, located about 25 mi. south of the team's current downtown stadium and offices in Charlotte, N.C.

A spokesperson for Tepper's GT Real Estate Holdings said in a statement to the Associated Press the Panthers are prepared to sit down with Rock Hill officials and other interested parties to "discuss the significant challenges ahead."

According to Tepper's company, Rock Hill failed to issue the bonds or provide the funding for the public infrastructure for the project in early 2021. The statement from GT Real Estate Holdings noted that it negotiated with the city for more than a year, warning Rock Hill officials that they had 30 days to comply, or the Panthers would pull out.

"It is unfortunate that some recently decided to conduct a misguided, destructive public relations campaign to obscure their failures," the statement read.

In its response to the notice from GT Real Estate Holdings, the city responded by calling the Panthers' announcement "misleading and erroneous," and said that it embraced the team, welcomed its headquarters to South Carolina, "did everything to make this project a success and has not defaulted on any of our obligations."

In separate statement to the AP, the city of Rock Hill added, "It was and remains our intention to continue negotiating in good faith while protecting the interests of our taxpayers. In fact, in the past few weeks we have attempted to meet with the Panthers on numerous occasions to no avail."

Rock Hill's response also explained that the city could not provide the Panthers with unlimited resources.

The Carolina Panthers headquarters and practice facility were expected to be completed in 2023.

If an agreement can somehow be finalized between the two parties, and the facility is finished, the team would conduct business in Rock Hill and hold practices and training camp at the new campus, while continuing to play games at Bank of America Stadium in Uptown Charlotte.

Team plans for the site included a more than 620,000-sq.-ft. headquarters facility and 113,000-sq.-ft. outdoor multipurpose stadium with 5,000 seats. The indoor practice site, with 500 seats, was envisioned with capabilities to host community events in addition to team functions.

Separately, the Charlotte Observer reported the South Carolina Department of Transportation (SCDOT) started work on a $40 million Interstate 77 interchange project to serve the practice facility. State officials plan to complete the roadwork because it still can serve economic development in the area.

So far, SCDOT has awarded $16.4 million in contracts for the new interchange.

Gov. Henry McMaster called the Panthers announcement a "disappointment" in a statement to the AP.

"We had hoped they would be a part of South Carolina's record-breaking, booming economy," he said.

The Observer reported that to lure the Panthers to the state, lawmakers passed legislation promising $115 million in tax breaks to the team, which planned to bring 150 employees to Rock Hill from Charlotte. The NFL team would have been exempt from paying state income taxes for players, coaches, and other employees for 15 years. The tax breaks will no longer apply if Tepper does not build in the state.

The Charlotte news source noted that York County also presented an alternative financial package to salvage the project. Under the resolution, the Panthers would have received incentives for four decades in exchange for completing $225 million of public infrastructure at the site. A requirement of the county's proposed plan was that the team, city and county release each other from prior financial contracts to allow for a new one.

"It's frustrating that time and again the Panthers organization won't take ‘yes' for an answer," said state Sen. Wes Climer.