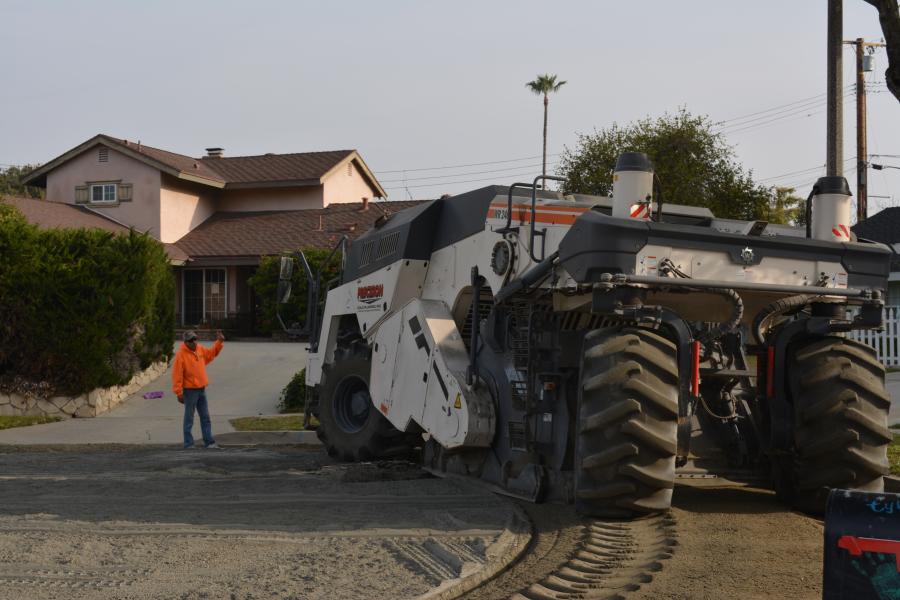 Full Depth Reclamation (FDR) coupled with soil stabilization is rapidly becoming the norm in repaving jobs, and no one typifies the move to the “green” processes more than Precision Cold Planing of Yucaipa, Calif.

Full Depth Reclamation (FDR) coupled with soil stabilization is rapidly becoming the norm in repaving jobs, and no one typifies the move to the “green” processes more than Precision Cold Planing of Yucaipa, Calif.

“We got into this business three years ago”, said Rob Rozhon, president of PCP. “We had been in the milling business for several years when we purchased the assets of company going out of business.”

The company whose assets they purchased was involved in cold milling and soil stabilization and had two Wirtgen grinders — a W120 and a W2000 — as well as two Wirtgen pulverizers — a W2400 and a W2500.

Rozhon saw recycling and soil stabilization had a solid future and chose to broaden the horizons of his business. Also, he recognized Wirtgen as the leader in the field.

“When we expanded the fleet we could not find any other machines of the same quality,” he explained. “They are the leader and their products reflect that.”

In early March, when the milling of the existing pavement on residential streets in the Sequoia Ave/Rolling Meadows area of Fullerton, Calif., exposed an inadequate subgrade, paving contractor RJ Noble called on Rozhon's company for help in the stabilization process. The compromise of the existing subgrade was dramatic enough that even city garbage trucks were unable to get around. Neighborhood residents were asked to park on adjacent streets and walk to their homes.

Robert Rineer, of the engineering firm of Smith-Emery Laboratory was consulted. He determined that the city of Fullerton's desire to have a mixture of 6 in. (15.24 cm) of the existing aggregate along with the clay base and 5 percent cement added would adequately stabilize the subgrade.

Two passes were made with PCP's Wirtgen 240i cold recycler and soil stabilizer. The first, a dry mix pass, introduced the cement into the subgrade. On the second pass water was added. The two pass method results in a more thorough mix of the cement and aggregate, according to Rozhon.

“The answer 10 years ago would have been to rip up and replace” Rozhon said of the Fullerton job. “But there are so many advantages to this process”.

Among the advantages cited by Ruzhon are a better overall quality subgrade and a huge reduction in the amount of hauled away from the job site.

The Fullerton job, like most, had its own set of challenges. One of the streets was a tight cul de sac. There was little room for maneuvering recycling equipment and water trucks. Additionally, the intersection of Rolling Meadows and Sequoia is a busy intersection near an elementary school. Since residents were being forced to park on neighboring streets and off the weak subgrade, time was also of the essence.

“The Wirtgen 240i performed well, as always” remarked Rozhon when the three-day job was completed. His company left the streets ready for paving later that week.

Started in 2001 as a milling contractor, Precision Cold Planing has grown to be a major player in cold planning, pulverization and soil stabilization in Southern California. The small family business has grown to 25 employees. They work with small paving companies as well as large freeway contractors.

Rozhon's company has seven milling and soil stabilization machines, the latest another 240i purchased in July of 2015.

“When we decided to expand the fleet, there really was an obvious choice,” he said. “We called Nixon-Egli and got things moving.”

“We were in market but Wirtgen was in a backlog situation,” he said. “Nixon-Egli gave us a demo machine which we used for five months until our new machine arrived.”

While Rozhon said Nixon-Egli has been great to work with throughout the relationship, he singled out Mike Burns, NE's Wirtgen product support specialist.

“Mike has been great,” he said. His support was critical in us staying with the Wirtgen product.

Nixon-Egli Equipment Co. specializes in road construction equipment, parts and service. The company serves all of California with offices in Ontario and Tracy. It also sells and service cranes and municipal equipment. In addition to Wirtgen, Nixon-Egli sells Leeboy, Link-Belt, Vogele, Johnston, Kleeman, Hamm and several other lines.