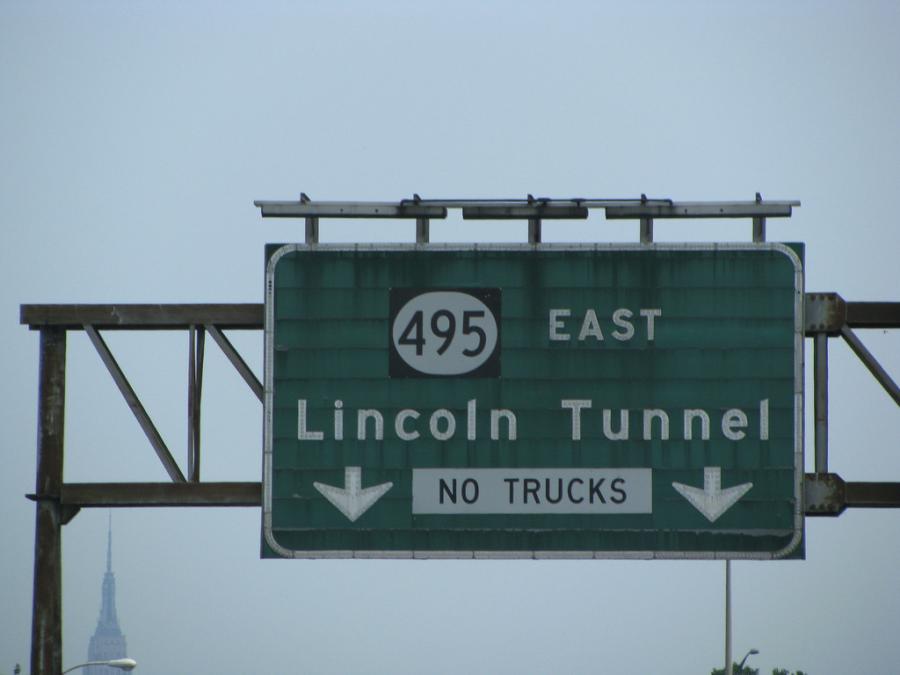 Commuters should learn the multiple alternate driving routes and public transportation options that are available to them, and be prepared to try several options in the first days and weeks of the closure to find the route or mode of travel that best meets their needs while minimizing inconvenience.

New Jersey Department of Transportation (NJDOT) Commissioner Diane Gutierrez-Scaccetti has strongly urged motorists who take Route 495 to the Lincoln Tunnel to adjust their travel plans to avoid severe traffic congestion expected for the next two-and-a-half years, as necessary lane closures begin to rehabilitate the Route 495 Bridge over Route 1&9 and Paterson Plank Road in North Bergen.

“We understand this construction, which is critically needed, will result in a tremendous amount of pain for everyone who lives and travels in this corridor,” Commissioner Gutierrez-Scaccetti said. “The increase in the gas tax provided the funding to make these necessary investments and improvements to our aging infrastructure, so we can avoid the potential for unimaginable disruptions that would occur if it were necessary to completely shut down Route 495.”

Commuters should learn the multiple alternate driving routes and public transportation options that are available to them, and be prepared to try several options in the first days and weeks of the closure to find the route or mode of travel that best meets their needs while minimizing inconvenience.

For those who live or work in Hudson County, one option is using the Hudson-Bergen Light Rail to and from Hoboken or Jersey City where commuters can utilize PATH trains or ferry service to Manhattan, which helps reduce the number of cars heading toward the Tunnel. For commuters coming from Monmouth County, there is ferry service with capacity from Atlantic Highlands, Belford, and Highlands.

To mitigate congestion during this project, NJDOT has been working with local officials, employers and commuters to promote several strategies including:

The $90.3 million state-funded project began in September 2017 with local street improvements. Construction will be accomplished in 12 stages. The work in Stages 1 and 2, which was necessary before the lane closures could be implemented, has been taking place under the bridge and along the Paterson Plank Road – Union Turnpike corridor, which will handle the diverted traffic during bridge construction.

The project will rehabilitate the nine-span viaduct including repairs and reconstruction of the concrete bridge deck, and the westbound exit ramps to Route 1&9 southbound and Paterson Plank Road northbound. The deck replacement will require multiple stages to maintain traffic while structural repairs are performed to replace and strengthen deteriorated structural steel, which will be painted to preserve the existing steel superstructure. Additional improvements, including new highway lighting, drainage, barriers, guiderail, attenuators and paving will improve operations and safety in addition to extending the viaduct's useful life.

There are eight stages to the bridge deck portion of the project, which is expected to last for about two and a half years. The entire project is expected to be completed in summer 2021.

Stage 3, the first of the eight bridge deck stages, began on Friday, August 10 by closing the access to Route 495 westbound from the 31st Street ramp. Traffic utilizing the 31st Street ramp from Kennedy Boulevard is detoured to Paterson Plank Road. Closing this ramp removes approximately 1,200 vehicles from entering Route 495 westbound during the peak commuting times, which will allow traffic coming from the Lincoln Tunnel to flow better.

The exclusive bus lane (XBL) is a contra-flow transit lane along Route 495 from the NJ Turnpike to the Lincoln Tunnel and is considered the busiest and most productive bus lane in the nation. Each weekday, the XBL dedicates a westbound travel lane to eastbound buses during the morning commute from 6 a.m. to 10 a.m.  Each day more than 1,850 buses carrying more 63,000 passengers travel from the North Bergen Park and Ride, west of Route 1&9, across Route 495 through the Lincoln Tunnel to the Port Authority Bus Terminal in midtown Manhattan. The XBL lane will be maintained during all stages of construction.

The Route 495 Viaduct is a nine span bridge that carries traffic over the NYS&W and Conrail rail lines, as well as Route 1&9, Paterson Plank Road and Liberty Avenue in North Bergen, Hudson County.  Route 495 opened in 1939 and originally provided access between Route 3, Route 1&9 and the Lincoln Tunnel. In 1952, the roadway was extended west and a new interchange with the NJ Turnpike was constructed.

Each weekday more than 150,000 vehicles (eastbound and westbound trips combined) travel the 3.45-mile length of Route 495. Truck and bus percentages range from 15 percent to more than 30 percent depending on time of day.

The Route 495, Route 1&9/Paterson Plank Road bridge deck is in poor condition and the structural framing and supporting piers have areas of severe corrosion and section loss. The purpose of this project is to restore the structural integrity of the bridge, extending its service life for an estimated 75 years, and minimize the need for future emergency repairs, which impact traffic operating conditions.

The North Bergen Park and Ride Lot is located beneath the Route 495 viaduct immediately west of Route 1&9. NJ Transit Bus Route 320 – Mill Creek, Harmon Meadow, N.Y., operates at the Park and Ride and travels to the Port Authority Bus Terminal in Manhattan, New York City. The lot has more than 1,500 parking spaces. The parking spaces that are located below the bridge will be lost temporarily during construction. Therefore, a new temporary parking area was built adjacent to the existing lot during construction that added a net gain of 136 spaces.

NJDOT completed an Intelligent Transportation Systems (ITS) project along the Route 495 corridor involving the placement of new electronic signs and closed circuit television cameras to assist in managing traffic through the construction zone. The following ITS equipment is in-place and operational:

NJDOT created a project-specific website – www.RestoreNJ495.com – where commuters can sign up for project alerts. The website also contains a wealth of information about the Route 495 Bridge rehabilitation, and will be updated with relevant new information as work progresses. The Department is carefully coordinating the Route 495 Bridge rehabilitation project with other regional transportation infrastructure projects to minimize traffic congestion.

The Department has a project hotline telephone number: 201-408-8495, and email: [email protected] Anyone who has questions, concerns, or suggestions is encouraged to contact the Project Outreach Team as work progresses.

NJDOT will be using Variable Message Signs to provide advance notification to motorists of traffic pattern changes associated with the work. The precise timing of the work is subject to change due to weather or other factors.

Follow the project on Twitter @RestoreNJ495 and get real-time information on traffic conditions at www.511nj.org, where a widget will enable you to cut through all the other traffic information and focus in on the Route 495 area.