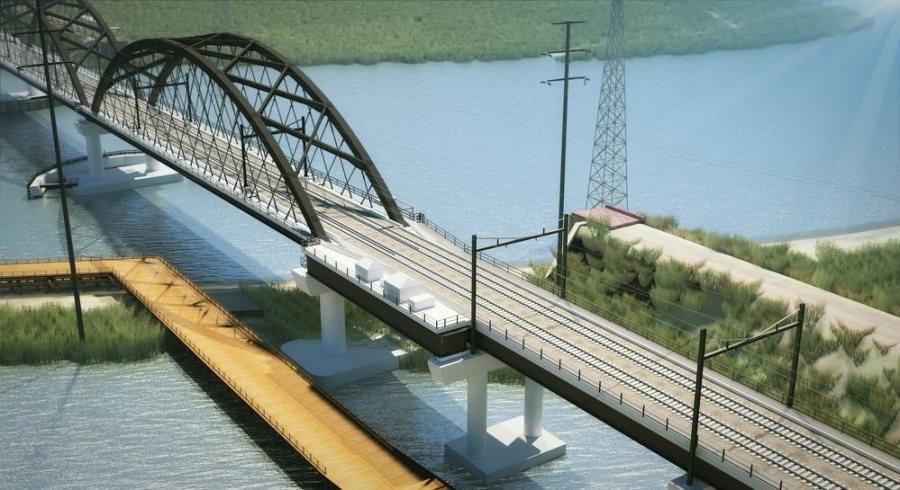 At an estimated cost of $1.6 billion dollars, a two-track replacement structure known as Portal North Bridge is closer to becoming a reality. While main construction has yet to begin due to money issues, early work on the project in Kearny and Secaucus, N.J., is complete, and not a moment too soon.

"Replacement of Portal Bridge, a 108-year-old swing bridge over the Hackensack River that carries 450 trains per day, is one of the most urgent infrastructure priorities for Amtrak and the Northeast Corridor," said Craig Schulz, Gateway Program Development Corporation (GDC) spokesman. "The century-old bridge must swing open to allow boats to pass underneath, and often fails to close properly, leading to a cascade of delays that can ripple throughout the Northeast Corridor." 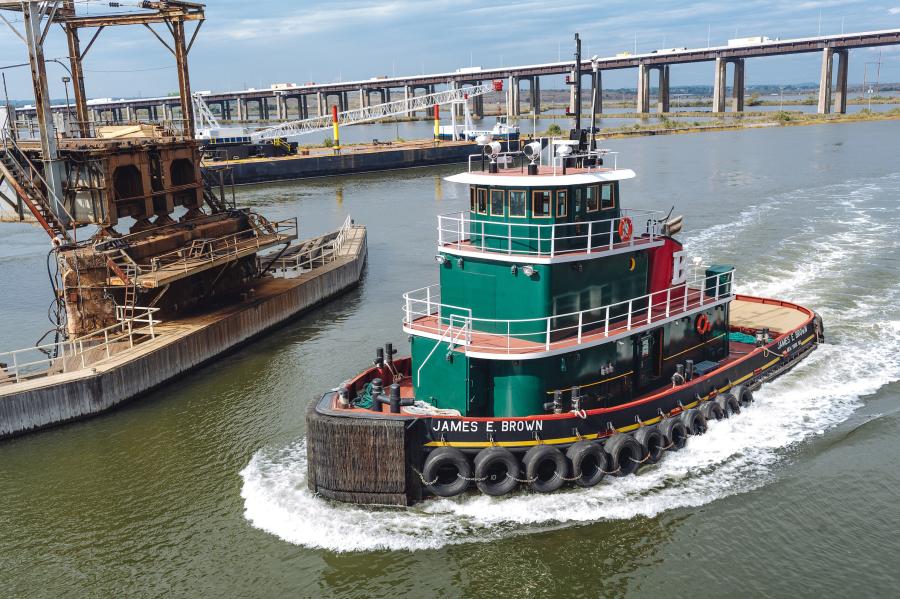 "The century-old bridge must swing open to allow boats to pass underneath, and often fails to close properly, leading to a cascade of delays that can ripple throughout the Northeast Corridor," said Craig Schulz, Gateway Program Development Corporation (GDC) spokesman. (Amtrak photo)

Schulz said the project will replace the bridge with a modern, higher clearance, fixed span bridge, allowing faster speeds, increased reliability and a 10 percent increase in NJ Transit capacity. Funded by a $16 million TIGER grant and $4 million local match, the initial work involves utility relocation and construction of a finger pier and retaining wall, among other elements.

"The intent is to complete these long duration items to enable the next phase of construction to be completed more expeditiously. The financial plan we've submitted to the U.S. Department of Transportation includes $600 million of bond proceeds by the State of New Jersey, contributions from Amtrak, and seeks approximately $800 million from the Federal Transit Administration's [FTA] Core Capacity grant program.

"The project has all its necessary permits, and is shovel-ready. The only thing delaying the start of construction at this point is federal funding."

Schulz noted that the new Portal North Bridge will have greater clearance over the water and not have to open or close for marine traffic, meaning a more reliable, safer and faster commute. This will result in fewer delays and less frustration for Amtrak and NJ Transit riders making 200,000 daily trips.

The current bridge sometimes gets stuck in the open position, with workers forced to bang it shut with sledgehammers. Schulz said a fixed-span bridge is clearly the solution.

"Having a moveable bridge in the busiest section of the Northeast Corridor is less than ideal, and because of its frequent failures, the bridge is sometimes referred to as the Achilles' heel of the Northeast Corridor. Eliminating the moveable span with a fixed-span will increase safety, speed and reliability for passengers, while creating efficiencies in terms of maintenance cost that benefit all users. 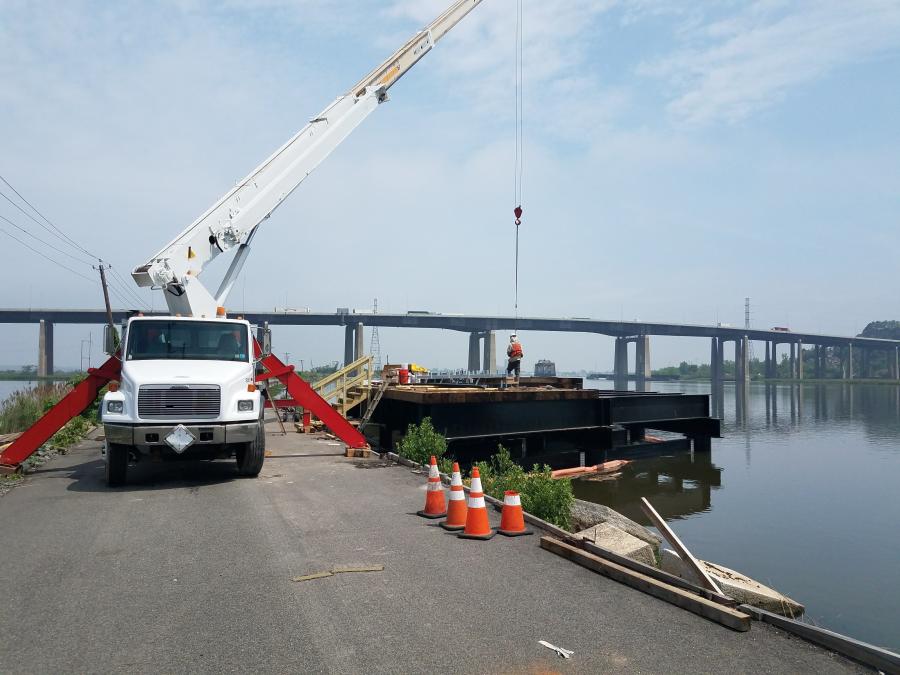 At an estimated cost of $1.6 billion dollars, a two-track replacement structure known as Portal North Bridge is closer to becoming a reality. (Amtrak photo)

"Even if the existing Portal Bridge was in good mechanical condition and didn't have such reliability issues, it's extremely costly to perform the necessary testing, maintenance and repairs to the multiple systems that make the bridge swing. As long as we have a moveable bridge in this location, Amtrak is obliged to spend this money maintaining it to ensure marine traffic can pass through the river channel."

Early construction tasks on Portal North Bridge began in October 2017, and were recently completed. The schedule for major construction is approximately five years. Planning has been extensive.

In July 2009, the final design phase of the project commenced by Portal Partners. Five months later in December 2009, a construction management (CM) contract was awarded to the CM Team led by AECOM and STV, Inc. to begin providing constructability reviews of the project.

"From a political standpoint, securing the federal funding necessary to start major construction remains a challenge we are actively working to overcome," said Schulz. "From a technical point of view, the new tie-ins at each end of the project will present a challenge, and limited site access will be a valuable commodity throughout the construction phase.

"The newly installed track, catenary, signal and communications systems will need to be connected to the existing systems before the new bridge and track can be put into service. This will require some track outages, and much of the work will be completed on nights and weekends to minimize impacts to NJ Transit and Amtrak customers."

The project site is located in close proximity to existing marshlands, with some construction activities taking place in the Hackensack River.

"Appropriate measures will be taken to prevent construction activities from adversely impacting these environmental resources. In addition, there will be restrictions imposed by the New Jersey Department of Environmental Protection on when the contractor can work in the river, where such restrictions include moratoriums limiting when construction work can take place due to the fish migration season." 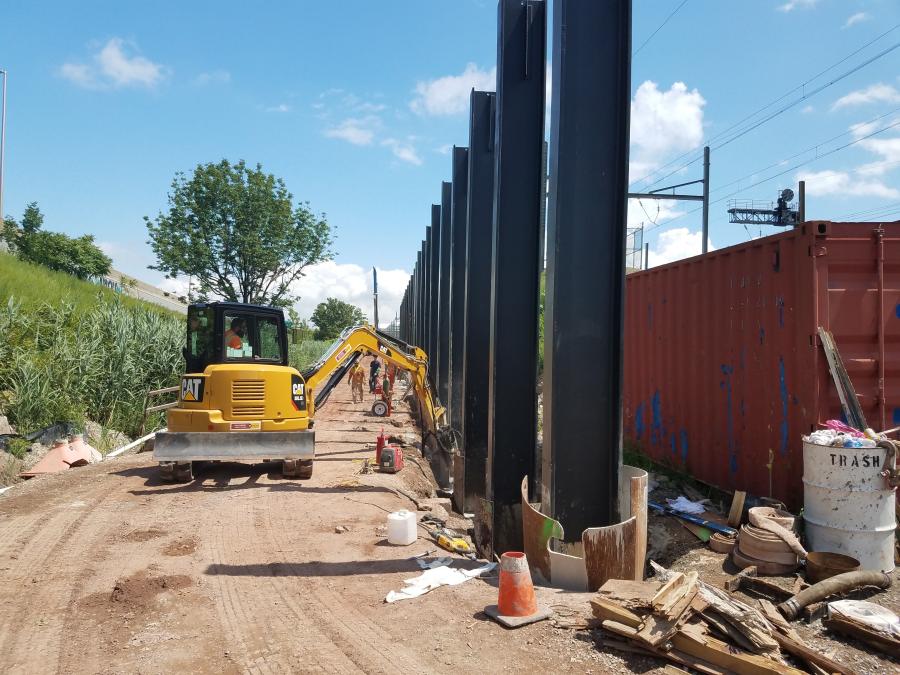 While main construction has yet to begin due to money issues, early work on the Portal North Bridge in Kearny and Secaucus, N.J., is complete. (Amtrak photo)

According to Rich Cross, vice president, Gannett Fleming, "The biggest challenge is replacing approximately 2.5 miles of Northeast Corridor infrastructure while minimizing impact to rail operations in a very busy, complex environment. By building the larger elements of the river bridge, approach structures and rail systems off-line and then allowing for the cut-overs to occur during weekend outages, this is hoped to be accomplished."

Rob Edwards, NJT senior director, capital project management, added, "An in-depth analysis and simulation of rail operations during these times has been conducted and will continue to be modified as the project progresses."

Scott Clinton, Amtrak manager, capital construction, said the assembly of several sections of two giant steel support poles had to be installed as part of the early construction.

"Those are the two monopoles which carry the transmission lines that power the trains running along the Northeast Corridor. The project required removal of one of the existing monopoles, as it's directly in the path of the new Portal North Bridge. The engineers designed two monopoles to route the high-voltage circuits over the railroad, so that the new bridge approach can be built.

"The poles were raised in October and Amtrak linemen worked throughout November to run the transmission lines between them and disconnect the lines from the pole we are removing, all while ensuring there is sufficient power to operate trains in and out of New York along the busiest part of the Northeast Corridor." 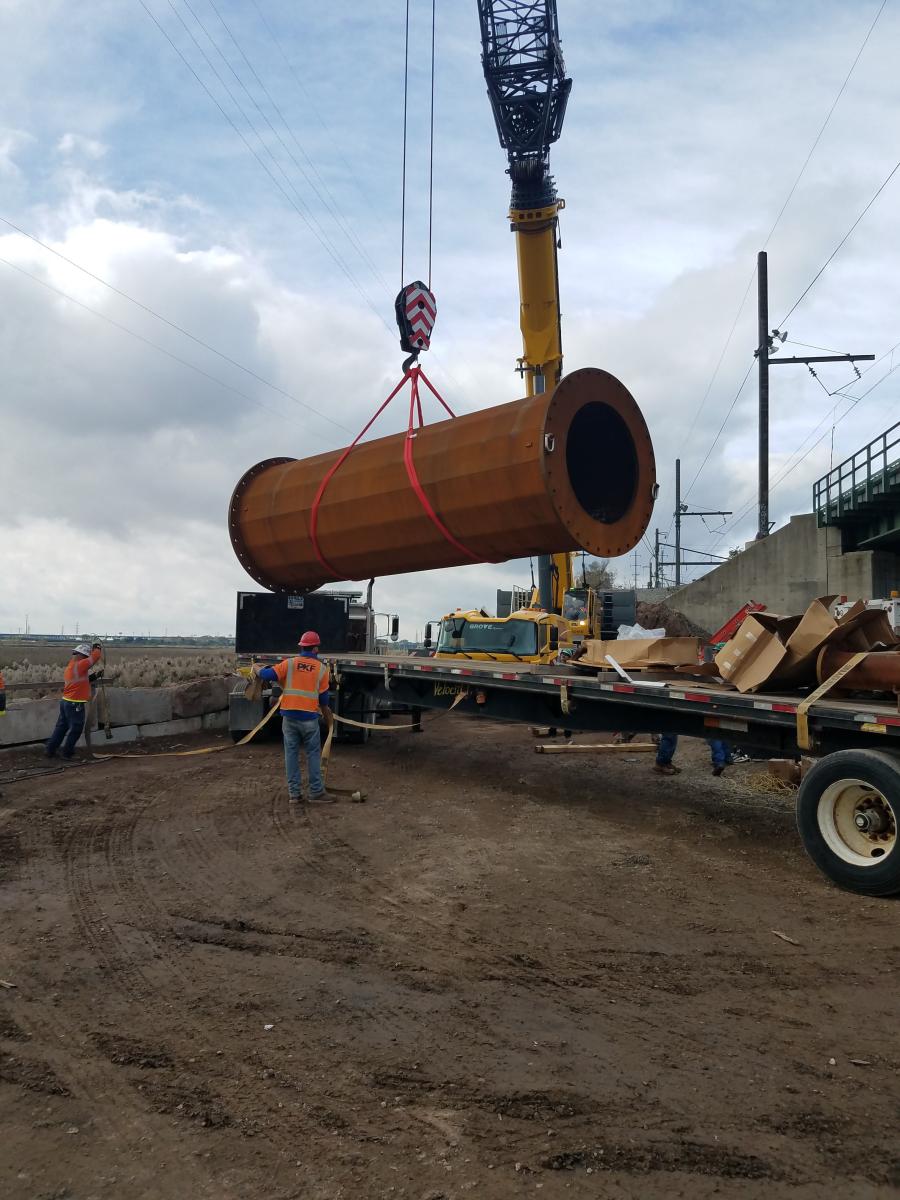 According to Jim Takas, project construction manager, STV Corporation, the two steel monopoles measuring up to 212 ft. in height were erected in October 2018. (Amtrak photo)

According to Jim Takas, project construction manager, STV Corporation, the two steel monopoles measuring up to 212 ft. in height were erected in October 2018. Prior to erecting both monopoles, two large diameter drilled shaft foundations had to be constructed.

"The foundations varied in diameter from six feet to 12 feet and extended to depths of up to 105 feet below the ground surface. Reinforcement cages were constructed on-site and lowered into both drilled shafts, which were then filled with concrete and anchored into sound bedrock in June 2018. Erection of the steel monopoles consisted of a joint effort between the contractor and Amtrak forces.

Construction crews erected the poles section by section, with each section approximately 40 ft. in length, by bolting them together and applying final tension to each bolt. Davit arms were connected and Amtrak forces took over the realignment of the 138kv transmission line from the existing monopoles over to the newly installed monopoles.

"The construction of the retaining wall initially consisted of driving 36-inch diameter steel cans to a depth of approximately 40 to 50 feet into the ground to bedrock," said Takas. "Simultaneously, as the water table is quite high in this area of the project, a ‘dewatering' initiative had to be undertaken to capture and appropriately dispose of groundwater that may have contained contaminants harmful to the environment. Steel H-piles, spaced at 10 ft. apart, were then driven inside of the 36-in. diameter steel cans and socketed into the bedrock strata.

"Above ground, the height of the piles generally matched the elevation of the crossties of the adjacent, existing railroad. This activity was followed by the placement of concrete inside the steel can, to ensure verticality was achieved for the multiple, side-by-side steel H-piles erected along the entire 560-foot length of the wall."

The wall was constructed of several pre-cast concrete panels, and carefully laid between each of the vertical steel columns. A pervious cellular concrete fill was then deposited behind the retaining wall to complete construction of the new 560-ft. long railroad embankment section. A steel handrail was erected atop the retaining wall for the safety of future railroad workers. 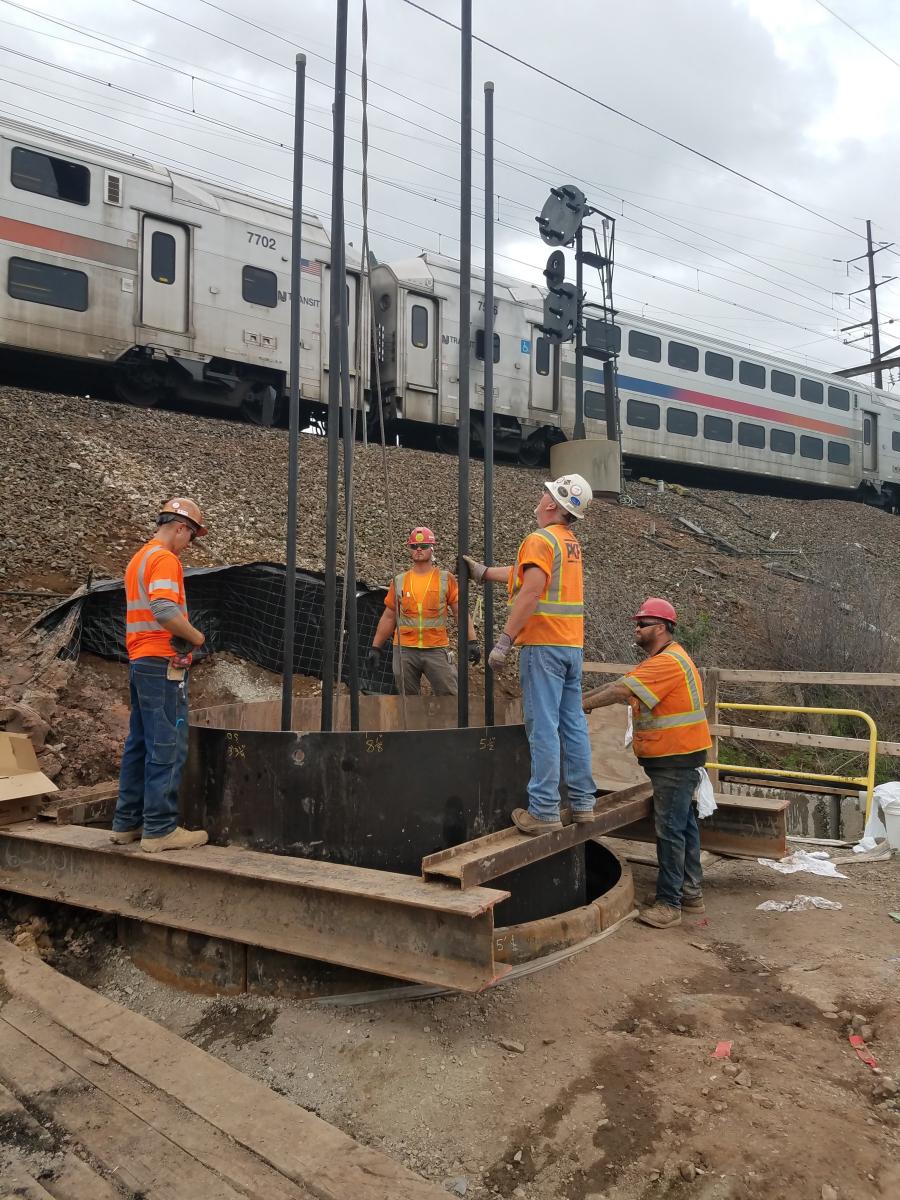 Construction crews erected the poles section by section, with each section approximately 40 ft. in length, by bolting them together and applying final tension to each bolt. (Amtrak photo)

"The unique feature of the network-tied arch construction is the use of inclined hangers, instead of the more typical vertical hanger arrangement. With this network hanger system, the bridge will have increased strength and stiffness. This allows the new bridge to span greater lengths, increase clearances for mariners and reduce deflections for improved passenger comfort when traveling at 90 mph."

Some of the key steps required to build the new bridge are mainly related to construction of the river spans.

"Initially, installation of the drilled shafts and foundation caps in the river to support the new piers will be required," said Konrad. "There are permitting requirements affecting some elements of the work, which will require well-planned procedures.

"In addition, deliveries to the site must be efficiently orchestrated, and the addition of the two new finger piers will allow for barge deliveries of needed materials to advance construction. Steel erection of large and heavy members, properly planned and placed over the river, will be required for the network-tied arches and the steel flooring system."

Although the project has endured two northeastern winters, weather has not been a major problem.

"Only one rainy period has been encountered, so far, that expectedly and sporadically hampered progress on the project for a couple of days," said Edwards. "With a construction period anticipated to last over several years, inclement weather has to be accounted for in the preparation of the project's construction schedule. However, with foresight exhibited by the project's team members, emphasis has been placed on recognizing that periods of bad weather will be encountered, causing work activities to be suspended, but leading to the preparation of a far more reliable construction schedule and completion date."

Clinton noted the elements did become an issue during the raising of the monopoles.

"We couldn't fly the steel sections in wind speeds above 17 mph, and in this location at this time of year, wind became a factor. Also, the aerial platforms we were using could only operate in sustained wind speeds up to 28 mph, so re-profiling the transmission lines took longer than originally planned."

The work areas were mostly meadowland/marsh. There was activity building a finger pier in the Hackensack River, but it was directly off the shore line and handled by use of a barge and support equipment from the dike wall road. The fiber optic pole site is entirely in the Cedar Creek marsh. The contractor needed to build a timber mat access road to perform the work, in order to avoid disturbing existing wetlands. 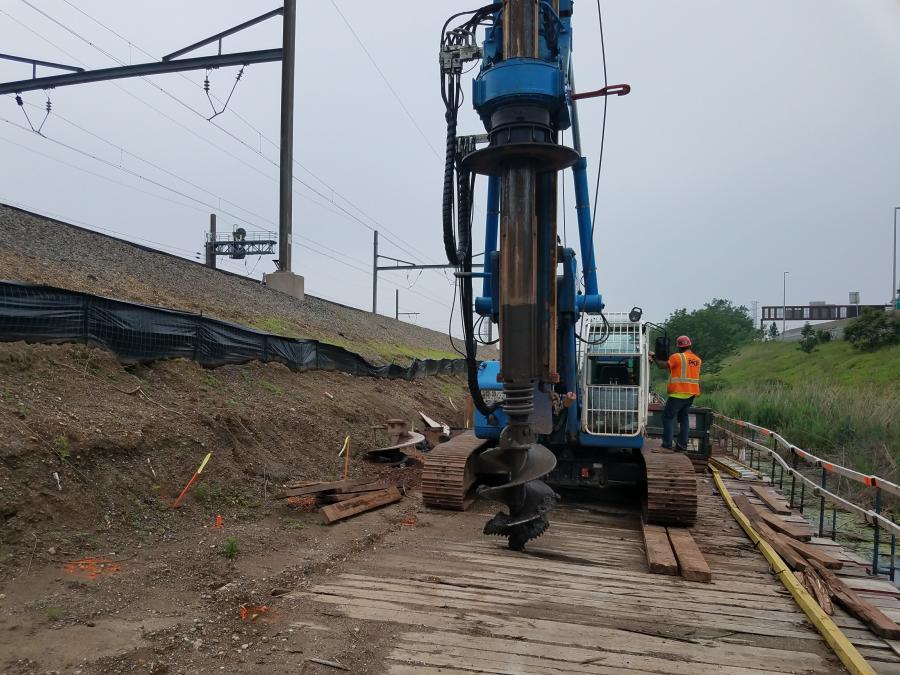 On the project, the contractor has used small to mid-sized cranes, man-lifts, excavators, bulldozers, backhoes, tri-axle trucks, a barge, concrete trucks and pile driving rigs. During the next phase of construction, heavy machinery is expected to be augmented by multiple larger cranes on both land and barges, front-end loaders, milling and paving equipment and graders.

Materials used during construction include 47 million lbs. of structural steel. A total of 14 million lbs. of reinforcing steel also is required, along with 219,000 cu. yds. of concrete, assorted drilled shafts and 7 mi. of contact wire.